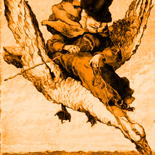 As kids, most of us listened to nursery rhymes; as adults, many of have read nursery rhymes to our own children or grandchildren. But seldom do those verses show the nursery rhyme parents. To remedy that oversight, here’s a brief look at one parent.

“Say there. Piper. I haven’t seen you at the bus stop for about a week now. I hope everything’s okay.”

“Okay? You got kids of your own. You oughta know. I just don’t know what to do. I’ve been having problems with my sons. They’re both getting hard to handle. Even my daughter Mary’s getting on my nerves. My wife says not to worry, it’s just a phase, but—”

“What kind of problems are you having?”

“Why’d he do something like that? What’d he do with it?”

“Do with it? He ate it. Didn’t even share with us. He had a bunch of his friends over. Smoked some pot. Ate the pig.”

“Ate it. The whole thing? How’d you handle it?”

“Handle it? What do you think? I beat the kid. Tom went crying down the street.”

“Good for you. What about your other son?”

“I can see where you’d be upset. Pickled peppers.”

“A whole peck of the damn things.”

“It’s tough being a parent these days, that’s for sure.”

“You said Mary’s giving you trouble. That’s hard for me to believe. She seems like such a sweet girl.”

“Used to be. I can hardly stand to be around her any more. She’s getting more contrary every day. Last month she tried to grow a garden. Instead of vegetables, guess what she got?”

“Yeah. Would you believe it?”

Pit Mr. Piper more than Mother Goose: he lives in something worse than a shoe. He lives in a world of children. – Tyler Malone

"My thirteen published books include five books of poetry, three young adult novels, a children’s book, a textbook on writing poems, and three books of my interviews with major league baseball players, most recently When Baseball Was Still King (McFarland 2012). When I’m not busy writing or reading, I can usually be found on a ballfield, where I play about eighty baseball and softball games a year. I live in Seneca, SC, with my wife Polly and our two toy poodles. For more information, please visit www.genefehler.com"