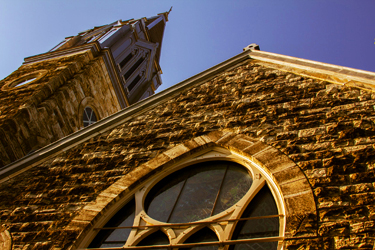 In the summer of 1956, on any Saturday at midnight, especially when the moon was out and the stars were bright, you would be able to see Grandma Groth sitting on her front porch swing waiting for her son Clarence, a bachelor at 53, to make it home from the Blind Man’s Pub. He would have spent another evening quaffing steins of Heineken.

Many times that summer, before I went away to college, I’d be strolling home at midnight from another pub, just steps behind staggering Clarence. Unlike Clarence, I’d be sober, so I’d always let him walk ahead of me and I’d listen to him hum “The Yellow Rose of Texas.” Sometimes, very quietly, I’d join in. I don’t think he ever heard me.

However, on the last Saturday night that Clarence and I came down the street in our odd tandem, I didn’t see Grandma on her swing even though the stars were out and the moon was full. For some odd reason, on this particular night, she wasn’t waiting to berate him.

So far so good, I thought, for Clarence. He won’t have to listen to Grandma give him hell. But then, not far from his house, and without warning, he toppled into Mrs. Murphy’s hedge. It was like watching a sack of flour fall in slow motion off a truck.

When I finally got him up, I managed to maneuver Clarence slowly down the sidewalk toward his house. He didn’t make a sound but it wasn’t easy moving a man that big who was essentially asleep on his feet.

Somehow I got him through his back door only to encounter Grandma, a wraith in a hazy nightgown, standing in the hallway, screaming. She began thrashing Clarence with her broom, pausing only for a moment to tell me,

“Go home to your mother now so you won’t be late for Mass. It’s almost Sunday morning!”

After that, she resumed thrashing Clarence. He never made a sound, just took the blows across his back, head bowed, without moving. But Clarence was a man who said very little even when he was sober.

After that sad night in 1956, I never saw Clarence again, either marching to work in the morning, his lunch pail gallantly swinging, or staggering home at midnight from the Blind Man’s Pub.

But many a midnight after that, years later, I’d be coming home from the other pub and I’d see Grandma reigning on her front porch swing, broom in hand, waiting. Maybe Clarence was coming, I thought. But if he was, I never saw him.

I remember coming home from college every summer and asking the neighbors if they had seen Clarence. Not a sign of him, they said. But on a Saturday night when the moon was out, they’d still see Grandma, on her swing, waiting.

Now, so many decades later, as I stroll home at midnight, after an evening at the Blind Man’s Pub, I can see the moon is as big as it was the last night I saw Clarence.

I realized I’m older now than Clarence was the night he disappeared. And even though Grandma’s been dead for many years, I can see her in the starlight. She’s sitting regally on that swing, broom in hand, waiting. So for old time’s sake, I give her a big wave, hoping to hear her say, just one more time: “Go home to your mother now so you won’t be late for Mass. It’s almost Sunday morning!”

Most days, we say that all we want is Saturday. On Saturday night, though, as we live off of bottles and canned lips, our inner desires become personal truths: we want the past, we want an easier time—when all we had to do was listen to our elders and Heaven would be waiting for us. – Tyler Malone