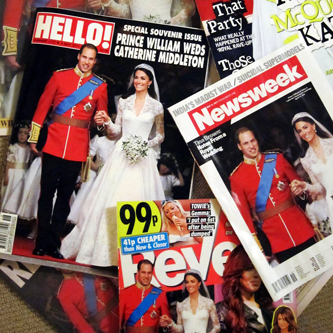 “The initial word of her pregnancy came in a flurry on Monday from St. James’s Palace,” said the NBC news anchor Natalie Morales as she stood in the winter sunshine outside the King Edward VII’s Hospital in London.

Susie turned off the TV and dropped the remote on the coffee table in front of her chair. She felt no ill will towards Kate Middleton. The news said she was the great-great-granddaughter of a coalminer on her mother’s side, so Susie thought her grandfather, who had worked down the mines in Pennsylvania, would have liked that. What Susie resented was the flurry of news-reporting, just because this lucky girl was 12 weeks pregnant. Sure, the child would likely become the King or Queen of England, in maybe 50 or 60 years’ time, whenever the dashing young Prince William died. So that was important, Susie got that. But why all the attention on just one unborn child? What about the 20,000 or more children who die every day out in the real world? She had read that figure in a magazine at the hair salon where she worked, and it had stuck in her mind.

Susie was no political activist. She had no time for politics. She was an average woman in small-town America, holding down two part-time jobs to earn enough money to pay the bills. People like her only got in the news if they won the Powerball lottery, or if they committed a felony, though that would probably make only the local news. Otherwise, the beginning, middle and end of her life, and the lives of billions like her, were not newsworthy. Was that fair? Susie guessed that fairness didn’t enter into it: it was what it was and what it will always be.

The news of Susie’s own pregnancy had certainly been greeted by a flurry of activity, to use the word the news channels loved so much. Soon after she told him the news, that jerk Michael who had got her pregnant upped and left town. His friends said they thought he’d moved to Pittsburgh, but had no forwarding address. Well, she’d always known he was a no-good drifter, so she blamed herself for being left alone with the problem. Then she had lost one of her two jobs—downsizing was the way her boss described it, but Susie knew it was because she had told him where to go when the dirty old creep started making sexual advances on her. Added to which she was now suffering from morning sickness, so bad that some mornings she felt too weak to get out of bed. She smiled to herself as it occurred to her that she had that in common with Kate too. But unlike the Princess in her swanky private hospital, Susie had no health insurance. She didn’t even have the cash to pay for a visit to the doctor’s office, so she would just have to make do. Anyway she didn’t think her symptoms were as bad as Kate’s, though she had noticed she was losing weight, and had started feeling light-headed. She took extra sugar in her coffee to try to give herself more strength.

It was on her walk to work that evening that Susie collapsed on the sidewalk. Snow was beginning to fall, and at first the passers-by who stopped to help her must have assumed she had slipped and fallen. Only when she seemed unable to speak did they call 911.

By the time the ambulance came she had lost consciousness. If she had seen it, Susie would have been amused by the flurry of activity in the Emergency Room as they tried to revive her. For a few brief minutes she was the centre of attention, as an IV was inserted into her arm and, after her heart stopped, she received massive jolts from the defibrillator. It was all too late, and soon they wheeled Susie away to the morgue, along the corridor past the waiting-room, where the TV was once again showing Natalie Morales in front of that other hospital in London.

Sometimes, and all writers know this, there’s something inside of you that’s as noticeable as a child. Man or woman, you’re pregnant with an idea. Much like any parent, too, you want that idea to mature; you want notice; you want justice for what’s burning inside of you. – Tyler Malone

"I am a retired foreign service officer now living in Maine. Since September 2012 I have been spending part of most weekdays writing short stories, ranging in length from a few hundred words to about 2500. My regime is that each morning my wife writes down a word, which is then the title for the story. I find it keeps my grey cells active."

One of my longer pieces, "The Bow-Tie", was recently published at BewilderingStories.com.