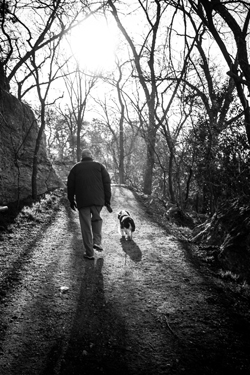 Under one of the oaks of the dense hammock, Bryan poured the last of the coffee from the thermos into the stainless mug.

It would have been good on ice, but it was strong coffee, and it would do and hold him over until they got to camp. The tiny myrtle warblers traded calls and flickered through the oak’s shadows.

The hound mutt lay across the only patch of light coming through the hammock, listening to the warblers, and Bryan remembered one of those mornings when he’d wake early and get out the muddy hiking boots and the lanky and lean pup would start running in circles in the small apartment. She knew what the boots meant, that the weekend had come, that they’d ride out in the old truck. No radio, only the dim dash light and a few of the big rigs’ headlights piercing the morning dark, riding out, she curled up beside him until he turned off the interstate. He cranked the windows to the cold wind, the dog intently watching the empty gas stations and the doublewides and dew-covered jacked-up trucks, and then the bandana-wearing workers out at the tomato farms. Downing the last sip of coffee, the old asphalt two-lane deeper into the country, shifting to overdrive, he let the truck take them out. He knew they’ll have to head back in a few hours, the dog dead tired, his boots caked in dirt. But driving out past the farms it was a new morning.

Those mornings were a long time ago, seven years—when they were alone, and now they were again.

Laying on her side, the hound watched him. Those were quite a few damn years, girl. But it don’t matter, now.

The dense cover of the oaks and creeping vines kept out the afternoon light. But ahead the horizon opened to the white light of the open scrub.

He finished the coffee, put the thermos back in the pack, and the hound mutt ran ahead, stopping to wait for Bryan to catch up the way she did as a pup. They hiked past the willow slanting towards the light that came sudden and bright, the silhouette of the tall man and the hound side by side now.

They hiked further into the light. He could only feel it warm on his neck and arms. It wasn’t the sharp sun of August. The sawgrass cut his legs, and across the land dead-flat, he could see the edge of the creek ahead.

As long as there’s coffee in the world, we can drink away all the heartache and all the girls. Is that true? Think about it as you walk lonely into the forested abyss. – Tyler Malone

Roger Real Drouin is a journalist. His short stories have been published, or are forthcoming, in the journals Potomac Review, Grey Sparrow Journal, Platte Valley Review, Pindeldyboz, and Pif Magazine. Roger writes a blog at rogersoutdoorblog.com. 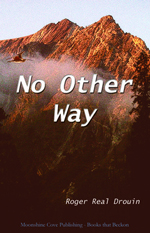