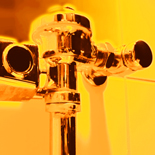 I’m gonna draw comics, for the prestige. Not for me. But for those all-over guys just like me, for every glimpse of doubt, for that stand-still paralysis and the way those moments can convince you something is missing… And something is always missing. If I can I’ll draw that on paper, because it’s the one thing I might tell myself if I could go back in time. Because of all the people starving out there, and Yoga classes won’t help. Going back to school won’t help. Macrobiotic food won’t help. A cuter girlfriend won’t help, not necessarily. More money won’t help, either. You gotta to give yourself that grand purpose, and it can be anything, in fact the more trivial the better, but you have to weld yourself to it, some big idea, to the exclusion of all else. Because like anyone, like everyone, probably, I still waver in and out from that feeling of being doomed to live on the outside. Man, I want to draw comics the way you’d ascend to the cloud-ringed summit of a mystical mountain. And the God’s truth is that you forget about getting to the top. You forget what you thought you wanted. You can pretend it makes you different, but deep-down, to your great relief, you begin to simply pray for just one good day after another…

Or at least this is what I’d tell myself while taking shits when I worked the Annex Bookstore on Fulton Street. It was because of those vaulted, operatic ceilings in the bathroom, and I could always hear a faint surge, like applause, from the foot-traffic on the cobblestones outside. Tiled floors and brass spigots, bathroom of champions. And I’d walk out shadowboxing, past the full-length mirrors down the corridor.

In the bathroom, what’s where we find what we want to love the most—the dreams what we see ourselves achieving. In that silent moment, there’s time to relax and think. Those moments don’t last long, though. We go into the bathroom to do business, and it’s always work. – Tyler Malone

Uzodinma’s favorite color is Aqua—no, Lapis. Or maybe Sky Blue. He still doesn’t own a cellphone... To hear him read his new epic story about fifth grade in the suburbs, Life of Jo-Jo, please click here.