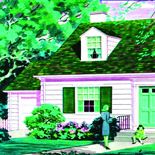 In the Yed Posterior system, the widely loathed planet DSM-IX gave rise to a race of lumpy beings known as Quacksalvers whose uncommon penchant for diagnosing their neighbors’ maladies drove everyone mad. (Yed Posterior should not nor could not be reasonably confused with Yed Prior, the commonly hailed region known for inventing naps.) At first, folks thought the case studies would lead to helpful therapies. Then, the Quacksalvers began peddling an emetic/laxative combo pill under the label Insta-Sane. As if retching and running to the commode were not enough, there was another appalling side effect. Namely, the drug actually worked. Surprised that their supposed placebo, in fact, produced a cure for all mental illness, the Quacksalvers promptly fired the pill’s inventor and pulled the drug from the market. Subsequently, the beings from Yed Posterior lived in floridly psychotic bliss and blatantly ignored attempts at treatment giving rise to the beleaguered response, “Whatever.”

Deep in the heart of Yed Posterior, Spanky’s Laundromat bore such a prodigious resemblance to Old Diamond Cleaners (a musty trap from my dubious days in Quadrant Three’s capital of Surnder) that I could not help thinking that it was. Everywhere I looked, signage bombarded my senses. “Thank you for not smoking,” hung on the half wall near the entrance. “We ask that you keep your little ones under control at all times,” shouted from above the vending machine. “Do not use bent or Alpha Centauri Quarters; they jam the machines,” warned patrons from above a rack of outdated magazines. “Hangers .05” “Plastic bags .35” Next to the “Thank you for not sleeping” sign, an untidy man fished for coins in his pocket.

“Mr. Adams? Rhonda Hillap.” I tried not to stare when handing him my card, but he had a ginormous occiput and a skull shaped like an inverted butternut squash. “I’m from HHD.”

“Do you have any quarters for small change?” he asked laying bits and pieces on the table. Under his left eye shone a purple waning gibbous moon, the remnant of a desperate brawl.

“My file says you’re looking for a Cape Cod?” I said handing him my quarters. “Which areas have you looked in?”

“I thought that was your job.”

“How long have you been looking?”

“Three weeks.” While Paganini’s Violin Concerto No. 1 escaped a cobwebbed speaker in the dimly lit corner, Adams unceremoniously dumped his smelly clothing into a washer. “Gotta go,” he said shoving the money into the machine.

“Wait.” I hollered after him. “You haven’t given me any information.”

“It’s in the file.” He said opening the door. “Let me know when you’ve found the house.”

Just then a slender woman wearing a nametag approached so stealthily that she would not have disturbed a flock of pigeons. She had an asymmetrical face, paisley-colored fractal eyes and appeared to cut her own bangs. Judging by the mottled look of her forearms, she bruised more easily than a ripe peach.

“Excuse me, do you know the man who just left? Can you tell me when he’ll be back?”

“Tonight. Late.” She said in a breathy half-whisper. “There’s a gift shop.” Behind a row of dust-covered plastic plants, a glass case proudly displayed some yard sale castoffs that the owner had been too lazy to donate or toss. Dog-eared copies of trashy romances rested next to a box of miscellaneous buttons. An opened deck of playing cards, a chipped hand mirror and some baby clothes rounded out the top shelf. I bent to notice the oddities on the lower shelf when, much to my chagrin, I saw it. “Rats!” There it was clear as day, a photo of Justice “Slim” Scalia and Justice “Babe” Ginsberg waving atop an Indian elephant. Somewhere on twentieth century Earth, that mischievous motorist Dorothy Levitt and that bloviating tub-thumper for quality children’s programming, Fred Rogers, giggled hysterically over crumpets and tea.

It was at that moment that I wished I hadn’t agreed to the dare. I clutched my Acme Metropolitan Bobby Whistle tightly—a gift from my late husband, it had proved to be one of the handiest things in the universe. I once had used my whistle to attract the attention of Alan Turing at a Garden Party when only a shrill burst of air would turn his attention from contemplating the hyperboloid of one sheet to the guests and fine cocktails. I had used my whistle on occasion while coaching practice events to remind my squad to play the man not the ball. My warbler had repelled unwanted advances from that lecherous breed the Snargle. In fact, according to our staff statistician, whistle blowing reduces the incidence of Snargle attacks by a whopping 60%. I grabbed a metal hanger, placed five cents in the jar and raced out into the street, where my QE-V stood at the ready.

Across the omniverse in a familiar Cape Cod, an unsuspecting couple prepared for bed. After a long day doing nothing, Kitty felt liked a squeezed lemon. She thumbed through a dog-eared copy of Sex for People Like You while Gill smacked down loaded nachos from a plate balanced precariously atop his abundant belly. “Are you enjoying those?” The nightly sports recap drowned out any response. Belching, whistling, picking his teeth. Sometimes she hated him. “I need a change.”

“That guy just finished a reverse marathon. Why don’t you take up retro running?”

“I’ll call Connie tomorrow and schedule a makeover.” She popped a sedative and rolled onto her side.

Gill contemplated using his cigarette to light the bed sheets on fire. Just then the phone rang. “Mrs. Burnquist. How are you? Oh, that’s too bad. No that won’t be necessary. Kitty’ll be around. Thanks for calling. Yes, I’ll let her know. Bye, bye.”

“When we got back from the mountains, my medicine was out of place and some of the mail was opened.”

“You sure you don’t want to come?”

“An entomology colloquium—at least I wouldn’t need my sleeping pills.”

“You could go to the beach and the karaoke clubs. Did you know singing Sinatra can get you killed? They’re calling them the My Way Murders.”

“Call me every day.”

“With the time difference… and the meetings last until all hours.” He checked for her reaction, but Kitty snored softly while in the ensuite bathroom, a faucet inexplicably dripped. The drip, thought Gill was someone else’s problem.

Someone else’s problem indeed. Three days later while Gil winged his way toward Manila and Kitty window-shopped, the sad and neglected Cape Cod moved on.

Believers and non-believers, just because you have never been to Cape Cod doesn’t mean it doesn’t exist, it just means that you’re on the wrong part of the planet—or the wrong planet. – Tyler Malone

Lara Dolphin is a writer and poet. Her work has appeared in print and online in such publications as “Fogged Clarity,” “Orbis,” “The Foliate Oak Literary Journal” and “Calliope.”