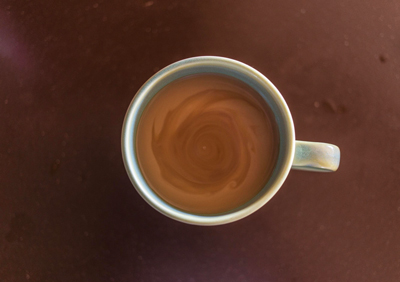 He casually looks around, and his eyes begin to swell with a sort of impatient madness. He begins to fidget, leaning from one leg to the other, grinding his teeth, as an infant howls throughout the confined corridor. He hates himself for having become one with the many who thrive on the caffeinated concoction of original blend with milk and melted sugar. Even more, he hates the strange faces that stand before him in a line that seemingly doesn’t move. He attempts to persuade himself to leave. Missing his morning appointment can cost him his job, but outside awaits the cloud that will follow him throughout the day should he choose to procrastinate his currently desperate situation. If only his morning fix of artificial ambition were offered intravenously, he could avoid the tedium and the subsequent tantrums he relentlessly represses. He is a man of many masks, and hides himself behind a happy face, a charade that proves to be harder with every daily endeavor. Ultimately, he decides to stay, and just like the time his shoelace snapped, or the time that asshole in the left lane cut him off, he quickly teeters toward the edge. This time he takes the fall. He removes a blade from his right pocket, and slashes the throat of the oblivious gentleman whose indecisive demeanor keeps him from the counter. The other patrons cower and retreat with horror, all women and children darting to the nearest exit. Then, after frantically looking around, huffing with rage, he staggers through the door and out to his car. He puts it in drive and pulls out onto West Main, taking deep breaths to try and settle his nerves. He contemplates the consequence he’s bound to suffer, as the clouds accumulate and oppressively hover above, and his head burns for what he loves.

Go ahead, try not to think of these events while you’re standing in line, waiting for the barista to serve the brew what ails you. And if you make it out alive, don’t forget to tip. You never know when you won’t make it out of a coffeeshop alive. – Tyler Malone