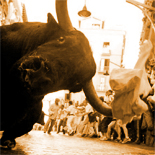 Ice chunks flew at people dashing prematurely into the ring. A worried woman shielded her face as icy, Roman artillery pellets flashed around heads as the crowd chanted, “Sons of bitches. Sons of bitches…”

A New Zealander looked on and said, “A crowd of heroes.”

Entering the ring safely to avoid paying to sit in the stands was taboo.

A man, screaming “Arsehole”, hurled a glass bottle at a smiling runner, as the New Zealander said, “What a hero.”

Bodies filled the alleyway between the barrier and the front row as bodies swarmed over the barrier as the bulls charged across the ring and into the pens as the ring was packed with people in white.

Cows were released into the ring so that the runners could test their dodging skills.

The first cow pursued a man who never had the hope of escape. The man spun in the air, circuitous channels opening in white as the cow charged. The body flew and the New Zealander said, “There’s no room to escape these bulls!”

A man rode on a cow’s foam-padded, blunted horns: weapons unable to gore. People giggled as the New Zealander said, “They’re laughing and someone could get killed.”

The crowd roared as a body somersaulted; the New Zealander winced, as if watching an execution, her friend sat silently, watching the chortling locals dressed in white.

A cow floored a stationary man, leaving him spread-eagled and motionless. Laughter filled the arena as the New Zealander said, “He’s probably dead and they’re laughing.”

The man’s flopping limbs resembled useless appendages as he was carried off to an alleyway.

A foreigner grabbed a cow’s tail. The cow, digging its hooves into the sand, trying to escape as the man hung on as people chant: “Hijo de puta, hijo de puta!”

Someone thumped the tail-grabber, the New Zealander gasped, “Christ!”

The crowd roared with approval at the tail grabbing taboo.

“He thumped him and now they’re hugging,” the New Zealander said. “This is mad.”

She didn’t understand the rules so the punishments for rule-breaking were beyond her.

The third cow was described as: “A real hijo de puta.”

The New Zealander said, “This bull is going to kill someone and that guy over there is having the time of his life.”

Her logic began from false premises.

Afterwards, a young Australian told the New Zealander that running with the bulls isn’t that scary.

I recalled a photograph of an upside-down man, his head almost touching the ground, and a bull’s horns in his upper legs as another bull is about to skewer his stomach. A onlooking man’s mouth in the photograph’s background is ovular, like a sniper victim’s mouth.

I sat in a café as a water truck was shifting rubbish left from the night’s partying. People filled the shade created by umbrellas that sat before the café’s that lined the square.

The New Zealander and her friend, the young Australian, along two others, sat beside me.

“I’m not watching that again,” the New Zealander said.

“Someone could die doing that,” her friend said, “and they’d just die laugh.”

“It was amazing when that guy got clobbered,” the Australian said, “just for tail grabbing.”

The rules governing treatment of animals in Spanish festivals are obscured by chaos.

“When the bulls past me,” the Australian said, “I felt comfortable; they acted like they were on a fun run. They’re interested in running, not attacking. It isn’t that dangerous.”

“Are you running tomorrow?” the Australian was asked.

“Is it worth making the effort to have the same experience?” he asked

“I probably won’t be bothered,” the Australian added, bored. “I’ve seen it all before.”

Violence has rules, it seems, even if from the outside it all looks like a bloodbath. And we love it, too. We love the dopamine, the adrenaline, the rush to the head, but how long do those things last until, well, we become bored? The it’s on to other things: newer violent things. – Tyler Malone