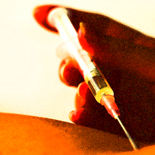 Janie was this girl I knew when I lived on East 29th Street near the FDR Drive. I remember her best the night the ambulance came. We’d spent the afternoon drinking and her skin had had this grayish tint like spoiled milk. Her wiry arms were a network of pinholes, a junkie’s connect-the-dots. The apartment was three monastic rooms in the basement of a brownstone. The little windows were like portholes on the steerage deck of a ship. All you could see were people’s feet hurrying by and in the summer, you could pick up snippets of the yuppies’ and parvenus’ inane conversations.

She smiled and blew me a kiss as they strapped her to the gurney. I wondered if her underwear was clean. My mother had always considered this a cardinal requirement for living in the world. After all, she’d say, you never know when you might end up in the hospital or some other place where you’d have to drop your drawers. Two days later, Janie would become the first dead person I’d ever seen. But in the interim, I focused my mind on her panties. In times of crisis, I’ve found, it’s always best to focus on panties.

Janie had a knack for living dangerously. Some people are good at math; others, sex; still others can juggle or draw perfect cubes. But what Janie was really good at was self-destruction. The first time we fooled around, I got this image stuck in my head of her ashen insides, like an x-ray of a lung cancer patient’s rib cage. I had to pretend I came, though I doubt she believed me. Still, there was something about her I couldn’t resist. She made sin sexy, and I watched like a pervert at a peepshow. She was a master of paradox. She could be both angelic and diabolical at the same time, a snake with wings. She would perch on the edge of the bed like a crow, a rolled-up dollar bill in one hand and a cigarette smoked to the filter in the other. A conical ash hung precariously off the end. Everything about her seemed to be hanging on threads.

But I was only a dilettante in Janie’s society of decadence. I would go with her to score smack in Washington Square Park. I wouldn’t do any but how I loved to watch her shoot it and instantly nod into downy dreams. Her eyes would roll softly back in her head, her body would sink lifelessly as though an anchor had been cut from her foot. Sometimes, she would fall down laughing; other times, she’d be completely inconsolable. In the morning, I’d help her stagger home through the snow and put her to bed. Some days, she would get sick but I didn’t mind. I’d clean up, get her a glass of water or vodka then head to class.

Now I know what you’re thinking: why didn’t you help her or try and stop her? How could you just enable her like that? What you don’t understand is that trying to stop her would have been like trying to save someone who’s drowning in a tsunami and being pushed further and further from shore by the monolithic waves. And anyway, death is like air; you don’t really think about it until you absolutely have to. After all, who thinks about air unless they’re drowning? But once you’re drowning, air is all you think about. And when you’re not drowning, you think about mundane things like laundry or lunch or your grandmother. See, before Janie died, I just thought about mundane stuff too like what kind of shampoo she used and why she suddenly switched to menthol cigarettes and how she used to tell me I was adorable when she was really, really high.

A great man once said that by burning the candle at both ends he gave off a magnificent light. We need those people, especially when we’re young, because this is what humanity is: a beautiful way to die. As soon as you realize that, life seems a little brighter. – Tyler Malone

Phil Lane's poems and stories have been floating in the ether called cyberspace and yellowing on the pages of small journals for over a decade. Mr. Lane fights a daily battle against ennui. On the rare occasions when he wins, he spends the time thinking about Bob Dylan and writing. Mr. Lane lives in Northern New Jersey and teaches English for a private tutoring company.