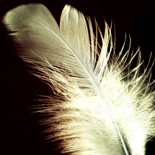 She liked to let the bird out. She liked to let her out and watch it fly free from room to room of the house, from windowsill to windowsill. She liked the flurry of the wings and the mild brush of air that wafted over her when the bird flew by. Nothing should be caged up all its life, she knew; nothing as beautiful and innocent as this bird. It came out of the cage like a baby being born each time, its joy obvious as it flew gracefully around the perimeter of the room. It reminded her of a happy child—and she imagined the child growing through the years as the child she’d always wanted would.

Her husband was not so fond of this habit of hers. What about the two cats, he said—see how the cats watch her fly—they would like to eat her. What if she lands on the floor and the cat is there and pounces—then you’ll be sorry.

That’s not going to happen, she said—plus the cats would just cuddle up and lick her. The cats love her.

Hah! Like I love a good meal. So what’s for dinner tonight?

—the child will grow to an adolescent and will have to learn to hold it’s own against the others—for life is a struggle—it all starts in school, and into college, and into the first job—

And it went on from there. The days quickly passed, with the bird being let out for most of each morning. One day in the spring, she decided it was time to wash the windows as the prelude to the major spring cleaning she did every year. She went from room to room tilting the windows inward and wiping them inside and out and she came to the living room.

—it becomes time to be free of the parents and to make its own way in the world, to live a life, free to choose which direction to go, free to make of itself whatever it will be—

She tilted the window at the back of the dining room down, and as she did this without thought, mildly humming a tune like she did, something came up and shot past her and out the window; it was flapping and cast a breeze over her and—Oh my God no, she said aloud—oh my God no. The bird has gone out the window!

It disappeared into the distance, captured—captured by the great outdoors, another victim of nature and its relentless pull.

She slammed the window as though to keep the bird in, but no; the bird was already gone. Looking out the window, she saw nothing. When her husband came home that night, when she told him what had happened he blew his top.

Goddamn it, Madge. Why the hell did you have the bird out while you were going around opening the windows?

I guess you weren’t thinking, he snapped. Goddamn it. Now I’ve got to go out and see where she is—if I can. Why didn’t you go out to see if she was in the yard and you could get her and bring her back in.

You think too damned much, he said. He stomped across the room and went out the back door, and into the back yard to look up in the trees. The trees were devoid of birds. The dusk was settling down on the yard—he could only think, Goddamn her—I told her something bad would happen. He went in and found her sitting at the kitchen table with her head in her hands, sobbing.

That’s right, he said—cry! You should be crying! Goddamn you—don’t you realize that when fall and winter come, our bird will die from the cold? What have you done, Madge? What on earth have you done?

She raised her head and choked back her sobs.

This is a fine time to realize that you shouldn’t have let her out—we can go tonight and get another bird? Why, God, tell me why it wouldn’t be as easy for me to go out and get a new wife—one with brains!

What, she said, her tears clearing from her eyes—you equate me to a bird?

Oh? Then why did you say—

—speeding speeding up the end is in sight, the wall—

Oh, don’t bother me! I’m going upstairs now to take a shower—I can’t be around you right now. Let me know when dinner is ready. And you can stay here and think about what you did today! Maybe this will give you some sense!

Goddamn you, she murmured under her breath, as he stomped toward the living room stairs leading up.

The same to you, he snapped—and he disappeared.

She went to the window the bird had flown out of and looked out over the back yard—imagining that the bird must be truly joyful now, totally free, with no boundaries, and this made her feel better about what had happened but in an instant, she saw the yard smothered in snow and the thermometer saying twenty below—and she mourned the bird, though it was not yet dead, it was destined to die—might as well be dead. Then it occurred to her that this was true of all of us—

We love what we love, isn’t that right? We want it to fly. We want to admire its majesty, its beauty. But what happens when what we love finds enough strength and comfort to move on—to fly away? No matter what beauty it adds to the world around us, it won’t be appreciated and protected. It will kill us. But you know what? By keeping it locked inside, you kill it. – Tyler Malone