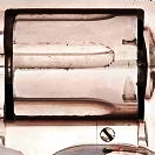 Out in Brooklyn, they wore fedoras, but their mouths sounded different.

‘The problem I have is that he’s fucking lying.’

‘I have a problem with these cocksuckers, too.’

‘Sartre would be turning over in his grave.’

‘Yeah, he hated when a man disguised the social for the personal.’

The big man got up. He had a lead belly. He had been sitting at the bar, nursing an Anisette. Vito had been talking about the horses to Big Frank, the bartender. He was another Frank.

Paulie got on the line.

‘Paulie, I’m thinking more about that piece of work.’

‘That shit you was talkin’ to me about last week, kid?’

‘I don’t like you smokin’ that shit, kid. I’ve got a mind to tell your fadda. Then you be the one wind up as a concrete slab at the bottom of the East River near Hunnet Tenth Street.’

‘You get back to me when you’re serious.’

Then two dial tones were restored.

Little Frankie and Georgie Boy kept smoking that shit. Little Frankie was on his own, in a three room apartment on Avenue J off Utica Avenue. The avenue was filled mainly with gas stations and tire stores. The family was in on some of this action.

‘We ain’t in the life but we got access,’ Georgie Boy said.

‘That is right. Our people launder money through legitimate schemes, but these guys are stoppin’ our tenure.’

‘These bureaucrats are playing games for personal reasons,’ said the other. ‘They’re ruining what is actually ours through books we’ve written.’

Frankie called up Gina, see if she wanted to come over, give some head or something. She said no. They each called up a few other women, but they weren’t that lucky. They considered a dating service, Primary Escort. It was listed in Frankie’s cell phone directory. Then discarded it.

The notions of fedoras were ridiculous that they were wearing in Frankie’s under-furnished living room. They were each the freaks of families. They were smart boys. They met at City University, and now they taught there. They continued talking.

‘We really made it through our brains.’

‘Damned right,’ said Georgie. ‘Although…’ then he took a big drag of his bong…‘although…’

Then they both laughed—‘although, although,’ they echoed… smoke always made words seem funny.

The two were quite facile with words. Words took them off the streets. Words took them from manual labor. They were, though, they were beginning to discover, involved in another kind of vulgar scene all of its own.

‘…although,’ Frankie picked up for him, ‘although there are multiple intelligences…’

‘Ah ha!’ they both burst out laughing.

Georgie’s male family members were all in legitimate construction, plumbing, brick-laying. Frankie’s were all in the life. Father, uncles, bros, cousins. Guys they knew who knew other guys, etcetera. These two felt much smarter than all the men, even given the skills needed to whack someone and those needed for the construction of a cement wall, or laying tile, brick, installing and repairing sinks, cutting up arms and legs and putting them in the basements of chop shops or defunct music lounges. Frank opened up a beer bottle from a Miller six pack, poured a glass for himself. Poured another for George. ‘Thank you.’

They were accomplished philosophers. Black sheep or white sheep of families. Hard to tell. One specialized in Sartre, one in Heidigger. All four thinkers detested dishonesty, particularly of the ruling classes.
Frank spoke, ‘I’ve got more respect for an honest hit man than for a bureaucrat doing dishonest paper work.’

George nodded. They were learning that anything could be done by manipulating paper trails.

‘All we gotta do is tell ‘em they don’t like Italians down at the university and we can get the work done. They may use impersonal machines for their shit up there, but our people take everything personal and respond that way.’

They stopped toking this time, and started speaking really serious. Each was next for department chair if something unexpected were to happen to Dr. Bremer. Then they were silent.

The solution was simply down at the other end of the line. They were friends and it didn’t actually matter who got it.

‘It’s the fucking principle of the thing that really pisses me.’

We leave the folds of our families when we make friends: new families. And friendship is beautiful, isn’t it? There’s one and only one problem with friendship, though. Like philosophy, it’s based on humanity. – Tyler Malone