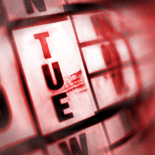 It’s snowing brass under orange lamppost night, shrapnel, the slow motion petals of an exploding Eden. Somewhere out there Mommy’s feet work like pendulums; a kind of guided meditation to see her through the cold and the dark and the poor that, like her, will do anything to take care of their own.

Still, “He’s safe,” she tells her trembling self. “He’s in his crib. He’s c-c-crying and that’s what the pediatrician c-c-called a good sign.”

Squinting behind the icicles forming along her eyelashes as she passes, she pretends not to see them scratching in and out of the shadows in search of everything from a penny to a cigarette to God’s for-better-or-for-worse attention. Hunting and gathering in a technologically advanced yet remedially stratified society as if sentenced at random to live within some have-not’s time paradox.

Because when she gets in she’ll put her tips in the tip jar. She’ll put her costumes in the laundry pile. She’ll say, “I’m here,” as rehearsed. “Want your Pablum? Oh, yes you do, yes, yes.” Then, as the day flips itself sunny side up she calls it, a coin toss, she’ll do whatever it is you’re supposed to for your son. She’ll sing. She’ll coo.

She’ll put you back in the crib and the needle back in her arm.

(the slapping of slippers)

“What the fuck is wrong with you?”

“Well, for starters, her ass feels shaped to the toilet after the kind of defecation you know you’ll be back to finish off later, like a grudge, but she doesn’t say so. It’d be inappropriate and unbecoming to speak so informally to a long-term employer and—“ blah, blah, blah, OK, OK, she gets it. Instead? She looks at the calendar.

She looks at the clock.

“Luce? Shut up. I can’t afford to employ your lopsided tits at my own expense,” says the voice on the line. “I have my clients to consider.”

As its owner palms the receiver to muffle a snicker or something, that voice? It goes snap, crackle and pop the way Mommy imagines it would sound were he to spontaneously combust.

In the meantime, she prepares to say I don’t know where the father of my child is, I’m relapsing and I shouldn’t breastfeed on a methadone prescription. To say do unto others as you would have them do unto you.

But, “I’ll be there in like forty minutes,” she surrenders.

It feels like the Ascension must’ve felt to Christ as Mommy lifts you up toward her breasts. In these perforated arms of hers you’re just a gooey lump, sure, but in her thoughts you’re the sun. You are light and warmth and goodness incarnate; an explosion of blond-haired, blue-eyed virtue sent to Earth to burn the evil away. After all, “We are all of us legend,” she whispers, twirling Daddy’s dog tags overhead. “My boy’s gonna be a soldier when he grows up too hey?”

Mommy has no idea that even you look at her as if through the windshield of a car accident. Then again, at your no-age, you think everything is the circus. You’re either over- or under- whelmed.

At least this is what your dear mother Lucy wants to believe as she wonders if your paralytic affectation has something to do with the two of you living in an empty apartment full of shadows. Because that’s all that it is, right? It’s the overdue bills hamster caging the place like wood chips. It’s reusing tepid bathwater and acting like the stove is a heater.

She looks at the clock.

What happens if the little hand passes the big hand is she’ll be late. Lucy has “ – to get weady,” she says, all goo goo ga ga. “Fff woik.”

As she bends in half to kiss your forehead, exhaling softly over its moisten revenant, you know that this is goodbye. That she’s going to leave you here where you’ll wrestle with yourself until the crib hits the wall, hits the wall, hits the wall! Then superintendent screams, asking if she has to call the police again. You like the police, though. They wear all kinds of funny-looking stuff and say yes ma’am to Mommy like Daddy used to.

Whatever it is that you’re missing, it smells like a man.

At first, after the bank foreclosed the house and Daddy left to seek his fortune in the military, Mommy would set the table for the two of them as if to complement the latest draft of a prayer for his safe return with a visual aid. Now, and please, go ahead, ask her, she can’t tell you what time it is or how to get to the park from here but she can tell you exactly just how many hope-filled and letter-less Tuesdays she’s suffered.

Even now, “Daddy can’t write to us,” Mommy explains, “what with all a’them bumble bee bullets buzzin’ around’n tryin’a like… like make a nest behind his eyes, y’know?”

She sighs. It isn’t cute no matter how it’s phrased.

Then, in a matter of you-don’t-know-how-many seconds you’re crying in the crib again, starving and scared of the perfume she’s misting in one hand and the lint brush she’s tugging at a bunny costume with in the other. Fuzzy. White. “Mommy’s leaving now,” she says over the shivering of windowpanes. “Shh, shh, shh.”

Stream that consciousness! We’re all self aware infants. We like to think that we can see past the moon; but, no, that’s just a pimple at the end of our noses. And that terror of failure and stupidity won’t end anytime soon. When you live off of the perpetual weekend, there’s nothing worse than knowing it’s just Tuesday. Only Tuesday. There’s nothing past the gloom of such a day. – Tyler Malone

Jon Cor is a twenty-something year old living himself to death in Toronto, ON. He intends to publish a short story collection called A Murder of Prose, as well as his first novel, In Heat. When not attending to his priorities as a writer he moonlights as an actor (www.IMDb.com), martial artist/acrobat, aspiring musician and – with great relief – no longer as a Ford model.