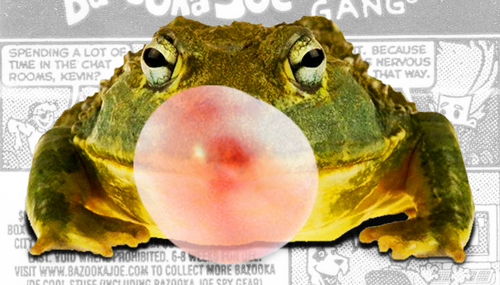 Dandy Wharton and his son had put the boat on the trailer and were heading out of the lake.

He stopped the car, and the two guys saw a raccoon struggling with gum all over it’s head and paws. The frog hopped off into the water.

Peabody had some licorice and a few bags of peanuts and sunflower seeds to toss to them. He called them by name when they went in to the store. He slowly rocked and waited for them to come out on the porch. His sons had rung up the last kid and they were settled all around him.

“Did I ever tell you the story of the bullfrog that got a hold of Jimmy Wharton’s bubblegum?”

They all looked at Jimmy. He looked back with a surprised stare and then narrowed his eyes at Mr. Peabody.

“You didn’t know that a piece of your gum fell out of your pocket?”

Jimmy was a little bit wiggly for a boat, but his dad knew it was worth the squirming to be fishing with his son. Dandy was preparing his pole and his sons with the right size hooks when Jimmy remembered his Bazooka Joe in his pocket.

He reached in and pulled it out of his pocket, unwrapped it, and laid the pink rectangle on the edge of the boat. He wanted to read the comic before he chewed. When his dad said I got your pole, he reached for it and sat back down. When he reached for the side of the boat to help steady him, he knocked that piece of gum into the lake.

“Jimmy, I think we might have put too much sugar in that last batch of syrup.”

He pointed and when Jimmy Wharton turned around, he saw a bullfrog with a bubble gum balloon rising out of the water and heading higher up into the sky. The breeze caught him, and he began to float.

He floated above the lake, above pines, above boulders and up into the sky just outside of Prescott, Arizona.

From his view, he could now see the men and the lake. But they were very tiny and quickly going out of his vision. He kicked his legs sometimes and moved his little frog arms, but the bubblegum was stuck fast. He could breathe out of his nose. A dragonfly came up to inspect, hovered around and checked it from various angles. Then off he went.

He came down in an area that had both pines and cacti. There was no way he could escape with his bubble intact. As he was going in and out of the sparse pines, a family of wild pigs came out of the underbrush. The lead boar stopped and eyed the oncoming frog. He grunted for the family to stay put. Even his course hairs on his back, and certainly his tusks could take care of this pesky pink danger coming at him. But just as he was primed to attack, the breeze blew the frog up and out of the pines. The pigs quickly got back to bush hopping and the frog was soon forgotten.

The impossibility of what he was doing and where he had floated and the fact that the gas burped out by him into his gum bubble was impossible, could be easily explained by where he was now headed. Embry-Riddle Aeronautic School was in session, with the professor teaching the basics of flight and how things to include birds, planes, plants, etc. could float.

“Professor, could a large bullfrog with a balloon in its mouth float?”

“Johnson, if you want to make jokes, how about later when you buy me a beer?”

The students and the professor watched a bullfrog float past their modern looking building. He was twirling in slow circles like a seed might do from a dandelion. He floated past and it began a series of debates and stories that would become what they thought was an urban legend at the school.

There were still times when Whiskey Row could still get quite wild. But generally during the day, only a beer, ballgame and a few old country tunes were going on. At one end of the bars, the first guy saw the frog floating past, and he got excited and pointed and told the next bar. Soon, all the bars patrons were on the sidewalks, along with folks at the park in front of the courthouse. Cars almost hit in the street, and a few folks that were at St. Michael’s Hotel saw it too. Then a good wind caught him and he started out of town, past a Mexican food place and towards that fishing lake again.

It had grown late enough for raccoons to begin to forage the lake and other likely places for food. As the frog drifted towards the lake, a raccoon stood on his hind legs. He was going to pluck him from the sky as he floated past. The frog saw the water and pumped his legs to jump for it. This swung his body towards the water, and the bubblegum towards the raccoon. He got paws and face full of gum that popped, and when it did it finally dislodged from the frog. He landed softly next to the bandit.

The kids sat staring at Jimmy. Peabody kept rocking and smiled at him too.

“Yeah, I remember that!”

Peabody laughed, and one of his sons smiled and walked back into the store.

They got up to leave and were walking home and treated Jimmy like a small hero on the walk home.

Peabody smiled and waved at them as they kicked up some kid dust on the dirt road.

What did Kafka or Gabriel Garcia Marquez do for you? The first time, what did sex do to you? How about the last Superbowl? What about 9/11? Reality, the things that affect us, look differently from all sides. That makes life worth living, doesn’t it? So stay alive and keep your eyes to sky, you never know when you’ll see falling stars or flying frogs. – Tyler Malone

"born burbank, raised hell phoenix, living on an island with the chinese girls in the pacific."

"i have been published all around the place: Pink Litter, Red Fez, Blackheart, Carcinogenic, CHA, and of course i have been swirled!"