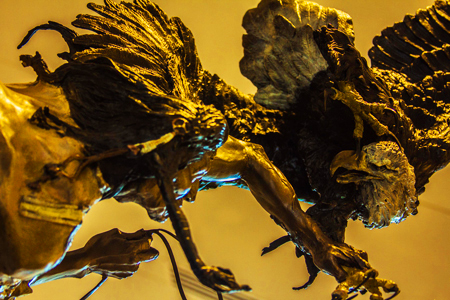 The Cherokee son was wondering where to go next when a thundering surge of water hit him full force. Pushed backwards, he was knocked to his knees. Before he could know what hit him, the waters rushed on him again.

This time, he fell flat out on his back with waters splashing around to over him, ‘as though I am but a pebble in their path.’

Looking into the waters, he saw a hollow log bumping him. Surges of water repeatedly shoved the log into his shoulder. ‘And after the log hits me, it rolls back, as though to gain momentum to hit me again.’

In and out, and back in: the log’s repeated bumps jarred him into flashes of remembering. ‘The mythical Cherokee log, could it be?’

He grabbed hold of the log to feel it pulsating. ‘Oh-oh!’

At that very moment, he knew he was holding the log that contained the sequences and secrets of time. He remembered that he must stop time from escaping. He kicked his feet and struggled to keep afloat while simultaneously looking around for something to plug up the ends. ‘Leaves or seaweed, anything to stop time from spilling.’

As he was grabbing a handful of seaweed, another swirl of water hit him with such force that it knocked the log out from his hands. “Oh, no! Too late,” he bemoaned as he reached for a patch of seaweed.

Jarred loose, the sequences of time rushed out an open end of the log. He saw time flowing out in streams of foam; tiny wakes breaking around them. Off quickly, these sequences of time. They were swimming downstream so rapidly that they broke free from their coverings of foam and were cutting a glassy path in the waters. Flowing against the currents, time was drinking in light to sparkle in the waters.

‘Quickly, so quickly are they off and away, out of my reach.’

He was able to grab but two hours and minutes, ‘Fiery little devils bouncing around inside my closed fist.’

He shoved captured time back into the log. Quickly, he stuffed patches of seaweed inside the open ends. Even as he felt relief, he was sick inside for what had been lost. ‘The reminder of time is now separated from the fixed course of minutes and hours. Time, without course, will be heading into time being everywhere and nowhere at once.’

The waters were beginning to recede into the forest floor when he was hit with another thought. ‘Time will turn up before its time.’

Plunking down in the diminishing waters, he tried thinking it all out. ‘Maybe, just maybe, what has happened to us in the past was meant to be experienced in our futures.’

He was lost in conflicting thoughts. ‘Moments in time will drastically change our lives, but we won’t be able to retrieve even a second.’

Time escaping was time being splashed by the sun; runaway time sparkling like diamonds in the currents. Time without beginning or end, swimming against the tides breaking around him and flirting in spangles of light telling him, ’Goodbye.’ And telling him, too, that neither he nor anyone else would be able to get a hold of time—time inexplicable from now into infinity.

‘Out of reach, these time fragments breaking up to swim off in all directions. They are drifting down the ever-flowing river, taunting me as they sparkle along, winking off and on at me.’

Watching all going, he thought, ‘I, amongst many, will now be a victim to time, helpless to time’s Leviathan confusions.’

While schools of fish swam under his shadows, he further considered: ‘Have we been helpless since time began? Was the beginning of time simply its end?’

He couldn’t remember a time when he had been so confused. ‘Time will be drifting off before we can get a hold of it. Broken and fragmented, time will be out of reach, beyond our understanding.’

The diminished waters lay in dark puddles on the forest floor. He saw them with the reflections of trees in their depths. ‘I captured two elements of time and pushed them back into the log. Now, only hours and minutes will remain the same.’

Another time to begin. ‘Nothing else to do but move on.’

The dizzyingly serious consequences of lost time slowed his steps onwards. The Cherokee son was on a path into a day of untold time that stretched out before him.

New mythologies are hard to come by. This is new, which means it’s old, ancient: no morality, just aesthetic and a new experience. It’s daring! But, still, it’s very traditional, in a man-versus-nature’s-logs-in-order-to-save-the-space-time-continuum kind of way, that’s all. So, balance on that log to save both chaos and order. Hang on! – tm