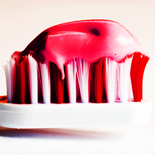 You never invite the women you sleep with into your bed because she’s the one you’ll eventually marry. The couch is for the girls you pick up, and while they aren’t always prostitutes, your luck with women usually mean they are.

You can’t recall her name, but nameless is better. The woman lies on the couch where you’ve both done the dirty and you notice that she’s still wearing her stilettos. You afford yourself a little smile because you know that it’s a sign that she’s a professional.

The smell of your cooking wakes her and she sits upright. There’s a lipstick smear across her mouth and her hair’s messed up. She doesn’t look as good as she did last night, then again they never do. She looks around, taking in her surroundings and she doesn’t seem overly concerned. She’s seen this type of room a thousand times before.

You point at the eggs with your spatula. “Breakfast?”

She shakes her head and begins to pick up her clothes.

She searches for the john, finds it and enters but she doesn’t bother closing the door. You hear every last drop of pee she drains and now you’re not so sure. She comes out a few minutes later with your toothbrush in her mouth. You swallow hard. Life’s not going to get any worse today.

You tell her to flush.

“Why? You don’t like the smell of pee?” She shrugs but does as she’s asked. You hear her spit and catch your breath realizing your mistake to offer her breakfast and you feel some relief that she turned it down.

She walks back into the kitchen. She has long legs, the kind you see in those old Hollywood movies but she’s pure New York. You think her name is Dee-Dee and you look at her with a little contempt as she picks up her things up, she looks over your copy of Fante’s Ask the Dust, which she looks over and tosses back on the couch.

She moves over to the kitchen and lifts a lid off a cold pan.

You replace the lid.

“My grandmother used to give me chicken soup,” she replies. “She was Scottish, or Welsh. That’s all they ever eat there.”

She moves over, opens a cupboard and starts sifting.

“What are you looking for?” you say. She doesn’t answer but pulls out a bag of gummi bears.

“Yours?” She asks and laughs.

You mumble, “For my sister’s kids,” as you feel a flush of embarrassment. She takes a few and puts them back, then walks over to you, puts a damp hand on your shoulder and tells you that you were really good last night. You manage to break out a meaningful smile while hoping above hope that she doesn’t ask you if you remember her name.

She tries to make conversation but realizes that a one way conversation isn’t going to get her any compliments, and she knows her time is up. Time, after all, is money. Before she goes, she checks her purse and makes sure that you paid the ferryman. She seems happy enough.

“Guess I’ll go. Perhaps next time I’ll have some breakfast.”

Laughing to herself, she closes the door and you give up an exasperated sigh. You tell yourself that this is the last time, but you realize that you’re repeating yourself. You’re living Groundhog day, every day.

You’re glad she hadn’t accepted the invitation to stay, because you have to go out soon. After all, you need a new toothbrush.

Man should never be left alone! That order came from on high, but it’s one of those fabricated rules, like one a bully would make to win at a game. No matter how warm the company, or how much promise an interaction holds, sometimes we just need to lock the world out, and stroke those little personal parts of ourselves that the world can’t take away—that we hope the world can’t take away. – Tyler Malone

"I live across the pond in Wales and have been writing for a number of years with credits in about fifty or so publications which include Black Heart and Palehouse. I'm a fan of noir fiction and am always trying out new places to subscribe to. A member of Scrawl, Critters-bar and zoe websites."