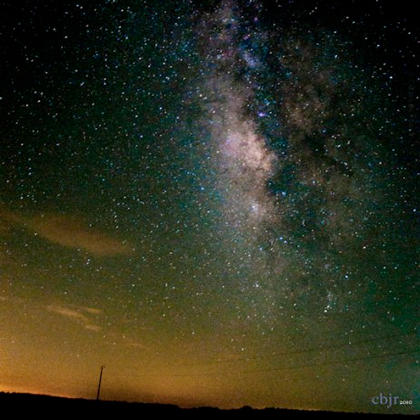 If ten years of staring up through the atmosphere had taught Quince Skine anything, it was that a truly cloudless sky was a miracle.

His nights were all the same; they began with him shoving a ragged and reddened eye into the end of a long, rectangular device. He scanned the cosmos with reckless abandon, dreading the eventual moment when the first steak of gold crept over him. Not that he was complaining, of course. Without the surprisingly generous grant he had received from the government, the stars would have forever remained smiling twinkles in the night to him. The construction of his observatory had been a long-contested matter, rebounding off layers of permits and red tape for more than two years. He would have been more precise, but getting lost in the sheer volumes of blackness every night had played havoc with his sense of time.

Then again, time didn’t matter when you had space.

Even though Quince would do anything for his job, it wasn’t easy. The observatory stretched so far into the atmosphere that breathing was a battle in itself. He had lost count of the number of nights he had spent lying on the shiny floor, too tired to do anything more than take useless gulps of air. Of course, he hadn’t told anybody this; he had more important things to worry about than a little fatigue. Hungry eyes were still fixated on his observatory, ready to snap it up for their greedy mouths.

Then there was his superior, the master of sarcasm. The astronomer doubted that a day had passed by without a sneering reminder that highlighted how unimportant Quince was compared to him. These didn’t hurt; indeed, he was so high up that he felt like nothing hurt these days. The only emotions he felt anymore were the occasional painful twinge of memories: promises he’d made and forgotten.

At first it’d been little things—a night out, maybe two. Then it’d been dates. Inconsequential, of course. More children, an anniversary or two. Nothing stuck in his mind anymore. There were a few people, and a few names he could barely remember now. His mate. His offspring. Only dregs of yourself, destined to steal your legacy. No, things were better this way. It was only him and the observatory now; everyone else seemed to have forgotten him, although this may have partially been because he’d ensured that all messages that managed to find him were sent backwards, on a collision course with the sender. Something else was more important now.

In his second week at the observatory, he’d spotted something big—something so huge it eclipsed everything else he’d seen so far. There was a planet in one of the neighboring galaxies. Small and trivial, it was cursed to twist around a moody star until the planet was swallowed up. It was gifted with a myriad of life forms—perhaps too many for its own good. Whenever Quince saw it, a new storm had burst onto the surface of the planet, and another segment of the planet’s population had presumably been annihilated. His body had begun to quiver, several of his scales cascading off him in a metallic heap on the floor.

It wasn’t just that the planet was dying; it was that its own inhabitants were killing it. Unknowingly or knowingly, their actions were destroying its biosis. The irony nearly brought a tear to his eye. Eventually, whenever he entered the filthily clean building, he heard the planet’s call. It was a wail that carried through stars and asteroids to reach him; a wail that only he could hear.

And he would heed it; he just needed more time.

Quince reached out with a quivering tentacle, ensuring he faced the darkest sections of space.

He watched helplessly as the planet disappeared behind an unwelcoming blaze of light, wishing he could physically pull it back into view. Quince felt sulfur bloom in his eyes. These people, whoever they were, what had they been thinking?

The potential was there. Their—what did they call it?—their Earth could have gone so far.

And so the astronomer sat, looking up, waiting for the clouds’ poisonous tendrils to pass over him. Celestial gaze was a curse.

Martin Rees said the universe exists only because we are aware of it. But are we? Everyday, every life we come into contact with, do we care about trying to save it? Make it better? We live for frantic selfishness of today, never the quiet of tomorrow. Martin Rees also said that whatever looks up into the grey sky to see the Sun burn out in a few million years won’t be human, but what about what looks down to see us destroy ourselves long before that happens? – Tyler Malone

Anant Hariharan is a high school student who has lived in different countries in his growing years. His recent years have been marked by both the sound of power chords and an assortment of short stories and poems. His prose has been published in journals and magazines including Linguistic Erosion and Teen Ink.