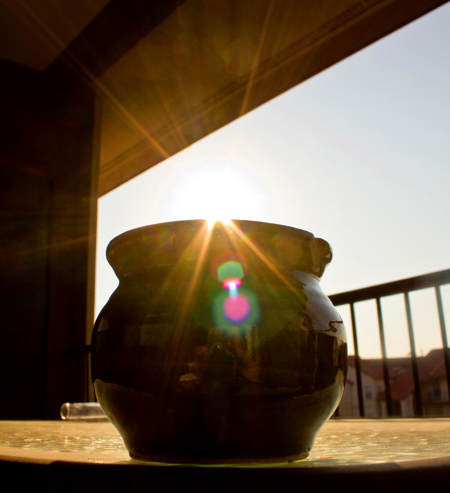 2: Go to the kitchen. You’ve always hated the color of the walls—stark white, blank white, there-is-no-hope-snowstorm-white. She always used to say that the white wasn’t blank, but full of invisible possibilities, could-happens and maybes that only became clear later. These days it reminds you of hospital rooms. You remember those all too clearly these days.

3: Put the kettle on. She bought you the kettle for your birthday a couple years ago. It was painted fancifully, splattered with colors, like Pollack. Now it seems grotesque, like it’s laughing at you. Reminding you of her love of simplicity, because she claimed there is no such thing.

4: Take a mug. Avoid her favorite ones. It brings up too many memories, and you don’t want to have another breakdown.

5: The filters are not the right size. They are never the right size. You used to cut the edges off and put them in collages. She would watch in amusement. You artists, she’d say, mock judgmental, mock haughty. Always taking things apart or making them. Is it hard, being you? You’d laugh. These days you just cram the filter into the thing that holds the filter. It doesn’t fit, but close enough.

6: One has got to get the right amount of coffee. You don’t, not anymore. You just put a couple scoops in, not noticing whether there’s too much or too little. There are more important things to deal with in life.

7: The kettle starts to whistle at you. You pour the boiling water into the filter, and watch the instant turn into a murky puddle of water, grains floating around. After the water’s drained, you pour another cup full in. Sometimes it overflows. Sometimes it doesn’t. It requires timing.

Note: There is always margin for error. For example, today you accidentally pour the boiling water all over your hand. You hiss a little in recognition, but it doesn’t really hurt that much. You drop the kettle and move to the faucet, sticking your hand over cold water. She’d told you that was the best thing to do. Even when you complained that the cold water hurt more than the burning would, she’d insisted. You keep it under now, not because you want to, but because sometimes you fancy that instead of lying underneath the gravestone a block away, she’s standing over your shoulder, scolding you for whining about the cold water, and how much it stings.

This is the end, oh, this is the end, every single day. Thank the goofy gods we have stories like these to help us through the times as dark as unground beans. Men, even if you have it good, remember: there is always margin for error. – Tyler Malone

Kate Cipolla has never been published before. She sits among stacks of her writing and thinks to herself that she should eventually publish some of it, but that means moving, and isn't she a writer so she doesn't have to get up? She enjoys grooving to rock music, saying words like "grooving", and is amused by writing about herself in the third person. Someday she'll try and figure out if this third person is actually a split personality named Janet, but currently she's comfortable living with the possibility. Even if Janet never pays the rent on time.