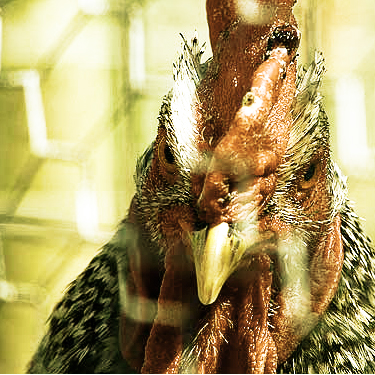 I loved my cock. El Pollo Diablo. He was a quiet cock most of the time. None of the hens could make him screech. Proud and strong, he’d swagger ’round that barnyard, and if any of the gals got in his way, he’d peck ’em to death. With or without his silver spurs, that ol’ blood lust would kick in and he’d be ready to kick ass.

People say chickens are stupid, it ain’t true. Diablo knew we were a team—the best there ever was. For all of 1935, anyway. We’d head out from Calexico ’bout 9 o’clock and pull into Algodones ’round ten thirty. I’d drive my Chevy pick-up up to Los Tigres Del Sur’s back door and haul my crate inside and down the stairs where hombres from every cattle ranch and hay farm, from Mexicali to Nogales, brought their fighters every Saturday night. Already the bullshit and tequila would have sent the bets soaring over whether El Gringo’s cock would kill off another half dozen of Mexico’s finest.

By eleven, we’d be on our way home, loaded and a few pesos richer, and I’d stop just this side of the border and patch up ol’ Diablo‘s wounds. There weren’t many, I guarantee ‘ya. Except this one time I had to sew half his comb back to his head. He was so exhausted and weak from blood loss, he didn’t even fight me.

Leena-lou—that’s what I called my third wife—didn’t like that I picked up a few extra dollars that way, but I’d tell her, " Leena-lou, everybody in this family’s gotta work."

"Don’t start in on Sam," she’d say. "He can’t work, what with his asthma and all this desert dust. You just leave ‘im be."

I didn’t know I’d be marryin’ me a shiftless no-account nose-in-a-book worm boy too when I proposed to Leena-lou, you understand. "My boy’s twenty-two and out on his own," she told me. Yeah, on his own until she made me fall in love with her curly brown hair and blue eyes as it turned out. He moved in when the land he was workin’ in Oklahoma fried up and blew away. Not his fault, Leena-lou said, give him a job. So I did. And he clerked in my hardware store okay till one day he was sweepin’ up and started wheezin’ and sayin’ he couldn’t breathe for the dry heat. From then on, Leena-lou made one excuse after another for him.

Don’t know what there is about a mother’s love, but it sure seems to last a lot longer than a wife’s affection.

"You allergic to chicken feathers?" I asked Sam one Saturday afternoon.

"Well, s’ppose you help me take my cocks to Algodones. You can load and unload the crates." That suggestion didn’t set too well with him.

"We could get caught. Arrested," he said.

"We might get stopped, but we’d say we was haulin’ chickens to the slaughter house like a lot of folks do around here to make extra money."

"What’sa matter, boy, you scared or just don’t like the sight of blood?"

Sam didn’t say nothin’ to me. He walked away. I think he poisoned Diablo or hexed him.

Anyway, that night Enrique Herrera brought in this big, brown cock—damn thing must have weighed twenty-five pounds if he was an ounce—and he bloodied Diablo in less than fifteen seconds. Went right for his eyes, and his spur cut clean through Diablo‘s neck. Must have severed the artery because blood shot out in short bursts, like bullets from a machine gun. When he lay still, I picked Diablo up by his feet and wrapped him in newspaper. I still remember the headline: War Breaks Out in Spain.

I’d lost my share of cocks in the ring, but losin’ Diablo was tough. What I’d come to believe was a legend had been born, died, and replaced with only me to grieve for him, dead before his time.

"This is your fault, Rocky" Leena-lou said as we drove into San Diego’s Lindberg Field Airport. She’d stopped cryin’ and settled into a limbo as grey as the smoke risin’ off the burnin’ hay fields after balin’; barely spoke to me for the three days since we got the news that Sam’s body was bein’ delivered compliments of the Falange. She didn’t mean it. I didn’t know Franco or what his beef was with the Spanish government. Fascism was just a word men said in the barber shop before they spit.

"Drive ’round to the cargo area," a uniformed man said. He smiled at us. "Have a good day." He didn’t know what we were there for, an old farmin’ couple pickin’ up a new plow or a load of seed maybe. I wondered how we were gonna get the coffin off’in the plane and into the truck bed. But there wasn’t a coffin. Just a small wooden crate, and inside an urn and a letter.

"That’s it? That’s all I have left of my son?" Leena-lou said to Father Luttrell. He’d come ’round the house to pay his respects, but like most folks, Leena-lou wanted answers not sympathy.

"When injuries are severe," Father Luttrell said," sometimes they decide to cremate the remains."

I knew what he meant. The ashes in the urn probably weren’t even human.

"What am I supposed to do with ashes? Use them to fertilize the roses?"

Burying the urn was expensive, but I figured a real funeral would make her feel better.

"What’s it say, Rocky?" Leena-lou said. She’d been tryin’ to decipher the letter since she opened it. We were sittin’ on the porch, on a sad summer Saturday evenin’. Hell, I couldn’t read much Spanish, but the letter was stamped with an official lookin’ seal and the words ‘muchas gracias’ were printed above the signature.

"He died a hero, and we greatly appreciate it," I said.

Man’s inhumanity to farmyard animals is something almost any despot would find inspirational. Take note, men, before more careful with your cocks; don’t take any risks, and don’t believe in your cock and nothing else. It’s not immortal, and it’ll go against a bigger one sooner or later. – Tyler Malone