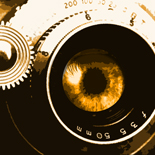 “God,” my grandmother once told me, “what an ugly thing you are!”

Before the black-and-white television, (speech forbidden), she jerked, the expression left her eyes…

A stray cat, once owned by previous tenants in our block of council flats, its upkeep shared by the remaining occupants, was in the room observing the urinating woman’s tormented memories spiraling into the abyss, cat and adolescent perplexed by the growing wet patch on the woman’s lower-abdomen region, her gasp-whispers like a suffering bird’s, this undignified departure from life’s stresses symbolic of the shambolic existence that had preceded it, cat and adolescent colliding, the room seemingly possessed, Puss smacking a table leg in terror.

Downstairs, gripping the public phone, I pleaded: “Get here fast.”

A whip-carrying woman on a card was saying: “No pain, no gain,” my voice shaking like my hands.

I was put into a barracks-like children’s home, plaster hanging like dying hope from its walls, the ceilings high, rowing-boat-width bunks like coffins in a penitentiary for the dispossessed, the lads claiming I needed “a good thumping.”

By midnight, I was in hospital, my ribcage like a tin rubbish bin caught in a hurricane. I’d done my best to protect “my beautiful face,” (my grandmother would’ve been delighted), waking, not recognising the room, a nurse stroking my head, her blue-eyed charity surprising, fronds curling around her reddened cheeks; the strange experiences of pity: a woman touching my forehead affectionately!

The next institution’s sandpit was a desert of hollowed eyes.

A flash ignited my mind! I looked like this when I was their age!

I pleaded that someone get me a camera, diffused aspiration taking clear shape, a force outweighing the belief that it’s rude to ask for anything.

I caught expressions that should never appear on any child’s face, this offering comfort. Wandering in bars, waiting for day’s return, I would re-live the longest hours, believing motherless children are beyond redemption, that forces undermine the attainment of requited love.

Photographs accumulated, a work colleague in the government department I ended up in asking me, on hearing about my photography: “You don’t think you’re going to do anything constructive, do you?”

I photographed people going to football matches. I avoided the word supporters because of its connotations.

One day Chelsea “supporters” harassed me.

I had been focussing on horseshit, its colour perfect for measuring reflected light, “a person in a Chelsea shirt,” whose knowledge of exposure appeared limited, remarking: “Great foetoe, mate, ha-ha-hah.”

I was surrounded, the constabulary more aggressive than those “stadium-bound gentlemen in blue shirts.”

My darkroom manager said that someone had an “interest” in my “football pictures.” He showed delicacy by avoiding the word supporters. I assumed I had broken copyright law, a football club wanting to warn me of the illegality of selling photographs, without permission, taken inside grounds.

The darkroom manager insisted I ring Alastair Seymour. The name wasn’t a pun.

Seymour, a towering figure in photography, said: “I’m so glad you’ve rung. Can I see your portfolio, please?”

“Because I can sell your pictures.”

He laughed when he said this.

His receptionist smiled mysteriously. Maybe Seymour had mistaken me for someone else?

Seymour appeared. I wanted to apologise for wasting his time. He had grey, curly hair, a rotund face, and kind, brown eyes that glowed with a wonder that obliterated shame.

He went through my portfolio, whispering: “Marvellous.”

“Such talent. Is there anything that you want to do in photography?”

“You want to get yourself killed already?”

A week later, I was there.

Before leaving, I was invited to a party, Alastair’s cajoling overcoming my reluctance. I discovered important people could be friendly and understanding. I also experienced another revelation. Renata La Fontaine monopolised my attention, the first time a beautiful woman was prepared to risk dignity in pursuit of holding a conversation with me. If the stream of words ran dry, she would sweep the river of our interaction with another wave of speech, attention from someone like her more precious than anything I had ever experienced, dream-like, beyond previous possibility.

We were in Paris when Reportage hailed me “as the greatest talent since Cartier-Bresson.” I imparted “delicacy into harrowing images….His affinity with his subjects leaves our memories incapable of relinquishing his work; his pictures, having already passed into visual folklore, have made him the new master of the decisive moment.”

A year before, I had been irrelevant; now I was “the new master of the decisive moment.”

I ran into the guy who’d intimated that I was never going to do anything constructive, his eyes flashing like lighthouses.

He insisted I join him in the café where he was seated. I asked him why he wanted to speak to me. He feigned bemusement.

“Give me your email address,” I said. “I want to send you something.”

The pictures of disturbed Libyan kids I sent him caused the following response: “Wow!”

A decisive moment for him as well.

Photographers will shoot a person and frame them, just like the worst criminals in the underworld. But they need to—they need to look at anyone else other than themselves as they hold a camera lens like a machine gun barrel, and point it right at a human face, screaming in the sincerity of suffering. – Tyler Malone