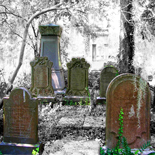 That morning, I felt as miserable as a vampire with a toothache. Sure, no one forced me to watch an Evil Dead triple-header until four a.m., but equally the world had to be a fault for making me get out of bed, let alone go to work. I crawled into yesterday’s shirt and trousers, ate toast and stared vacantly at the grouting between the kitchen floor tiles. On my way out, I glanced in the mirror and shuddered. I looked like an extra from Day of the Undead Office Drone.

Late, I cut through the cemetery to get to the subway. It was already autumn, the air damp, the sky like old dishwater, and as I hurried between the graves I got a bit spooked out, imagining mouldy hands sprouting from the muddy ground and half-eaten vicars lurching from the rectory doors. I always liked to think, if I were ever to encounter such horror movie tropes, that I’d react calmly, as if I’d known it was only ever a matter of time before I took arms against the demon hoards of hell. However that theory was squelched like a little boy’s brain beneath a zombie Nazi’s jackboot when a melancholy voice went, “Hey… Mister.”

I squealed like a teenage fangirl and jumped two foot in the air.

The voice came again from behind a slouching gravestone greened with moss. “Hey… hey… over here.”

Chatting to weirdoes loitering in graveyards did not fit in with my usual schedule of racing breathless into work, grabbing a coffee-like substance from the machine, and logging on seven minutes past nine, but maybe because of my late night Evil Dead-athon, or maybe because I just had an intuition that something odd was happening – his voice sounded so unlike your typical drunk – I found myself edging over and peering around the gravestone.

What I saw made me gag.

It was a corpse, as in a real corpse – the decomposing body of a dead man – half-climbed out of the soil.

The top of his head had sloughed to the side, and his straggly black hair covered one shoulder of his dirty suit. Beneath that – inside his rotted-out skull! – maggots writhed around a puttyish mush that I vaguely registered as his brain. When he looked at me and smiled, mouth open, a long slug slimed over his lip and started down his chin. It took the clenching of every muscle in my face and chest to not spray him with half-digested toast.

I knew at this point I should have sped to the nearest airport, booked a flight to the farthest country, and hid in a cave until the zombie apocalypse was over. At the very least I shouldn’t have helped this particular zombie, who no doubt, upon being helped, would feast on my brain. But the reality of the situation – his feeble attempts to wriggle out of the hole, the white worm curling questioningly from his eye as he said please, the very fact he was so polite! – implied anything but danger.

Grimacing, I reached down, and he took my hand. It felt like a raw chicken carcass. He asked me to pull, gently. The dirt fell away as he shimmied out of the hole.

Then he was standing beside me, brushing down his suit. As he lifted his hand, I flinched, thinking he was making a play for my brain, but he was just holding it out for me to shake.

So, we shook hands.

“Thank you,” he said, and hobbled away.

I thought about going after him, but my feet wouldn’t move. I thought about screaming, but by the time I was able the feeling had passed. Some time later, I carried on walking, got onto the subway, and went to work. When I arrived at my desk, I apologised for being late and said something about delays – someone else commented about how the train were getting worse, and everyone nodded. Then I stared at my monitor for eight hours and tried not to think.

Later on, after I got home, after I showered and ate some dinner, I went to my DVD collection. Usually I’d look for something good to pass the time, but the zombies and vampires, the demons and psychos, the mad scientists and giant monsters, they washed over me.

None of it felt real anymore.

What will the dead think of us? While moaning, when they see our droning, will they crawl back to their cool, wormy world, scared of what we call work? What they once called living? When the much-hyped zombie apocalypse does arrive, just drink three cups of Coffea arabica, shave your skin, and go to work. That’ll keep the excitement under the ground. – Tyler Malone

Rupan is a short writer of tall stories. He has been recently published in Eclectica, decomP, and Bound Off. Say hello at rupanmalakin.com.