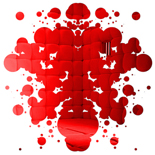 I can no longer look at them. They make me sick: the kind of nausea that a sheltered catholic school girl gets on her first night at the university. They’re very white and very dreadfully boring, but there’s nothing else to do. At least I can say that they’re strong enough to barricade all of the hideous things from which they currently protect me. But I’m not safe. I’ll never be safe, and I’m in dire need of some sleep. If only I could maintain an hour or two then perhaps I’d be somewhat strong enough to keep my mind from soaring. It’s like a bird in the early autumn breeze only it perches on the barrel of the pistol from which it beckons me to bury it point blank between the brows of my eyes, and paint those very white and dreadfully boring walls with the back of my head. My limbs fire ferociously in every which direction and I begin to think that it’s only a matter of time before white-suited strangers bust in and haul me out of here securely strapped in a straitjacket. They’ll commit me to a room where they’ll attempt to rectify reality from my currently violent and delusional state. But if you think about it, the chances of that happening are as slim as an intergalactic race of cosmic citizens descending from the dark sky and saving me. Could you imagine a body surrendering to the radiant beam of light that ascends it into their saucer? I can. I can imagine elevating up and out of this dreadful hell hole. Then I’ll watch it burst into flames. I’ll feel relieved having escaped another one of the world’s ordinary agonies, but perhaps it wouldn’t be all milk and cookies. At the speed of light, I’ll enter a different dimension scratching the stitches that itch my asshole which was forcefully ravaged from their intellectual probing. My head will lower as if to grieve over the open grave in which I seemingly always find my luck.