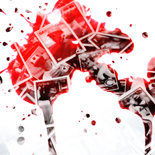 Most people thought our house was haunted because my brother killed himself in the attic. The police said it wasn’t really a suicide. It wasn’t neglect either. No one would’ve thought Grandpa’s old war guns could’ve been loaded. I guess I shouldn’t have told him what was up there. But no one would’ve guessed they still worked.

I haven’t been to the attic since the police left. I’ve always wondered if they cleaned everything off the walls and what they did with Grandpa’s guns.

Most people say something evil must’ve caused it. Little boys just don’t go and shoot themselves in the head. I was only thirteen, but I was smart enough to know people didn’t hold guns like that accidentally. The pure force needed to pull a trigger on that rusty antique required much more than the clumsy hand of a scrawny child.

Dad always told me there were no such things as ghosts, so I knew nothing supernatural could cause Conrad to pull the trigger. I know it wasn’t Mom and Dad’s fault for getting a divorce either. I’ll never forget the echo of the blast. I thought the roof was collapsing on us, like maybe a plane had crashed right through it. I still hear the sound bouncing off the walls, a little quieter each day.

Sometimes I like to play detective and try to gather clues. When Mom’s at work and I’m home by myself, I’ll take a magnifying glass out from my sock drawer and go into Conrad’s room and look around. After rubbing my finger through the dust and jotting down a few notes on a little yellow pad, I’ll march over to the attic door. I’ll pull it open and look up the dark stairs, and then I’ll close it quickly. But not before the smell of gun powder wafts down to sting my nostrils. I’ll rip the paper from the pad, tear it into tiny pieces, toss it in the bathroom garbage can, and go see what cartoons are on the TV. I’ve done it at least a dozen times. I don’t even think about it anymore; it’s just automatic. I don’t know what I write, but I’m sure it’s the same each time. There aren’t any clues anywhere in the house. It’s just one of those things that happened that they’ll never figure out. I’m pretty sure I even tear the paper the same way each time. Probably into seven little bitty pieces.

The people that didn’t think the house was haunted before think it’s haunted now. Maybe that’s why I won’t go into the attic. Maybe I’m afraid my little seven-year-olds brother is running around in his Osh Kosh overalls, one strap hanging haphazardly off his pale shoulder, his head not quite whole. The scent of gun powder sometimes seeps through the vents and chokes the whole house. It keeps me up at night and makes my food taste like ash.

Every night before I go to bed, I look in Conrad’s old room. I think about the time I stole his baseball cards and how nothing was ever the same again after that.

This is the power of flash fiction. You begin reading, and before you know it, you’re scared, you’re sick to your stomach, you’re unnerved. Your world was safer 500 words or just a handful of seconds ago, wasn’t it? This story shows that safety is just a child with a loaded gun. – tm

Nathaniel Tower writes fiction, teaches English, and manages the online lit magazine Bartleby Snopes. His short fiction has appeared in over 100 online and print magazines and has been nominated for the Pushcart Prize. His story "The Oaten Hands" was named one of 190 notable stories by storySouth's Million Writers Award in 2009. His first novel, A Reason To Kill, was released in July 2011 through MuseItUp Publishing. His first novella, Hallways and Handguns, was just released and is available here. Visit him at Bartleby Snopes.