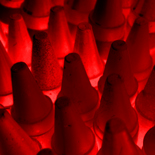 The children’s screams were completely deafening and were centered within the plastic ball pit of Buck N. Ear’s Pizza Joy Palace. Every single tot ran to the sanctuaries of skirts and mom jeans, their heads being massaged by manicured hands. Cory was the assistant manager on duty for the night, perplexed but determined to define the cause of this strange disturbance. He clumsily tumbled through the open net and dived into the sea of multi colored balls. Cory instantly felt a human body at the pit’s abyss. The Joy Palace was immediately closed and a brigade of authorities in various uniforms descended upon the pit in question. The actor playing Buck N. Ear removed his mask and drank lukewarm beer from a stein that was left behind by one of the parents, backwashed remnants of pizza crust floating at the top and playfully nudging at the actor’s lips, wanting to be swallowed.

“We have a body of a male Caucasian, age around mid-thirties…” the no-nonsense Sgt. Delacorte reported in his voice box. “He’s dressed in a suit and I don’t know much about this kind of stuff but I think he’s already been embalmed.”

The body was confirmed to be that of Eugene Magoon, Jr., a local resident who had succumbed to testicular cancer at the tender age of 33. The funeral home had reported his body missing that morning. They were alerted and a hearse was on its way for Mr. Magoon’s return to their care.

“How on earth could this happen?” Cory asked the officers as they interviewed him.

And then it dawned on him. Rodney the night janitor. Rodney was a bit of a loose canon. A cousin of his had just died the week before and Rodney bragged to Cory about how they were going to send the cousin off “in style” as per an elaborate will he had penned in crayon on his deathbed.

Rodney reported to the station for questioning.

“I’m sorry for you loss,” Sgt. Delacorte said, “but it appears that someone stole Eugene’s body from the funeral home and left him at your employer’s. Do you have anything to share with us about that, Rodney?”

“Well, Gene was a fun guy,” Rodney began. “He wanted his funeral to be fun, right? One of the things he wanted most in the world was one last night at Buck N. Ear’s.”

“You do realize that it is illegal to remove a body from a funeral parlor?”

“Um, yes. But we had to do it for Gene. He was a big kid really, went to Buck’s every weekend. After the store closed we brought him in for a post-mortem pizza party and helped him play all the arcade games. I know I helped him, but he’s a meaner throw at ski ball than he was in life. We all got drunk and forgot to get him back to the mortuary.”

“I’m placing you under arrest for theft… of a corpse.“

Rodney was carted off to the broom closet cell at the station to await transfer to the county jail.

“It was worth it!” Rodney screamed from his cement bed slab.

“I can’t tell you how grateful we are that you found our Eugene,” Mrs. Magoon told Sgt. Delacorte and Wesley Ruggles, the director of operations at Gate of Heaven Mortuary.

The chapel service was solemn and quiet; a preacher who hardly knew Eugene recited a few psalms and the pallbearers transported Eugene’s coffin to a hearse that was being driven by his Uncle Stanley, who was masquerading as funeral staff. Seated beside him was his son and Eugene’s cousin, Neil, himself dressed as a priest. The six car procession headed for the cemetery until the hearse and another car containing a gaggle of yet more cousins broke free of the line and sped down the avenue toward Eugene’s old house where an inflatable bouncing castle was set in place. The cars screeched to a halt and the six man group pulled the coffin free of the hearse. They carefully extracted their beloved playmate and headed for the castle.

“Okay, Gene, here’s to you, buddy!” Stanley yelled merrily as they heaved the flopping sack of flesh and embalming fluid inside the castle where many others were waiting in their socks. Eugene bounced off of the bottom of an interior wall and fell to the wavy plastic floor, motionless. His friends jumped up and down as hard as they could and Eugene’s body sailed into the air, a little further toward the ceiling of the castle each time, his eyes popping open violently and his tongue slithering out in a dead idiot’s delight with each forceful bounce.

Eugene’s mother subsequently had him cremated, but that didn’t stop everyone else from wanting to continue with the festivities. A sandcastle was made using Eugene’s ashes on a nearby beach until a large wave came and demolished it, dragging what was left of Eugene into the ocean.

“God, what a bunch of jackasses,” Sgt. Delacorte said to his partner as they surveyed the sandcastle scene, preparing to make a string of arrests.

Poets? How would you like your deaths to manifest? Since the greatest poetry is written with a nod to non-existence and Death with a capital D, here is one writer’s suggestion regarding questions so few of us ask… – gh

Kevin Ridgeway is a writer from Southern California, where he currently resides in a shady bungalow with his girlfriend and their one-eyed cat. His poetry and stories have appeared in a wide variety of publications online and in print, including Underground Voices, Hobo Camp Review, Thunderclap! Magazine, Electric Windmill and Ray's Road Review.