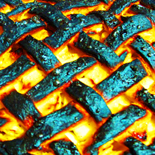 She had imagined once that love was soft and squishy like carrot cake or banana bread. With Claude, it was at first, if not a little moister than she wanted. But as the initial passion wore off, she found it to be a little more light and flaky– croissants, cherry pinwheels; she found the portions bigger but less filling.

Three years of her life had been given to Claude, and she could no longer pretend that she even liked him. They had grown distant, torn by the pressures of life, and unable or unwilling to do the kneading needed to keep their affection growing.

Evelyn was considering leaving him. The relationship had become crunchy and dense like the crust of the pie she was baking. It was going to be a surprise for Claude when he got home. Yet, even though she wanted to show him how much she loved him, she couldn’t help feeling that they, as a couple, were already dead. The pie would not take away the hurtful things that had been built between them, layers of bitterness caked together into shells hard as bricks.

Evelyn watched the pie in the oven. It browned into a beautiful gold. It was the finest pie she had ever made. She waited, the shell grew darker. It cracked, and the peak began to burn. The pressure inside built, and the pie grew, mountainous, monstrous. When the crust was completely deformed and black, Evelyn removed it from the oven. Crying, she left.

Glad we here in the swirling madness were not treated to the odor of burning flesh in that many men often feel like hamburger after a breakup, even if the skirt steak was sublime, and while relationships are often less than chardonay, in this case we’re left with the char. Cheers. – gh

Erik Knutsen was a good friend to himself, until he had a falling out. Now he spends his time trying to recover from the heartbreak of having been rejected by one so dear and near.

Erik on the web: His blog is
I Am Who Everyone Else Is Not