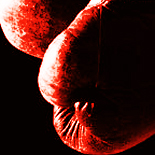 Already the second Friday of school, seniors had yet to punish a single freshman boy for his classification, so that night, girls still filling out would be baited by bottles of Boones Farm, and freshmen boys, testicles freshly dropped, could only enjoy beer if they consented to a match in Josh’s hand-built, backyard boxing ring.

Though Josh had never beaten anyone up, he had spent all summer constructing the ring, and this would cleanse him of what he assumed was shameful blemish of non-violence. For his efforts, Josh figured, surely a freshman would be sacrificed to him. Knowing and hoping who it could be, Josh asked his friend Bowman’s permission if his younger brother, Burr, could fight.

“It’s up to Burr,” Bowman said apathetically. “But his karate instructor tells him not to fight—defense only.”

“He isn’t the Karate Kid. He’s a faggosexual, just like his big brother.”

“Burr’s been training hard: no TV, getting up early, he’s a beast. And he’s fast. I haven’t enjoyed seconds at dinner in weeks, Burr beats me to it. The kid is just too fast.”

“Your fat ass is too slow for good food,” Josh said as he poked Bowman’s belly—which curved under a “Taco Smile Taco Stand” tee-shirt.

Rolling his head, neck fat collecting under his chin, Bowman said, “If he signs your contract, that’s his own deal. I don’t care.”

Josh found Burr at lunch. “Here, sign this waiver to fight tonight at my place.”

Burr looked over the laser jet paper. The document used flaccid legal language: By signing, you agree that Josh will not be held responsible for any injuries inflicted during fight club. If you bleed, it’s your own business.

Burr asked if Josh’s lawyer looked it over.

“Lawyers are the ass hairs of humanity.”

Josh knew Burr’s dad was a local lawyer, a free speech attorney. Josh believed he didn’t need an attorney for his speech. No, in his mind he was free to say what he pleased.

“Is this really a fight club—or do you just like the sound of it?” asked Burr. “You have a stick figure cartoon boxer on the paper.”

“Just letting you know what you’re getting into. It’s just a box ring, so no kicks, Bruce Lee.” Josh gave a coughing laugh as he hacked up a chunk of cafeteria chicken sandwich. “All your friends are going.”

“I know, but I have a competition tomorrow morning.”

“Not my problem. But I’m sure you brother doesn’t want a fag little brother. You’re a fruit if you miss out on this.”

That night, three kegs sat in the yard like stumpy gods in trash cans lined with gas station ice; the emptied ice bags, still dewy and chilly, wrapped around trees and stuck to dried cow patties. Sleeves of red cups stood like candles at a Shinto shrine. Wordless music pulsed out of a rattling Dodge Neon, and super bass from trunks of other vehicles made the heart beat in spastic irregularity.

Those in attendance drank and waited for the gloves to come on, which was fine with Josh, who had been drinking since as soon as he could get to a convenience store after school. There was a ravaged beer box, blue and silver, shredded along with jerky packages in the bed of his truck. Twelve crushed cans lay about the ground like crumpled silvery asteroids. He was all-too-happy to give the gloves to the first contenders: a senior named Winston—a veteran classman acclimated to bloodshed—and the tender freshman named Ricky. Winston held out his gloves. As Ricky went to tap them he was slugged on the side of the head and fell over like a tree with rotted roots. With that, Ricky was welcomed into the fold.

After a keg of beer turned into a metal container of foam, Bowman and his brother arrived. Josh sized-up Burr. The freshman wore a pair of thin athletic shorts, a Nike tee-shirt, white socks that covered his hairless shins like cylinders, and basketball shoes, passed down from his brother–who, if he wasn’t terrified of any speed faster than a trotting pace, would have played the sport—graced Bowman’s feet.

With boxing gloves on, Josh felt like he was putting his hands into a star’s concrete handprints in Hollywood’s Walk of Fame. As Burr slowly put his hands into the slimy, communal gloves, Josh hovered, holding a can of beer in his bulbous, gloved right hand. “Get ready for this,” Josh said as he killed a can and, Christ-like, lifted his arms and bowed his chest, flexing his arms. “This is what you signed up for. I’m gonna to give you a faggorectumy…”

Josh, however, wasn’t prepared for Burr’s silence or the way he stared, eyes like a death row inmate’s gaze. Josh stumbled as he pulled his arms down and turned to pry up the wire fence to enter the ring.

At his end, psyched-up, Josh slammed his gloved knuckles together. His fists went up like Jack Dempsey and he tried to get his feet to dance under his body like Fred Astaire, but was doing poorly at both. But he didn’t know that. Josh thought his body moved smoothly while in actuality he looked like a palsy victim on a dance floor.

As the fighters entered into one another’s reach, the bass became a hum—the party’s ruckus as silent as headlights. At this moment, Josh thought Burr was a Godsend, a wire-framed punching bag. But if God can send a pipsqueak into one’s life, He can also send a hurricane.

Before a constant ringing, Josh felt Burr’s red gloves like bricks. The left side of his head took the hit that sent him to the plywood ring. He could barley open both eyes to see girl’s cut-off shorts and shaved legs, seniors holding sweating red cups, or Burr’s smooth, pointed ankles. And out of his left ear, he couldn’t hear the bass anymore. The ear offered only blood rolling down his neck.