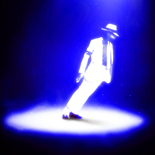 I am under seige. It’s late, a fierce Wyoming wind is rattling the aluminium walls of my trailer and during lulls I’m sure I can hear footsteps scrunching outside. Fools. This ain’t my first rodeo. Just this evening I flipped on the tube and there, like some hideous golem from my past, was Exhibit A – leering at me from his life of luxury. Seems my erstwhile nemesis is going to be the 1993 half-time act at the Superbowl and will no doubt be dazzling a record audience with his incredible, gravity-defying dance moves. Well, I was never dazzled. Far from it. I was angry, bitter, but never dazzled. Illusion Engineers tend not to be.

Michael Jackson: rich as Croesus, loopier than a sack of polecats and served glasses of chilled Pepsi Cola by roller-skating monkey waiters. I make do with pork brains in milk gravy most nights and if it hadn’t been for an act of altruism on my part five years ago it’d be a fat T-bone steak for me every night, and no mistake. Fact is, I taught the King of Pop how to defy the laws of physics; and if this was a fair world that would count for something, but it isn’t, so it doesn’t. Pork brains it is.

There is definitely someone creeping around out there; I must be quick. In the late eighties I worked at the Neverland ranch. Somebody had to. Every night I thrilled audiences with my hilarious “drunk” routine and just when people thought “ho-hum, seen it all before” I would sway beyond my centre of gravity without any visible means of support and that absolutely slayed ’em. People liked me. I liked myself. Pity it didn’t last.

One night there’s audience commotion and, guess what, Michael Jackson takes a pew; arriving fashionably late and thereby missing – much to my annoyance – my spectacular entrance and special salute to the audience. When I started swaying Jackson fairly ripped the arms off his chair with excitement and rushed to meet me after the show. I was flattered, and casually mentioned if he ever wanted to do the trick himself on stage, live, no cables necessary, I knew a way to do it and even though he affected disinterest, I knew his thoughts were tumbling like socks in a washer. “How would you go about doing that?” he asked in that sing-song voice of his and fool that I was, I told him.

I explained that, at a pre-arranged point in the performance, wooden pegs would rise from the stage floor. He would casually shimmy over and, doing a lot of business with his hands or, say, a white trilby, discretely click the locking mechanism in the heels of his shoes over the top of the pegs. Then, using ankle supports and a lot of back leg muscle he would tilt slowly forward and bask in the applause of the crowd.

Well, Jacko rubbed what passed for his chin at this and said he’d think it over but, surprise, surprise, my Neverland contract went up in smoke soon after and a few months later I and the rest of the world witnessed the video for “Smooth Criminal”. Behold the King of Pop! Bold as brass, swaying this way and that and, apart from an insultingly short article in the National Enquirer, not one person believed me when I protested Michael Jackson had stolen my anti-gravity dancing shoes. Some even accused me of stealing the idea from him! Trust me, when you’ve been booed off in the Borscht you know the end is nigh.

A note has just been pushed under my door; this is intolerable. Jackson filed US patent No. 5,255,452 earlier this year describing the anti-gravity lean I myself invented, and I have spent many a night in this battered old trailer cogitating on my imprudence and wondering whether the income from a patent would have paid off my debts or stopped the bailiffs moving in or convinced my dear Jeanie to stay. Somehow, I don’t think so. This note, then:

“You are a wronged man and shall have justice. Peace.”

It made no sense at first, I gaped at the words until they swam. Then – my heart leaping like a gazelle – I lunged for the door and there on the top step I found a small briefcase and when I flipped the silver locks I found it to be filled with neat little packets of money, more than I’d ever seen. It was colder than a witch’s tit outside but I stashed the case under the sink and then clapped down the steps in my flip-flops, my gold and black dressing gown flapping wide as I stumbled between the trailers. After frantic minutes I reached the broken gates of the trailer park and there, silhouetted in the headlights of an enormous stretch limo, was the unmistakeable figure of Michael Joseph Jackson.

What to do? I could hardly act casual but, madly, the only thing that sprang to mind was that he’d missed my entrance and special salute to the audience all those years ago. So, with some difficulty, I jumped into the air – smashing one of the gate lights and getting showered with sparks – and landed in my “clenched fist, standing statue” stance, my reading glasses fallen over my eyes, my gold and black dressing gown snagged around me. I could see Michael had stopped dead at this and was rubbing his chin and nodding thoughtfully and I thought what a nice man he was after all and that I would watch the Superbowl and wish him all the best.

The headlights of the limo blazed, the slight figure slipped inside and as the huge vehicle wheeled round in a spray of gravel I waved and hollered until the brake lights dwindled and I was alone once more with the trailers and the stars and the fierce Wyoming wind.

Anthony Malone's fiction has been published in Murky Depths, The Delinquent, Lowestoft Chronicle, The Quotable, Litro Online and many others and his short stories are included in the anthologies "Villainy" (Halls Brothers Entertainment) and "Cup Of Joe" (Wicked East Press). He has read at Short Fuse as part of the 2009 Coastal Currents Arts Festival, the London events writLOUD, Tales of the Decongested, Liars’ League, Storytails and One Eye Grey's "Spectres At The Feast" event and recorded for London Link Radio. He lives in London but you can find more of his work at AnthonyMalone.co.uk.