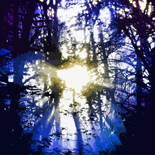 He crossed over the bridge to walk into the underbrush. Grasses and shrubs, small trees and mosses were sitting motionless even as they shone in the rain shadows. The Cherokee son kept his eyes to the ground searching … until he found what he was looking for; a fat log on which to sit. He plopped down on it with his shoulders and head hanging forward, and his long legs bent in v-shapes. Yanking off his socks, he unrolled his poncho to the powder that he shook on his feet. And after unrolling a pair of clean socks out from his poncho, he wiggled his feet inside of them. Then he swallowed an orange pill and several white ones; they had been rolled inside of his clean socks. But as he was tying his soiled socks around his belt in preparation of moving on, he felt the thumps of steps pounding the ground. And when he smelled the cordite of firefights, he knew that soldiers were coming. Steadily advancing, their stealthy steps. Automatically, he fell to the ground. He laid pressed tight to the log on which he had been sitting. Tall, thick underbrush concealed him from the approaching guerrillas; He looked between the leaves to see them advancing up from a nearby tunnel. A steady stream of them were coming to keep coming. An Asian parade of underground soldiers, as many as ants emerging from an ant hill, they were marching onwards. And as the afternoon was stretching into long shadows, now and again, the Cherokee son popped his head up to see more, then more guerrillas emerging from that same underground tunnel. Their steps cracked the branches and rustled the underbrush. They fanned out further to further and took their positions in battles that stretched on through the remainder of the afternoon. Battles passing into the blazing skies of sunset; into and through a pale grape twilight. On until the crux of deepest night. Then the guerrillas returned to the tunnels; many less soldiers than when the battles began. The Cherokee son lay quiet-still. He was yet behind the log tomorrow and tomorrow. Still there after the tomorrows that lead to nights; harrowing nights of owl eyes and the screams of jungle creatures. And while lying motionless, he saw the stars blinking their kisses to the moon. The moon widened to full, and created a valley of light, by which the guerrillas traveled a nighttime path down inside their tunnels. In the tunnels the jungle fighters stayed through the night. Night, until the gray before dawn. They came up then, climbed up through the tunnels into the battles of the new mornings. Battles upon battles through hours after hours, sunsets into sundowns, and beyond. And when the Cherokee son was yet lying tight against the log, he came to realize that he too was moving beyond time measured. He was entering an interim that transfixed him into leaving when he would. He was within a time that had been removed from the warm body of the universe–into the arteries of his being. Time was palpitating inside of him. He could feel it expanding and shrinking: breathing heavy, as was he, lying there through time collapsing around space. Space being swallowed by other spaces–from sundown into sunset. Once, when he looked into the sky, he saw sunspots on the sun; they flashed and jumped to alter the time within his spaces, even as he laid motionless; as still as the log that hid him from the guerrillas. He lay behind the log behind time, and within the time that was being shattered by rocket attacks and mortar fires. He was behind the log to see, to know, and to fear the grenades and the bullets zinging over his head. Yet pressed against the log when sun rays glistened the twilight. Even when the sun sunk behind the mountain, he was yet lying behind the log. Within an immense silence of a mountain night, his eyes held to the womb of mother moon. Her soft, sure light bathed the heavens and gave birth to myriads of baby stars, even as the Cherokee son was drifting off in mystical dreams. When he awoke, he realized that he was being held within a time given over to what he was becoming. And what he was becoming actually saw the sun trembling the next day when mortar attacks shook the earth. He rubbed his eyes and looked again. This time he saw cassava vines sweeping along the earth; rushing as they crawled about and choked everything in their path, including the cavity that swallowed the guerrillas. The next morning the guerrillas broke through the vines’ profundity; they rushed on into bloodshed and death.

At last the guerrillas completed what it was that they came to do.

‘They came to kill and be killed,’ he concluded.

The next morning came with sunrise shining against the dusk of the mountain. Frail facets of sunlight broke into the morning fog. When the guerrillas left, so too did the Cherokee son leave. He hustled away from the killing fields. Away from the skies dark with crows circling. Away from explosives that left plumes of smoke rising from the charred lands. Away from blood-soaked ground. Away from a cratered earth; from cratered minds; from broken bodies. On his way to gone, he realized that he had fulfilled the Cherokee direction of the west; darkness and death.