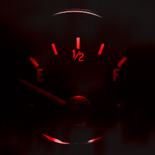 To this trucker, 9:17 in the morning feels the same way as 9:17 in the evening. But unlike the night before, my rig’s gas gauge was nearly on E outside Vernon, a town that makes the Great Chihuahuan desert a little less bearable. The terrain seemed to be bursting with bulbous water towers, and hotel signs poked out of dead, desert soil. The gauge slept on its side in my dash -meaning empty -as I went through the town and hit the last gas station just to do it; just to go to a station a bit more out of the way and a little less busy. This place I found was full service: a rare animal. Yellow construction machines warmed unmanned on the September day in an uncompleted ditch by the filling station.

As I slipped off the truck’s running board, a boy met me in a blue speed suit; looking like he should be in school, but he wasn’t, he was there, trying to be a man in a moustache that wasn’t bristling as beautifully as he hoped.

The boy’s cracked response struck me as pubescent and awkward.

I asked: “Restroom inside?”

Now the only question I had was if they had either paper towels or a hand dryer.

After washing up, I popped my neck as I stomped on the station’s bell cord, and laughed as some heads in the station shot up as the bell rang loudly inside. But most of the workers in bright hardhats didn’t give a damn as they crowded around a radio. I saw its antenna up and to the left, apparently the perfect signal to listen to whatever awfulness was riding the airwaves. A gold investment commercial was barely heard among their passionate discussion of what country each man’s nuclear missiles would turn to glass first.

A man appeared, cropped-cut, dark-skinned, Asian and lanky in a Chevron polo tucked into jeans with cargo pockets, breaking the five-pocket rule.

“Howdy. Don’t see many of you guys,” I said with a good morning smile and a sip of coffee this man must have brewed.

He continued as if he hadn’t heard me: “I don’t want trouble. We’re all citizens.”

“By ‘you’, I meant full-service gas stations, you nut.”

At this moment, we weren’t two men facing-off across a counter, with its change dish, 3.5 oz energy shots, and yin and yang butane lighters; no, we were two different contestants ramming into one another, driving unbuckled and drunk in the incomprehensible demolition derby coupes of confusion.

With a quick glance, the Burmese man turned toward the construction crew in the booth.

“I’ve been called that twice this morning. That’s why I sit in a truck all day. Silence. No radio, no hitchhikers, no stick-riders. Silent as an old lady’s armpit. Just the taste of air conditioning on my teeth.”

The Burmese said: “I’ve been called much worse than ‘sir’ more than twice just this morning.”

“Look at us,” I retorted. “We’re men and words are just words. We could have it worse. We could be living in caves in the Middle East—”

“Are you going to start that again?” I asked as I handed him my credit card. Uneasily, the Asian did the easiest thing he could ever do: make money. He sliced my card through the slit on his register and looked past the customer in front of him—me—and at workers still surrounding the radio like a murder of crows over a deer that’s been hit by a semi. The receipt rolled out with the churn of the little box by the register.

I held up the 20-ounce cup to begin my exit. But he asked, “Where are you from?”

“It certainly isn’t a desert. But now I’m taking a load of Bibles to—”

“Bibles,” he said loud enough to echo down the candy aisle and off the beer glass and into the ears of the construction crew that shared the same handlebar moustache. “Praise God.”

He looked as if I had shoved a toothpick into his urethra. His face peaked like shark’s nose. I knew he wished I had not said what I just said. He wore the dark face of Jesus, and God was more than a little annoyed. So I did all one can do when they tell a bad joke: I took a step back, lifting my cup in a wave.

As I did, the attendant said, “Be safe sir.”

“With these gas prices, no one is safe.”

I pushed the already smudged glass door, and the radio said something about tower two. The door shut and I took a drag of Texas sky.

He turned pale as the underside of a fat man’s flabby man-breast. “I guess you don’t know. We are under attack.”

Not knowing he was terrorizing me, he said, “He better watch his back when he prays to Mecca.”

“Sure he is.” The kid stepped off the running rail after washing the windows. “So where are you headed to?”

“I know,” I said as I climbed up, stopping when I saw his sick look, “I hate Pennsylvania too, but someone has to bring the Gideon gospel to hotels. Like Gideon—”

The lad not as much stood as stooped. “I do what I’m told and go where I’m told. And these are going to be distributed first thing on the twelfth—tomorrow, to make Pennsylvania all the better.”

“By then, it won’t matter. God has punished us.”

“Join the club, sir. God punishes me every time I stop for gas.”