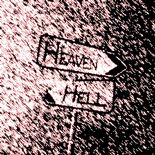 “That sounds fine. As long as the Lord Jesus Christ doesn’t come back before then.”

This was the first response I got from my grandfather, Pawbe, when I told him I wanted to draw.

“When does Jesus want to come back?”

I didn’t respond. I just slid down the humorless, black, Star Wars slide in his backyard. In seconds I reached the bottom where Pawbe stood. He looked immense and dark, like he should have been smoking. But he never put sin to his lips.

“Why would Jesus come back before I grow up and got to go to school?”

“Because you are a sinner, and so am I, so is everyone. We need His saving grace, so He’s coming back to destroy the earth.”

“Destroy?” I asked as I hopped up off the slide’s lip and back up the stairs. I flung my bottom to on top of the slide and gravity worked its magic. In seconds I was back on Pawbe’s backyard, back in front of Pawbe.

“God’s word has all the answers to all your questions.”

“Boring?” He shouted into the Sunday morning air. “That book is what saves you so you’ll be in Heaven after the Son of Man returns.”

“Is that where we go when he comes back?”

“Yes. We float to the glorious kingdom of Heaven with him.”

I thought of the slide. I liked falling more that flying. I’d been on planes before. Planes are like elevators and escalators.

Pawbe continued, “And you want to stay in Heaven, not Hell. Hell is a pit of pain. Remember when that toothpick went through your foot?”

I didn’t remember the pain. No one remembers pain, just incidents.

“It’s like that, but all over your body, and forever.”

“Splendid streets of gold, and we sing of our glorious and great God. Forever.”

“I doubt you’d want to. You’d get to worship. Forever”

By then, I was on the top of the Star Wars slide. I just sat. I looked at the 8:45 sky. I wanted to draw it, clouds and all, but with fighter jets and their fiery exhaust, and with the intense heat of dropped cluster bombs. And maybe even some figures running around with their heads on fire.

I slid down the plastic, movie-marketed slide not even finding the jolt in my gut joyful.

At the bottom, Pawbe looked to the inside of his house where biscuits bloated in the oven.

“Let me ask you something. Have you asked Jesus into your heart?”

I pulled grass out of Pawbe’s lawn. It ripped from the earth with a snap.

“Why not?” He asked in a sharp tone. A tone only someone in authority can get away with. The kind that’s only used when talking to children.

“Oh, bologna! You’ve been to church. You’ve seen the people come to the front when I’m done preaching, when God calls them.”

“Bologna.” He leaned over. “It’s because you sit in the pew, doodling, ignoring God and your mother doesn’t stop you to save you.”

I pulled the grass apart with my fingers.

I popped my head covered in parted hair head up.

“All you have to do is pray in Jesus’ name and be saved.”

I did remember one thing from one of Pawbe’s sermons because it scared me.

“But you said God doesn’t revolve around my prayers. But He’ll hear me if I want to be saved and go to Heaven?”

I dropped the grass. All the hope I had was that God would choose to hear me and save me.

I stood up, considered sliding down the wobbly toy slide once more when I heard my dad open the screen door and announce that breakfast was ready.

I looked up at Pawbe with my lower lip shamefully tucked under my top row of teeth.

“We’ll talk about this later,” he said.

“And if I see you doodling in church, I’m going to spank you until you drool.”

Pawbe was God to me, as he stood like an obelisk blocking the sun. Little did I know how much he hated me.

Years later Pawbe died. My brother and I arrived at his church and walked into the first room with an open casket. We looked at the body: grayish, deathlike, gilded with the tint of chemical blood.

My brother asked in a hushed tone like he was going to wake the man up, “Is this Pawbe?”

“It has to be,” I said. “But I remember he looked just like Johnny Cash. Not so much, anymore.”

“Well, he fits the description,” my brother concluded as he perched his head above the body. “Black suit, old and dead. It’s him.”

The room was empty with only 20 minutes to go until the funeral. No mourners, no family members, no gloomy congregation or somber funeral overseers in sight. But the empty room felt right.

We left the Mr. Alexander in the empty room.

During Pawbe’s funeral there was grief for the passed-on, children burying their father, and Bible verses reaffirming a blissful afterlife.

I leaned over, feeling sick and pale with sadness. But I grabbed a stubby pencil on the back of the pew, in the rack along with tithing envelopes. I pulled the envelope open, then pulled it apart until it was only a piece of paper–all with minimum noise loosening and breaking the glue’s hold. I drew the Heaven in my head.