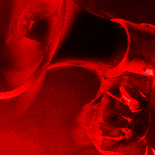 Wildman stood on the soapbox on the corner crying out words from the great handwritten book open in his arms before him; he had worked writing the book for weeks on end, he had planned this day carefully. Hair flying atop his tossing head, he stood screaming.

—blanket is fuzzy is flannel is called a comforter, not a quilt or a knit weave doll! Growth hormones feed the tumor; it’s movable; full of veins but not a squamous cell carcinoma; it’s vascular! The mountain sits on the flat horizon, miles away, big and brown, there’s cactus between here and there, lots of rocks, some low hills before the mountain though from here it looks all flat! Desert is of sand and stone, heat waves make a mirage, heat waves bring forth smiles, for the devil—

I know, answered Vanslyke, scratching at an ear.

The murmur of the crowd about them slowly increased as Wildman went on.

—Howl and yell and scream on demand and you cry out when the door slams by the hospital bed, under which is a rat! Son and daughter are blood relations, share DNA, Einstein has dry hair like a nun! Mother gives birth to a stone, push through the broken water pipe; pain goes with the baby out the uterus! Father gives semen from the penis made in the testicles, likes yelling, has a temper, is full of worry, says god damn! Cabinet holds paint has a glass front, also holds dishes, leather, pencils; Dukie is their dog’s name, go in the kitchen—

Transfixed stood the crowd, impaled by the words. People gathered from all directions, adding to the mob.

Wildman picked up the bullhorn from next to his feet and began using it to ensure his words reached the entire growing crowd before him.

—box of cardboard! Might be wooden! Use rubber bands to shoot at Schlegels in the darkness! Nose doesn’t come off, nose is stuffy full of loose snot fist the nose loosen the snot and the mucus; blow the nose into a tissue! Skull atop the skinny skeleton made of vertebrae and other bones, has a dome on top, a loose jawbone and no eyes! Coyotes aren’t dogs; they’ve teeth and are wild live in the Hollywood hills, have paws pads and claws, will chase the Slav! Cars in rows are black set in the yard there’s a driveway—

—the cars are old, but they run; no engines are stuck and they’re all for sale! Newspaper ads don’t write themselves, sit at the table thinking, drum fingers on the tabletop, worry about the price of the new stove; tap the pen on your nose! Engines have connecting rods, spark plugs, oil and antifreeze, and stink! Sheriff’s all in khaki, wears a hatm has a cigar and a pot belly, watches the deputy zip closed the bodybag holding the dead boy! Walk in shoes or boots with feet that are rough with callus and have long toenails; the skin might dry and crack—

Wildman jumped down from the soapbox and began striding in the direction of City Hall, motioning for the crowd to follow. The people moved as one behind the leader.

Where are we going? said Rumson. What is going on?—

Wildman led the crowd, still screaming through the bullhorn, pumping his fist, his words getting lost in the growing roar of the crowd.

—search the miles, all missing, all gone, all trackless arroyos and dunes, looking forward to a drink of milk! Coroner in the ambulance in a white coat stands for death, does the autopsy, paws though rot and filth! Scream and yell, twist and shout, demand the pain in the leg, curse, swear, and snap! Rust is rough, use naval jelly before you paint, fire the shotgun, sleep in the ship, buy lots of steel wool! Sand in the gullies full of pebbles, it’s hot, there’s a storm coming, a big wind, a great blast, so grit your teeth—

City Hall came into view. The crowd was prepared; prepared by numbers.

—pencil will roll across the table and will fall to the floor with a tap; it’s made of wood and lead has an eraser; it’s good so pick it up!

The crowd engulfed the building, and, at the center, Wildman raised his great book high and slammed it against the great oaken front door of city hall repeatedly.

Lord God, we have paid enough! he screamed.

The crowd went wild. They would enter this building! It was only a building after all.