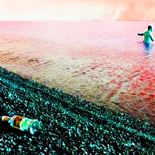 Nathan and Mona both were looking forward to Aaron’s arrival. Besides the fact that they both enjoyed his company, his presence kept them from fighting. Things were becoming difficult between them since Mona had stopped having sex with Nathan around the time she started pursuing Trevor. Aaron was coming over to watch movies with them. It had evolved into a sort of a ritual for them by now, his arrival after work with a small stash of bud concealed in some hidden compartment in his ALICE pack. There was this organic quality to the way things had been going with the hosting of the poetry readings and the open mikes and the workshops that she felt was right, a rightness about these things undeniably. Everyone seemed more honest these days, more raw and more vulnerable. During sad poems, movies or even songs, Aaron cried openly. When she played the Radiohead acoustic cover of Pink Floyd’s ‘Wish You Were Here’, he cried as if the song were personal, as if he had lost someone, as if someone he loved had recently died. But he hadn’t learned how to carry himself burdened with the crushing weight of his life’s grief yet. The phone rang after midnight; it was him nearly incoherent and indecipherable to anyone but her. So completely twisted on booze and pills that she barely recognized his voice, as the voice on the other end of the line repeating, I’m gonna swim to the other side, baby, she didn’t recognize the caller ID the number was a pay phone and although she had never seen a pool at his apartments she decided that it would be the best place to look for him.

Nathan sat at his desk staring intently at the animated feature streaming onto his monitor completely nude with a firm grip on his stubby erection in his thick fingers his hard-on being the only hard spot on his soft, couch
potato body. His pudgy eyes never left the screen as he sat milking his ensanguined little blood engorged pecker completely immersed in the tentacle sex anime. She left the apartment unacknowledged as her fiancé fantasized about fucking an eleven year old Japanese anime character. Even the slamming of the door went unnoticed. The African taxi drivers were spooked: afraid to pick up a fare in this apartment complex since the recent string of unsolved murders of cabbies by neighborhood dope fiends. Now she had to wait for her taxi in front of the quickie mart next to the complex. When the driver stopped in the Foxmoor complex she paid the fare and got out of the cab by the breezeway that led up to Aaron’s apartment. She realized she didn’t even know where the pool was located. After a few minutes walking around, she found it. She could hear him splashing around in the cool blue water, still very much alive singing Concrete Blonde’s ‘Bloodletting’. When she finally got within view of the pool she could see him swimming with a half-full bottle of vodka floating in the pool next to him and a joint dangling from his lips, floating easily on his back looking at the stars and something about the image of him at that moment made her think of her sister. Sometimes she missed her so bad it hurt. That’s where he was now was at that place where it hurt. She wondered who it could be as she walked toward the pool’s black wrought iron gate, already taking off her clothes automatically as if she had no choice. He had left a joint sitting beside his clothes at the edge of the pool. Mona picked up the roach and lit it with his Zippo. He floated in the opposite end of the pool staring up into the empty sky singing, “So messed up I want you here. In my room I want you here. Now we’re gonna be face to face. And I lay right down in my favorite place. Now I wanna be your dog. Now I wanna be your dog, now I wanna be your dog, now I wanna be your dog. Come on! now I’m ready to close my eyes, now I’m ready to close my mind, now I’m ready to close, to feel your hand and lose my heart on the burning sand. Now I wanna be your dog, now I wanna be your dog, now I wanna be your dog. Come on!” He didn’t hear the iron gate slam shut with the force of the thick black spring on its hinges. He didn’t notice her until she surfaced beside him and smiled, her face shining with wetness. In the slippery lights of the pool, it seemed as if she had always been with him. As if it had always been this way. As if she had always been his somehow. He knew that was a lie, another of the mind’s grandiose illusions, a chimera of intimacy–even with this beautiful creature floating lazily beside him. He reached for the bottle of vodka floating in the water next to him and poured its burning contents down his throat for several seconds until he breathed some of the vodka into his lungs. He let go of the plastic bottle–now nearly empty as he began to cough so hard she thought he was going to throw up. It scorched his throat going down, then settled in his belly where it burned in his guts. Goddamn that was good. He sounded like his father. Was that one of his lessons? Was that how he learned how to feel one pain and to chase away another? He replaced the top and let the plastic bottle float off again. Mona had swum to the edge of the pool. She reclined, half floating onto the lighted concrete steps of the shallow water. Her head was tilted back so far only her face was above the waterline. She smoked, stared at the stars, only acknowledging his face sliding gently between her thighs by spreading her legs even further apart. She sculpted her lips into an O and blew smoke rings around the stars, wondering how long he could hold his breath.

Joey Darrell Cloudy is a writer of no import and as such served as one of the Publishers and Assistant Editor of Death List Five (voice of the lunatic fringe), an arts and literary magazine. He also sat on the board, as a figure head, as one of the founders of Project 108 Productions. A non-profit dedicated to promoting artistic integrity and serving as an interface between the somnambulistic public and those clinging onto the frayed edges of the typewriters ribbon.

Tom Cat Press was formed in 2002 to publish his first book of poetry Howl 18 poems for Allen Ginsberg. He has just completed his first novel titled Tramp. A libertine adventure of sex and drugs and poetry in that order, set in Dallas ‘historic Deep Ellum at the beginning of the millennium.

He is currently contemplating the Death while compiling his poems into several books of poetry (tentatively titled; On Women, Pretty Words That Mean Nothing, It’s Complicated, Party In My Mouth, Watermelons, White Women and Cadillac’s and Poetry Ain’t Pretty).