Loud blabbermouths spout unkind things without e’en meaning to
And you would do well not to take it all to heart.
Compulsive talkers talk their heads off till they strain fatigue you
But they themselves stay fresh lark-chirpy playing their part.

Beware the one that tries to win you over willy-nilly
Going on as though his honour’s at stake
And salesman’s suave polished tones far from wobbly wibbly
That without so much as a twinge sell as ready the half-bake.

While it is good to be open spontaneous, like at booth well-manned,
It being awkward to measure each uttered word;
For conversation sounds stilted when thought, preplanned,
Its beauty lies in the flow’s own twists and turns blurred.

Still, be always right, seldom hurt with careless blathering,
Thoughts clear thought out are preferable to blabbering.
Tiptoe through talk forthright, treat kind the wayside sprig.
Beating about the bush harshly only damages each twig.

While weighing your words, might’s well mind your mien, too. – mh clay 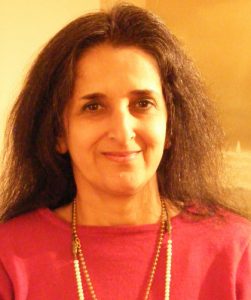 A bit about Saloni: Saloni Kaul, author and poet, first published at the age of ten, has stayed in print since on four continents, including seventeen states of the USA. As critic and columnist, Saloni has all of forty-four years years of being published. Saloni Kaul's first volume, a fifty poem collection was published in the USA in 2009. Subsequent volumes include Universal One and Essentials All.

In addition to performing poetry solo, Saloni Kaul collaborates with artists on installations and exhibitions revolving around her own poetry and with musicians and composers on live and recorded performances of Saloni Kaul poetry set to music.