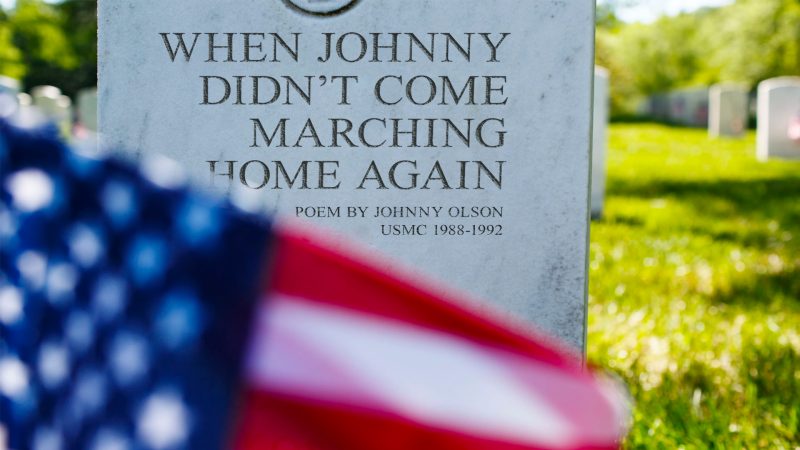 But he did return.

He arrived in a box with a star spangled​
and blood striped flag, draped with care.

​A warrior’s funeral.​
​Complete with a 21 gun salute,
​a lonesome rendition of ​
Taps, and a
​finely folded​
consolation flag.
The same flag that came draped on Johnny’s ​coffin.

The boys held back tears, the men stood tall,
The ladies, one by one they called​…​

They mentioned Johnny’s name on the news.
They remembered his life and honored his memory.
They said they would always remember their hometown hero.
They all felt the loss

Johnny didn’t enlist to be a cog in the great war machine.
​But he knew the ultimate price
​might have to be paid
when he raised his right hand and said:

When his Country called, he did his duty.
With a lump in his throat and with pride on his side,
Johnny went off to ​fight.

He prayed.
​​
He prayed every day he awoke alive,
and doubly so at night,
to live to fight another day​, so help him God.

God was there on Johnny’s lips as he took his final breaths.
​So were the fading memories of home.
So were mom and dad.
So were brother and sister.
So were friends and lovers.

And so was this final scene –

​A warrior’s funeral.​
​Complete with a 21 gun salute,
​a lonesome rendition of ​
Taps, and a
​finely folded​
consolation flag.

This is what Johnny saw as he looked up
at foreign skies.
​
He never asked why.
He knew this was his time.
​He knew this was his duty.
Johnny said his last prayer
and his final goodbyes.
​No fanfare, no fame.
Just another life given,
a sacrifice made
in ​this deadly game
named ​
freedom.​

And remember the meaning of this day,

When all the Johnny’s didn’t come marching home.

Because this is worth reading on this Day…
Here’s to the day when no new boxes come home, no new flags are draped and folded, no new tears are wrenched from newly aching hearts. Thanks to Johnny O for these Memorial words! May we learn, at last, to practice war no more. – mh clay