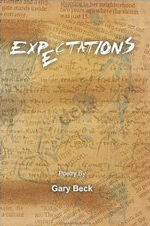 This is a great opening to a collection by one of our Contributing Poets, Gary Beck - Expectations. It's a heavy read! Keep your hands on the wheel. - mh