“Optics is the philosophy of extracting daylight from night.” In the eternal gloominess
after the withering of a candle, at last he lifted his hands
so dusty with silver grey. People flocked to the pile of ore
he had dug out. “We make a lock out of it,

so daylight will evaporate no more!” Wolfram remained imperturbable
in a Petri dish, shimmering like an unfolding lotus
rising from sacred relics. He looked outside: the earth had been divided into two
by light and shadow. The Old World
in gauzy pink dusk, while oceans in the New World were surging over
a crescent horizon. Once inside the lock cylinder

restless sounds converted into tranquility, spheres of tungsten wires sank and floated up
in branches of the river of night, purged itself of dross
and shone. “Sleep now! The flames on the eastern ranges
will quench it with more heat and light!” They fell asleep with prayers or totems, none of whom rose early the next day

to witness this reunion. Wolfram, a blind saint, wrapped in rays of light
without knowing it, walked past the cliffs, bumped into the sun
but walked again through it, like what he did
back in savage times, he hesitated a moment
wondering what it was, that he was brushing elbows with 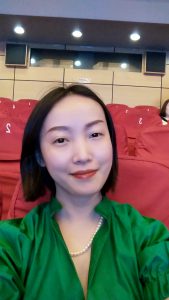 A bit about Yin: Yin Xiaoyuan (Yīn Xiǎoyuán, “殷晓媛” in Chinese) is an avant-garde, crossover epic poet as well as a trans-genre & multilingual writer, founder of Encyclopedic Poetry School (est. 2007), initiator of hermaphroditic writing movement and chief drafter of Declaration of Hermaphroditic Writing. She is author of 18 encyclopedic epics (which add up to a total of 70 thousand lines) and 24 series of poems with themes varying from physics to chemistry, biology, geography, geology, psychology, calligraphy, photography, musicology, geometry, atmospheric sciences and information sciences. She is member of China Writers Association, Translators Association of China and Poetry Institute of China. Her works written in Chinese, English, Japanese, German and French were widely published home and abroad in U.S.A., Canada, Japan, Germany, Australian and Thailand, etc. She has published eight books including four poetry anthologies: Ephemeral Memories, Beyond the Tzolk'in, Avant-garde Trilogy and Agent d’ensemencement des nuages (Encyclopedic Poetry School’ 10th Anniversary Series).