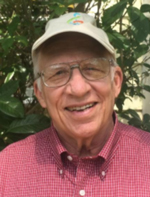 A bit about Robert: Bob Demaree is the author of four book-length collections of poems, including Other Ladders, published in 2017, by Beech River Books. His poems have received first place in competitions sponsored by the Poetry Society of New Hampshire and the Burlington Writers Club and have appeared in over 150 periodicals. A retired educator, he lives in Burlington, North Carolina and Wolfeboro, New Hampshire.