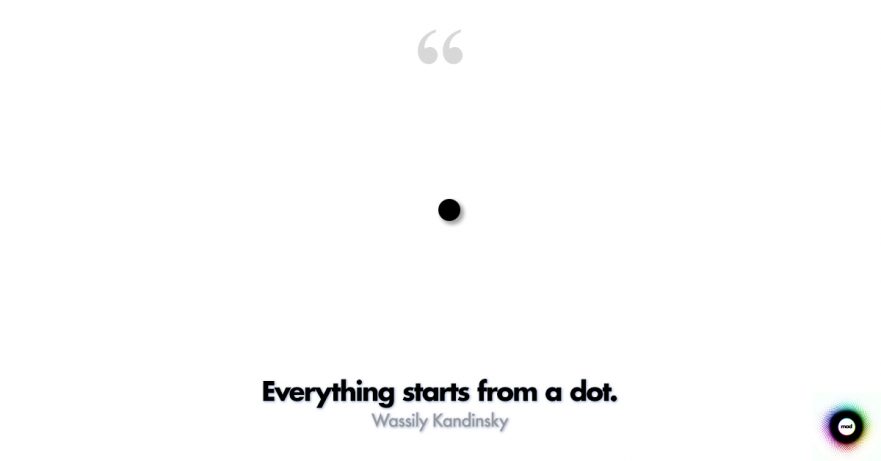 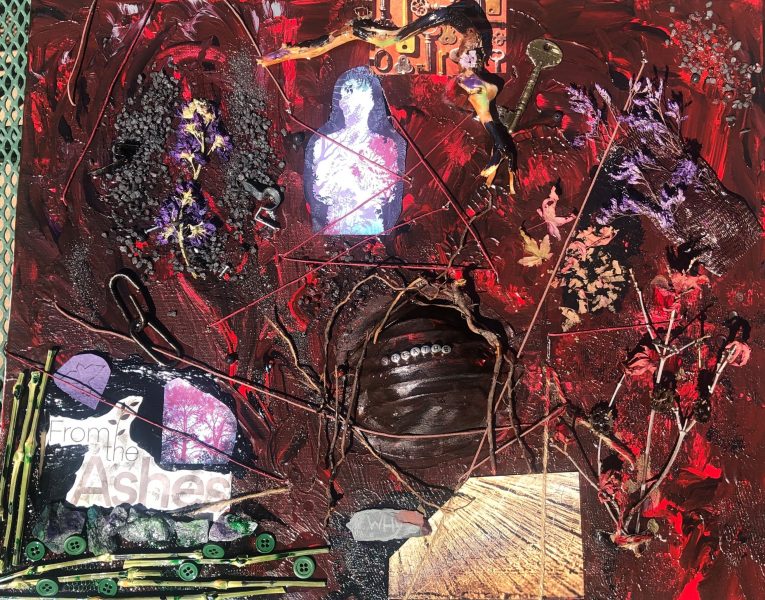 To see all of Jada’s beautifully chaotic collages, as well as our other resident artists (50 and counting!) take a virtual stroll thru Mad Swirl’s Mad Gallery!

This past week on Mad Swirl’s Poetry Forum… we had nothing amiss with a dog in bliss; we Darthed the diff in a rasta spliff; we licensed the lot for doing or not; we left heart behind for humankind; we oceaned again as river and rain; we rang in place with a funny face; we mourned life in the lurch after a roadside search. We’re driven by what we’re given. ~ MH Clay

I know a kid who got killed by the police. by Ron Riekki

He was a kid. His wife was pregnant, but
he was a kid. Just out of high school.
He looked like a kid. He was white.

And I had a friend who was killed
by the police. And his wife was pregnant. And he looked like a kid.
Because he was.

editors note: A search for drugs, guns, life; but no seizure. – mh clay

Make a funny face cuz you want to
Why is she hiding in shadow
Make a funny face cuz you can
Leaping from silence
The powers refuse to tell the Truth
All the faces in the mirror’s memory stare like mullet
Their intention is to divide us
Even from 10,000 light-years away
Your broken-hearted smile
Is a railroad bed
Full of train horn
Blasting at the starlight crossing
Eyes are hung up, gnawing
On shadow and light
You are the Angel
Talking inside into Existing
Littoral zone singing Emily Dickinson’s edge of infinity
Then Death is right up in my face
Licking clay from my spirit
Until a ringing bell of light
Is all I am

editors note: How to lose weight on the Angel Express. – mh clay

I will never be the same again by Hem Raj Bastola

I am the river,
I am the rain!
Visible cloud my life
I will never be
The same again.

Was a child,
Not anymore.
Deep you are
Deeper you want to go.
It is the process,
Anywhere you see.
Struggle a life!
What do you want to be?

Wanted to be like:
The lake stagnant
Not static, an inconstant flux.
Neither can stop the cycle
Nor any trick to Dam.
Ever fickle is a human!
Look.

Change is what?
A phenomenon you see.
In order to exist and to be,
Meandering I flow
Stage to stage passing.
And surrender,
To the ocean finally.
The source!
The eternity!

editors note: I sea therefore I am. – mh clay

leave your heart behind by Andrea Damic

war, destruction, refuge
taken in shelters, if
you are lucky to stay alive

she heard it said, to
leave your heart
behind

have faith, that
one day you shall return to
your ‘abandoned’ kind

until then, memories
linger, burning; unsure if
luck is what kept her alive

that somewhere else
lives a better,
Humankind

editors note: The price to pay for survival at any cost. – mh clay

We name it life, unknown of what it is.
Within it, we exert some thousand wills
responsible for dullness, ecstasy, and craft.
Random ends in ignorance produced
by those whose only mission is decay.
We’re not, and then we are, and then we’re not.
Brief wearers of this chain of straw,
we owe no one. There’s nobody to owe.
When faced with choices, we can do or not;
for ultimately nothing parts the two.
We can manufacture ties of loyalty,
but these exist alone to test or break.
Unpalatable it is, perhaps,
but no opinion counts that’s worth the name.
This is the blood and bone of us.
Some it scares; others liberates.

editors note: License without learner’s permit; we’re destined to drive this into the ground. – mh clay

smoke a spliff?
Will spliffing take me to the dark side?

bend your back under a metal bar
Will limbo-ing convert Luke-Sky-Walker to the dark side?

walk on broken glass
Will glass-walking make Leia love me?

put-on a lime thong
Will thonging release me to the surf side?

editors note: It all starts with spliffing. The Force Be(ware) With You! – mh clay

MY DOG WHO WEIGHS MORE THAN ME by Michael Brownstein

My hand goes through his fur as if it were sand,
his loose leaf skin water,
and he lays his large head on my lap,
snores,
his work as a dog done for today.
It is time to sleep.
He snores louder,
his body still,
all of his exuberance and noisy appreciation of life
idled to a list of breaths,
the warm sand of his fur,
the cool water of his skin.

If you’re chasing down a read then catch this week’s featured story, “The Pursuit“ by Henry Felerski!

Here’s how the whole hunt begins: 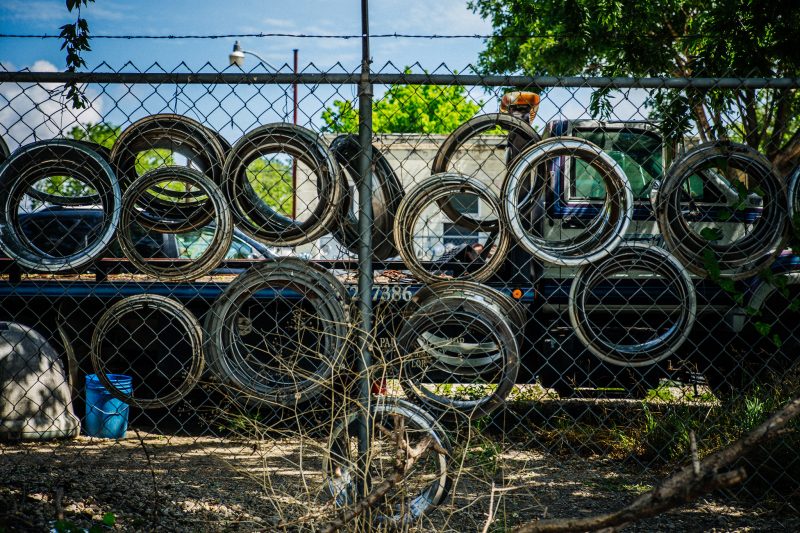 “What Keeps Us in Pieces” by Tyler Malone

When Peter was arrested, at first I was shocked. Shortly after, a numbness set in as I listened to other opinions on the event.

My friends said there’s no way he did it. Peter was our friend, they remind me. He was gentle and trustworthy and he would never do something like that. I reflect on the sneering remarks they made behind his back about his desperate attempts to woo Cindy West.

My parents told me Peter was always troubled, that it was just a matter of time before he set off on the criminal path. They reminded me that they always thought he was a bad influence. I reminded them of the time they invited Peter to spend a week over summer vacation in Florida with us at my great aunt’s…

Track down the rest of Peter’s tale over here! 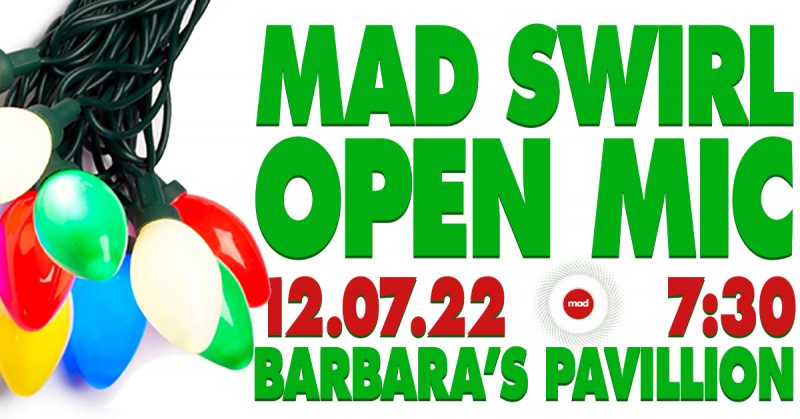 Join Mad Swirl this 1st Wednesday of December (aka 12.07.22) when we’ll once again be doin’ the open mic voodoo that we do do at our OC home, BARBARA’S PAVILLION and from our Mad Zoom Room (broadcasted via FB Live)!

Starting at 7:30pm, join host MH Clay & guest host Desmene Statum as we will kick off these open mic’n Mad Swirl’n festivities with some musical grooves brought to you by Swirve (Chris & Tamitha Curiel, Gerard Bendiks) followed by our usual unusual open mic!