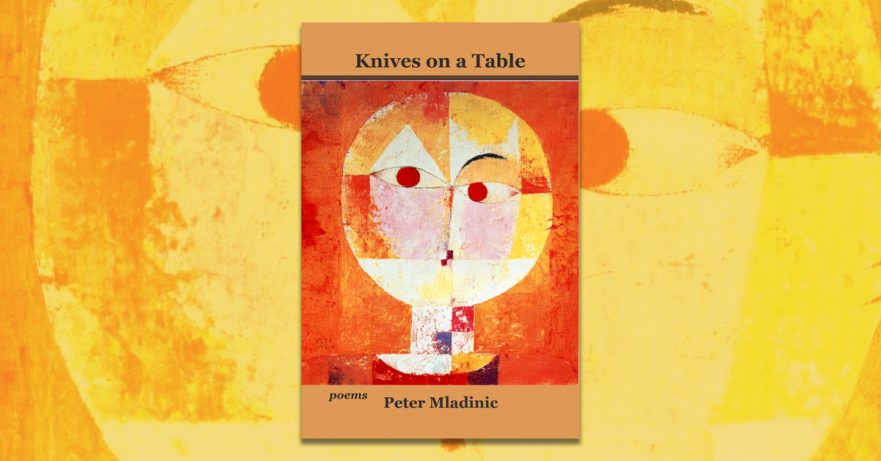 Knives on a Table by Pete Mladinic

It’s noire. He gives you stories and confessions in black and white, you spark images with color in your own mind. It’s a portrait gallery, a nickelodeon; stories about people, a moving picture peep show, exposing the raw nerves of lives.

His poems can be surreal; making you consider a different relationship with Death as in “To My Shrink,”

… I lie awake at night thinking of Death.
She’s my girlfriend, I said.
I liked how that sounded
so I said my girlfriend Death drives
a silver Corvette.
Sometimes, she wears
a death uniform that I watch her
unbutton and step out of…

Or giving life to inanimate objects as in “Big”:

…By April
the paper clips were staying out
all night. They’d come home, big
as Primo Carnera, looking chipper,
but with circles underneath their eyes.
By May the ashtrays had gotten
big enough to swim in…

His poems can be sober. He writes as an observer, a stranger, a teller of all, especially on himself; like in “My Shadow on a Rainy Day,”

I like the sound
of the late wrestler Antonino Rocca’s name.
Cornflakes please my ear.
I like the smell of gasoline, the touch of leather,
but I don’t like the thought of animals killed for leather.

And in “His Vietnam Tour,”

Ask him the names of GI’s he knew.
Ask him to put a face to a name.
Ask about barbed wire.
Black chevrons sewn on green,
gold chevrons pinned on collars,
Seiko watches, mosquito nets,
monsoon rains, the Stars and Stripes
lists of dead and missing…

…As deputies lead a prisoner
through an airport corridor,
someone appears from a phone booth,
puts a pistol to the prisoner’s head
and pulls the trigger.
In the scuffle the shooter goes down,
the pistol wrenched away by a deputy.
What if I were the man in the phone booth?

Or the five-part, tragic tale of “Bobby Greenlease,”

Full figured is what they’d call you today.
A blowsy brunette,
your small dark eyes
spoke a quiet mirth.

A Kansas girl
on Missouri’s death row.
A medium rib eye and strawberry ice cream, your final meal,
you put on a black dress and step into eternity.

There’s a magic feeling this reviewer has been trying to describe that comes from reading great poetry. It evades academic debate. It’s a deep, visceral reaction that is felt in the gut, that cries out “I get it! That speaks to me!” So many of the poems in this collection will create that response. Three to give specific mention are “Damp Wallet,” “Slow Summer Night,” and “What Is Lost Is Not Lost.” You read them; see if your internal chords aren’t strummed.

Finally, throughout these 62 poems, a character appears. He ponders belief in God, “A Child Being Born;” he learns what lies beneath stones, “Shaeffer and the Stones;” he considers getting a cat stoned, “Ham Radio;” he wonders how he’s doing, “The Gradebook;” he investigates a fiery death, “Flames;” he writes of roots in R&B, “Gospel;” he foresees a future (his?), “Schaeffer Is Next;” he contends a cause, “Schaeffer Lights a Candle;” he calls beauty from chaos, “Schaeffer’s Notion of Beauty.” When you have read Knives on a Table, along with all the feels you’ll feel, will come the question: Who the hell is Schaeffer?

We think Mr. Mladinic knows but isn’t telling (why should he?). We think he’s leaving the answer up to us. We don’t think you’ll know until you get yourself a copy and read Knives on a Table. We insist. You’ll be glad you did.