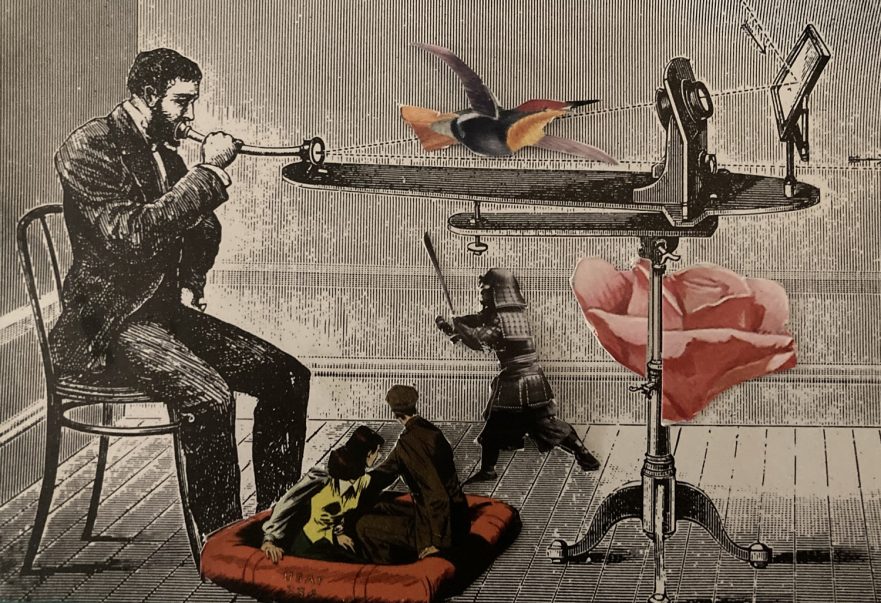 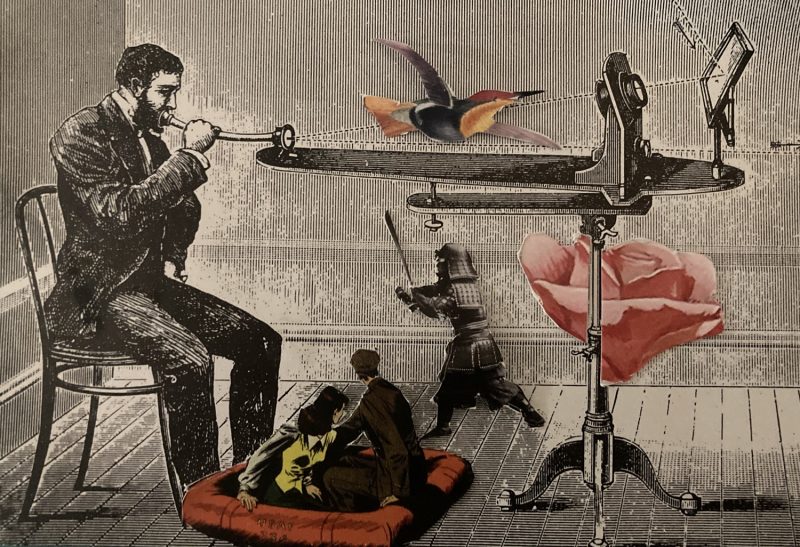 Mad Swirl is excited to welcome returning collage-artist Howie Good back to the gallery with some more of his surreal and inventive work. The way he builds his photos is magnificent and each piece seems to have a dark, mysterious and mystical story to share from some place deep in Goods’ imagination. His latest collection of collages feel simultaneously vintage and brand new, like something that’s long since passed and yet still, something that is yet to come…

This past week on Mad Swirl’s Poetry Forum… we gods felt in a slow melt; we saw what unwinds, before and behind; we enjoyed the pacing of not racing; we in luck abounded by bird song surrounded; we absent transitioned in fetal position; we gave no words to flipping bird; we had to face up to a life in cheap lace-ups. With string pulled tight, we live, we write. ~ MH Clay

The Man With The Imaginary Guitar by Ian Mullins

You don’t want a job. Who does?
Who wants to be dumb enough
not to know that every slave
wears a collar? Collars and ties
tell themselves that because
they can slow down at the lights
and throw an empty can
at the losers waiting for the bus
they must be well up the ladder
they grease with their tongues.

But you need a job; starving
doesn’t suit. And walking the streets
in battered brown shoes
you see why you need that collar.
See the man playing imaginary guitar
on Button Street, a pick away
from where The Beatles bought
their first guitars. Or the woman
crouching in a dog-pissed doorway
rocking to an inaudible tune,
trying to remember the baby
they snatched before the cord
was cut. Or the desperate man
staring down his face
in the shoe-store window. Cheap lace-ups
for the interview; 29.99 a pair.

Gets a Poem by J. K. Durick

Some things don’t get a poem
Don’t even deserve a poem
Getting all dressed up in words
And devices, personified, metaphor’d
Even simile’d
Some things just don’t deserve being
Wrapped up in words, in sounds
Like today at the supermarket, I began
Thinking “Supermarket in California”
But got the Vermont version
Ragged people, couples pushing half
Empty carts, rarely speaking, rarely even
Looking beyond their cart and perhaps
Tonight’s dinner
And it doesn’t deserve a poem, or get one
A man in the parking lot flipped someone
His middle-finger
Never clear who was on the receiving end
Perhaps all of us
Didn’t flip the bird, a bird could take flight
And rise up out of the scene
Could become a symbol of hopes and dreams
Could land on that light-post and be all of us
There, a fitting image
The mythic bird in all of us
Or it could just turd down on us
like a real bird might
But as I said, some things don’t get a poem
Don’t even deserve one.

A Pregnancy of Wrong-doing by Bhargab Chatterjee

When absence grows like a human foetus it creates its own uterus around itself.
Thick wall is impenetrable, only suspicion flows into it like blood.

editors note: Better to abort than to be stillborn. – mh clay

I take my lunch to work in a plastic bag
marked from the local liquor store
In a hurry, I don’t notice
but someone does and
I start thinking about the dead bird
I passed walking to work that day
I named it Lucky and now, it’s
singing to me in surround sound
Harder to focus
on the small talk-sword in my stomach

I’m nowhere and
Lucky is everywhere

editors note: Paper or plastic; it takes some luck to stab your way out. – mh clay

When they finally
look over their shoulder
to see if I am
catching up to them
there will be nothing to
see folks
because I will be miles back
sitting in a bistro
having brunch
with newfound friends
the sort that likes to kick back
and relax
with tequila
and eggs ranchero
rather than sweat it out
on the race tracks
you see, I know
how to take a hint
the good life is neither
a marathon or a sprint

Up from Calumet by Dan Spencer

Up from angled roads paved on top of ancient beach ridges
that were once the trails of indigenous people
from sedge meadows, calcareous prairies
too sandy, too wet, to plow
where sand was mined to build the railroads and highways
where king rails fish in greenish yellow slag leached marshes

Up 294 North, 80 West from Calumet
past Thornton Quarry, past Ford Motor Company
past the pig services plants
past metal scrap yards
and the Old Indian Boundary Line

past billboards that advertise
fireworks just over the border,
a showcase of all the local injury lawyers
who will get you the money the world owes you

past backhoes and cranes
and rows and rows of jersey barriers
past dump trucks filled with gravel to make new things
and others filled with broken pieces of old roads
to be taken away, but not very far
to join a hundred years of spoil piles
that riddle the South Side
as sure as air raid sirens will be tested on Tuesday mornings
and the coyotes will howl back at them from forest preserves
where they live unnoticed by their human neighbors
or occasionally are mistaken for dogs

The cars and semi-trucks speed directly at me
then under me, sitting in the Southland Oasis
above the overpass looking through walls
of glass at the traffic
watching the circulation of a giant heartless artery

reflections of beautiful young women moving behind me
float like ghosts in the glass… and disappear
I hear the year’s first red-winged blackbirds
far away; almost drowned out by the sound
of the traffic.

editors note: What we can watch beside the dotted-white line. – mh clay

My father and I
beneath the monarch oak
a sapling thrives

treetops
fading into the fog
a kayak appears

editors note: In flashes of synapse, we sense the divine. – mh clay

If you wanna story that’s in your face then check out “Plastic“ by Contributing Writer & Poet Michael Brownstein!

It’s a new world every day, and we need to be new parts in it. So get in line, cogs!

Here’s some features of this featured read to get you on your way: 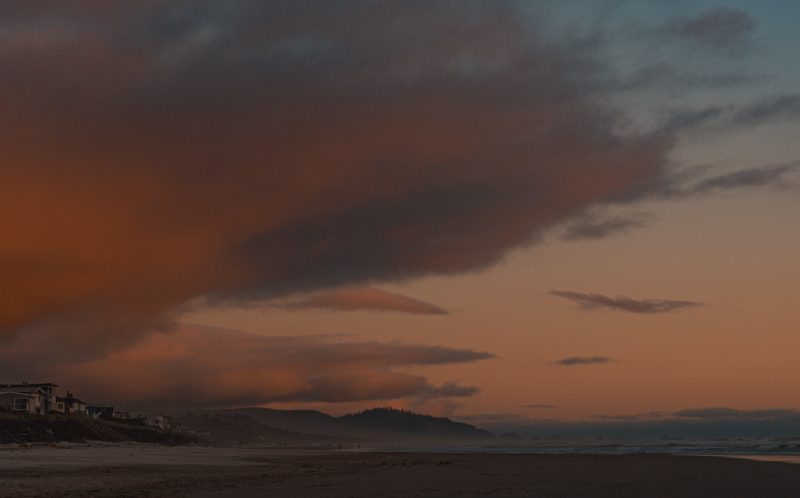 “Images Above, Nothing Below” by Tyler Malone

I don’t remember it being this long last time.

No, last time was over quickly, but I remember another time I waited almost three hours.

We’ve been waiting almost an hour.

Doesn’t matter. It’s going to be worth it. We’re getting new faces, remember? Faces of a better quality than we ever had before.

Just have a little patience.

Slide on over here & save some face!

If you’re looking for a read that’s gonna grow on ya then “The Plant Invasion“ by Contributing Writer Sunil Sharma is sure to spread some roots!

What you don’t love will grow on you, don’t worry. You won’t love it, but it will consume you.

Here’s a few seedlings to get you going: 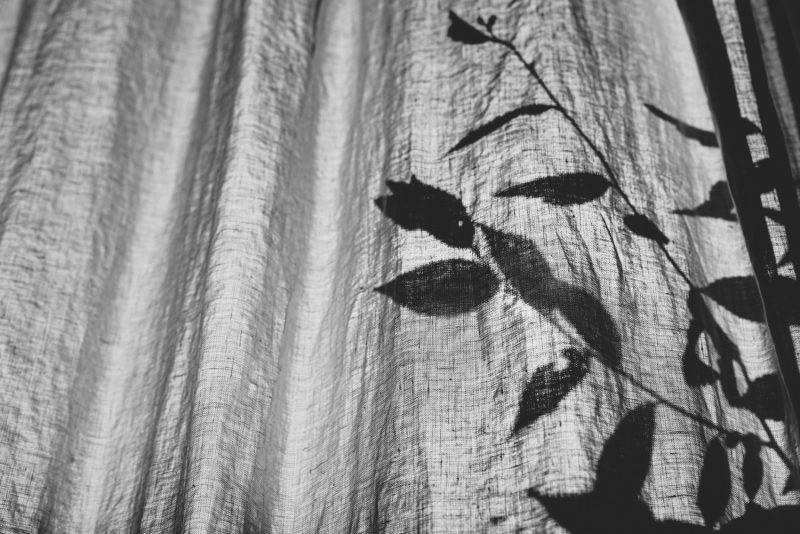 “It Grows” by Tyler Malone

My elder brother has an impressive collection of the cacti! More than 300!

This was a pleasant discovery. I hardly knew about his strange hobby.

Why was the cactus his favorite?

I was visiting him after long absence. In fact, I was never invited to his new posh home at Backway Reclamation, the upscale section of Mumbai. This Sunday afternoon, I was part of a small family reunion. Small: my only younger sister was the other member. It was raining hard. Cold sheets of water hung down from the gray sky. Totally wet, I reached his flat, cleared by the security, first at the ground floor and then, by his secretary and a suspicious bodyguard. The opulence of the 4000-square-feet, 5-room apartment left me speechless. The luxurious furnishings, well-coordinated colors and matching plush interiors dominated…

Get the rest of this cactaceae-inspired read right here!