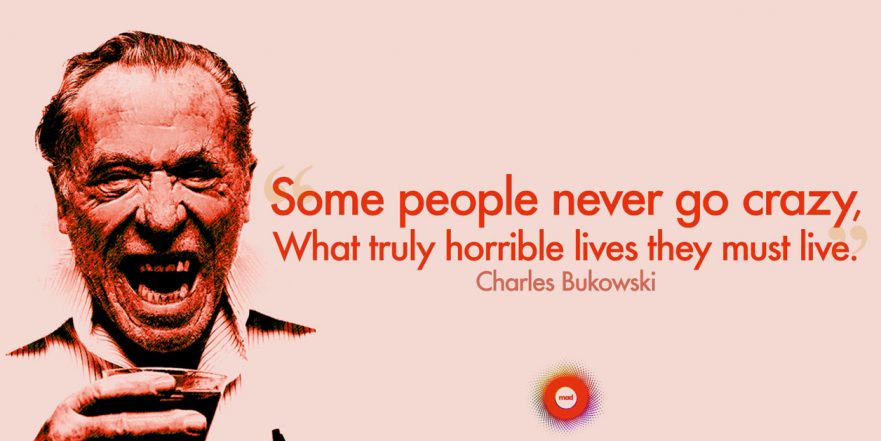 “Some people never go crazy, What truly horrible lives they must live.“ 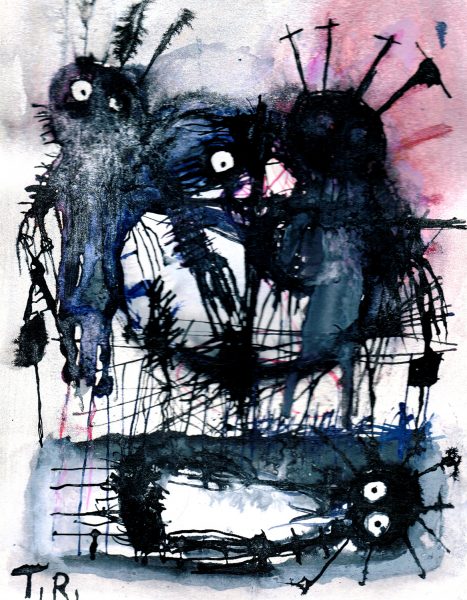 Mad Swirl is proud to showcase another batch of wonderfully weird art from Thomas Riesner. Like some sort of fever dream cave drawings, Thomas’ pieces capture an intensity, mystery, horror and beauty, all at once, and manage to have a sort of ancient energy to them, like they’re telling us something we might’ve missed. Their expressive eyes say a lot while also saying so little and we wish we could pick Riesners’ brain for some answers but we also kind of like jumping to our own conclusions about what each piece is saying. Are they speaking to you, too? ~ Madelyn Olson

This past week on Mad Swirl’s Poetry Forum… we made fun day on Sunday; we went hurtin’ for certain; we were quarry for story; we spoke loud to make proud; we took a bender for gender; we cloyed a bad boy; we gave (us) dopes new hopes. Keep your writes in sight. ~ MH Clay

this time, i am writing to you, not with a broken, bruised, or shattered heart.
(listen to me, this time)
i lost my tongue, fingers, & any other way i could
calligraph, spell, or draw the alphabets of grief. i come to you, with watery, painless tears of mine—
of love, freedom, & of
everything, joy. prisoners, we were. in our homeland. in our hearts.
we ate nothing, but our agonies. drank nothing, but our weeping, salty tears.
you, the once hopeless, handcuffed bird. look at your garden, it’s no more filled with skulls, corpses, or reddened by the flooding water of blood. but of green, & blossoming roses.
this time, cry out your heart. i know, it’s the only way you can giggle. write the name of your fatherland, with the colours of blood, i know, it’s the only way you
can celebrate. this time, you’re no more a prisoner; wander under the shades of all the trees; the canopy of the sky, the dangling stars. but i wish, this poem’s written
someday, not in tears. not in a dream.

editors note: “I wrote the poem on optimism to build strong horses of hope in the mind of the readers about the future.” Let’s saddle up!- mh clay

Outside Boy by Robert L. Martin

Outside boy living in his chosen realm,
swirling with the madness in his head,
listening to the commanding voices thru the mist
and the music of the demon playing
The Aberration of the Gods of Baal,

skies of distorted angels flying in the dark,
swooping down to gather up the nightly seas
and putting them in their pockets
and playing with them with their hairy fingers,

outside boy building up the rage against the
emissaries of the kindhearted God
that live inside the realm
of the American dream,

gloating in his superiority
as he sits in his self-appointed seat
far above his foes that he
cannot and will not see,
marching in proud submission
to the devil’s drums
in step with his wickedness and desires,

little boy with ripened stature
and pliant convictions
emerging from the devil’s mold,
living in his fabricated home,
comes out to play in obedience
to the devil’s command
as he wreaks havoc upon the masses
and security of the children
and the American dream
of Utopia in the world.

“Little outside boy, stay away from us.”

editors note: This is the mind behind the hand that grabs the gun. How do we control this? – mh clay

From the benches, black with people,
there went up a muffled roar…
Ernest Lawrence Thayer: Casey at the Bat

Some boys like to wear dresses
& play with makeup — at first
he wasn’t one of them. But under-
standing yourself takes time; &
even longer to come to view gender
as a fluid concept. He became more
body conscious, spent time looking
for a particular fit to fit his body;
until sparked by a comment from
a member of his Facebook group,
they started going to the mall, trying
on clothes. Began to relish dressing
up, late nineties style with low-rise
jeans & mid-drift tops, not so much
a personal taste as a required uniform
that helped them express their sense
of style. Even wore heels when she
went out. Serious about it. No longer
role-playing. Now dressed for gender.

editors note: Whichever way your fluid flows, dress for success. (We welcome Mark to our crazy congress of Contributing Poets with this submission. Read more of his madness on his new page – check it out.) – mh clay

editors note: It’s a challenge to give direction while holding to your own. – mh clay

The God of Undiminished Returns by Neile Graham

It’s how we hold this moment between us
in summer day’s slow farewell as it shades
into the small quiet night. The dim of it.
Please share that lightening peace.

Its sole stillness is rich with so much hidden
inside. Folded into its many pockets. We’re warm,
safe where the sea breeze lifts our hair.
Please share that lightening.

Because we know the night is not truly
that. It’s full of travel, us working our way
through hoarded scraps of the previous hours.
Please share that.

Don’t let their ragged edges saw at us
while we fall, minds shrill and brittle,
into the icy labyrinths of our dreams.
Please share.

Around us is the travail of nocturnal creatures,
when you’re most gone from me, off into
your own story, the likes of which are only yours.
Please.

editors note: When bringing your own to ours, please, lighten up. – mh clay

A Certain Something by John P. Drudge

editors note: I’m certain of that, too… I think. – mh clay

sunday in the suburbs by Jason Baldinger

cursed again
another round
of boring ass fried chicken
universally bland
not one damn bottle
of hot sauce in sight
they’ve fried it that way
since nineteen and sixty-three
in a strip mall surrounded
by other strip malls
as sunday in the suburbs
goes on in that blasé
he has risen kinda way
vanilla candles hold hands
with east pittsburgh refrigerators
work an afternoon six pack
tip silver with pirates
on every flat-screen
every child locked in a device
sun through plate glass
leaves a little light on the bar
fighting through the dark
it’s a small victory
even if it’s not
damn, it feels
like winning for a change

editors note: Goin’ on for the win. – mh clay

If you gotta need for a read, we got just the thing… “The Shape of Things to Come II“ by Contributing Writer & Poet Randall Rogers.

Gotta live to celebrate death! Day in and day out, dance. Dance to death; dance on your own ashes. 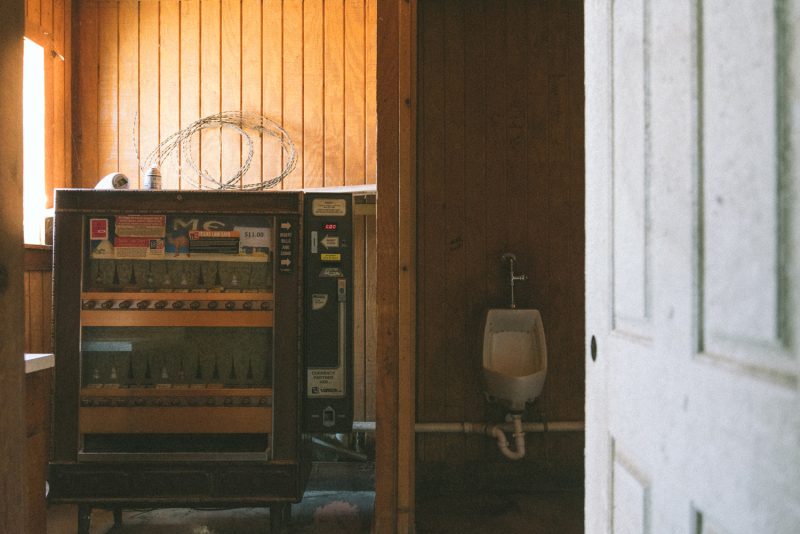 “Reminder of Remains” by Tyler Malone

First of all I’m dead. Or, more exactly, we are all dead. Earth humans discovered that in 2031. It’s common knowledge now. As they say in 2042, never failing to remind us, it’s settled science! No argument here, the Earth used to be crowded, up to seven billions! Now, there is space, beautiful, peaceful, gorgeous elbow room. Lebensraum — living room, to do what you please, we finally got it…

This is the END!… of the tease, that is. Get the rest of Randall’s read right here!

If you wanna slip into a read then slide on into “Big Stupid White Dog“ by Contributing Writer & Poet Jeff Grimshaw!

Here’s a few steps into the rabbit hole: 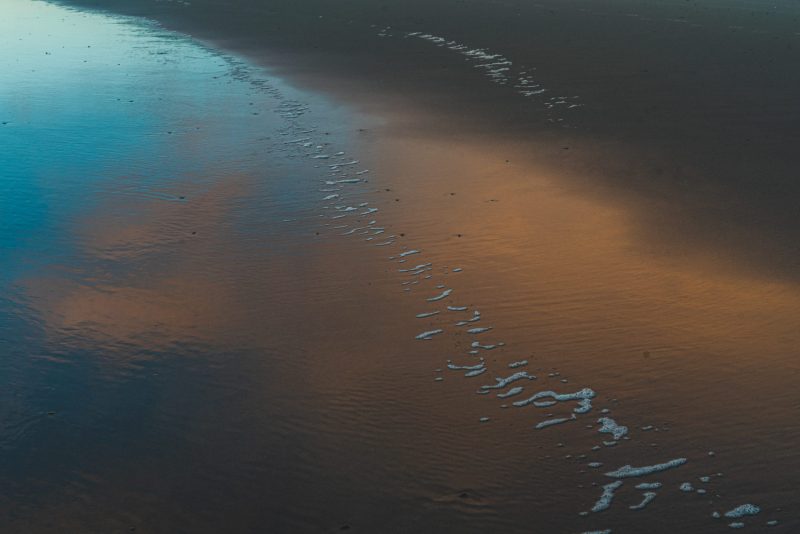 “Still Got the Spirit” by Tyler Malone

“Those clouds look really cheap,” Ryan Bendix said to me. One of the big stupid white dogs had wandered into the field across the street and we were waiting for it to wander back. Our boss told us to “go get him,” but the field was a swamp that time of year, so Plan A was just standing there and waving at the dog from time to time.

That was also Plan B.

Ten minutes ago we’d noticed the three clouds, not so much cheap as perfunctory, over the trees. They slowly moved to the east and out of sight. By and by three more clouds drifted in from the west, looking exactly like the first three clouds. “They aren’t even trying,” Ryan said. He subscribes to one of the “we are living in a simulation” theories of reality, specifically a simulation set up by somebody who stopped giving a shit long ago. The three clouds vanished in the east. It was about 15 seconds before they moved in again from the west, the same three clouds.

Well, perhaps not—I am not totally invested in his simulation theory—but I couldn’t see any differences. Eventually the big stupid white dog strolled back across the street and Ryan and I led him to the chicken yard he was supposed to be guarding. I should say “probably” strolled back, we “probably led him” to the chicken yard, and so on, because my memories are kind of dim and fragmentary on that point—I was still ruminating about those clouds…

Stroll on over here to get the rest of Jeff’s read on!!