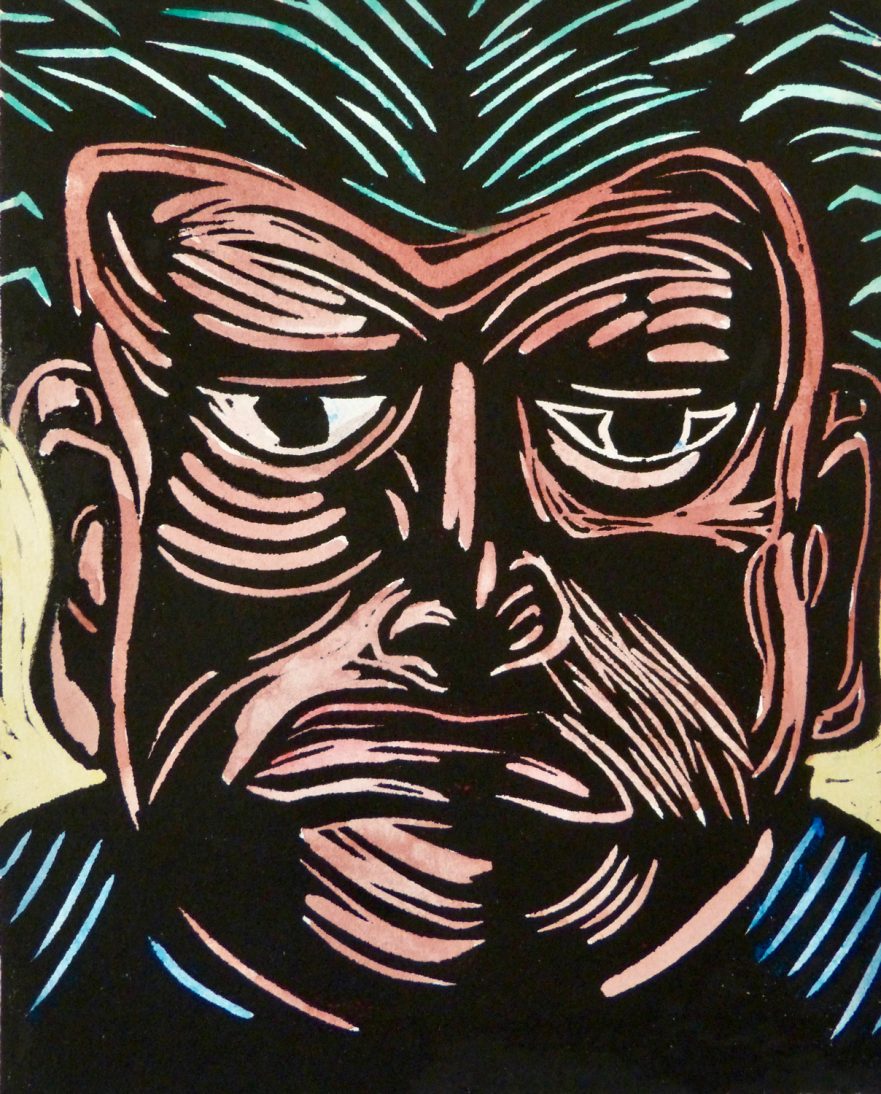 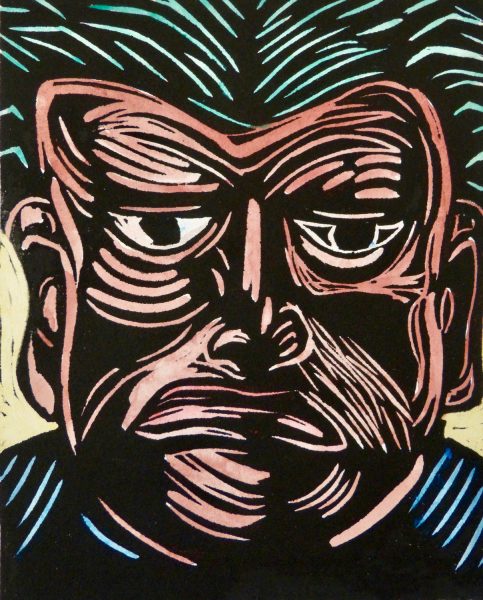 To see all J. Gregory’s darkly intense yet weirdly whimsical canvases, as well as our other resident artists (50 and counting!) take a virtual stroll thru Mad Swirl’s Mad Gallery!

This past week on Mad Swirl’s Poetry Forum… we versed the answer for a fighting dancer; we read what’s amiss while taking a piss; we got vagrancy from a vacancy; we leafed the power in story hour; we credited strife with flashpoint life; we colored away the white from gray; we grew in grace while out of place. Tom-ay-toe, tom-ah-toe, we write what we ought to. ~ MH Clay

Out of Place by Agnes Vojta

If you feel out of place,
let me tell you about the tomato
plant I found growing
on a gravel bar by the river.

A seed from someone’s picnic fell,
germinated, and took root
in the sparse dirt the flood
had swept between the pebbles.

The plant is thriving, bears
four ripe tomatoes. I left
them for the critters and for other
wanderers to marvel.

editors note: Where ever you fall, bear fruit. – mh clay

Not Albino but Axanthic by KJ Hannah Greenberg

Among scribes, neither missing colors nor
The lack of all hues boosts publication. If
Wordsmiths aspire to revealed cogitations,
They’re well-advised to retain all crayons.

editors note: We describe all colors in black and white. – mh clay

A dialogue of light and sound by Christopher Calle

A dialogue of light and sound
Carbon credit NFTs
The only nonfungible thing
is time
and maybe an idea
except anthropologists believe canoes were independently developed
in different corners of this erstwhile flat village
until they wither, and fade, as any hustle eventually does
except real estate
and the corrupt
Who trade wealth for notoriety, and the legacy of an interesting tale;
The black-hearted artist iconized for their relevance, in history after death
Incentives
Wealth
Two arms lengths of compassion
I ask her why she paints the edges of the piece
I ask her why she doesn’t paint the edges of her piece
I ask myself if this is real
Is living between flashpoints a choice?
And if so, who chooses?

They write stories for me;

on the branch, off the branch
zip lining, crisscrossing, aerial
artists, designing on sycamores

the squirrel time, story hour
inviting me in
to all that was hidden
now that the leaves are gone.

The lightning bolt turns to bees
Every poem unwrites the last

editors note: Delicate decisions in a down market. – mh clay

Conversations collected while standing at a urinal by Richard Weaver

Can you read this shit? The prints too damn small. And the light sucks.
Damn NYTimes. Text set at 8.7 point Imperial. We need better light.

Ever noticed that the paper towels disappear before the toilet paper? What’s
that about? I don’t want to know.

Jeez. We’re in a bar drinking rented water. And they think we want to read the Obits or Financial crap? Who the fuck comes to a bar to read in a damn bathroom!?

How can I even pee with such bullshit staring me in the face? If only I could aim higher.

Last week it was the Washington Post. This week it’s the Times. If the Wall Street Journal appears next week I’ll be wiping my ass with it for sure.

Ever noticed the guy at the bar who’s always banging at a computer? Claims he’s the writer here. Some kind of James Joyce. Whatever the fuck that means. He drinks
Guinness like a camel drinks water and always gets here early enough to get the best seat. What a right total bastard.

What deaf moron does the music they pipe in here? It’s about as Irish as my asshole.

Did you ever notice that one of the urinals almost always has saran wrap stretched across it and a frigging sign that says out of order? And it’s the one that’s for children. What’s that about? Jeez.

Ever wondered why there are so few Irish people working in this Irish pub? A shortage of green cards maybe?

It wouldn’t surprise me if they had cameras in here to “protect” us from ourselves. Fecking Nanny state!

Fuck off. I don’t talk to no one in here! You some kind of perv or what?

editors note: Pissed in a pisser while pissing. – mh clay

The Capoeirista by John Najjar

To be on the alert means to be deadly serious,
to be deadly serious means to be sincere to oneself
and it is sincerity that finally leads one to discover the Heaven Way.
The Heavenly Way is above the self, which is mushin, no mind,
or “munen,” no thought.
When mushin is realised, the mind knows no obstructions, no inhibitions
and is emancipated from the thoughts of life and death, gain and loss,
victory and defeat.

From Zen and Japanese culture
by D.T. Suzuki

I dance;
I become but movement and form,
as I step out each move
in a flow of form and motion,
In this struggle for life and death.

I become water and find my measure against another,
win or lose,
This fluid movement is all I am – all I can be.

I throw myself into this dance,
its motion is treacherous yet beautiful.
This struggle to live, to die,
A desire to overcome –
This dance of artifice – fight and play – is ecstatic.

I step out these forms and find myself in this motion
that celebrates the heart –
The wheel of life and death.

In this movement, I find my death.
I lose myself in these forms – the dance;
Its treachery and its beauty.

I am!
I am an emptiness, nothing but form and motion,
There can be nothing else:
I am a Capoeirista,
“Capoeira mata um.”

Here’s a taste to get whet your appetite: 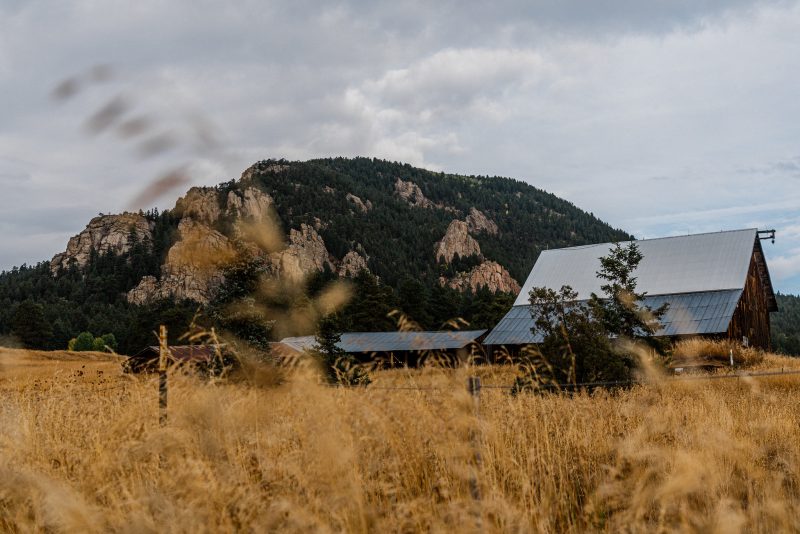 (photo “Off the Grid: Away from Humans” by Tyler Malone)

Honestly, how can normal people fall for scams?

I received an email from a woman we’ll call Valerie who wanted to meet me.

Why? Because I run the support group New Directions, which attracts loads of people. I was to meet her at a fancy restaurant downtown. She would donate $100 to our support group and pick up the tab.

I changed my clothes a few times so I would look attractive, finally deciding on a matching pants set with a black and white herringbone pattern. This looks a bit like birds taking off.

Carefully, I studied the map on how to get to downtown Philadelphia, and then drove my car to the SEPTA parking lot and listened for the ping of change as I deposited it.

Aboard the speeding train, I watched out the window.

I love to see the backs of houses with clothes swinging on the line. It is like a tour of Philadelphia neighborhoods, many poor, but wealthier as we neared Center City, as we call downtown in these parts.

Rarely did I get out of my “comfort zone,” so it was a challenge and I do love a good challenge…

Get the whole meal right here!

If you gotta a need for a read, then check out “Bow Tie Pasta“ by Contributing Writer & Poet Jeff Grimshaw!

Hide, find yourself. You’re there, and you know it. 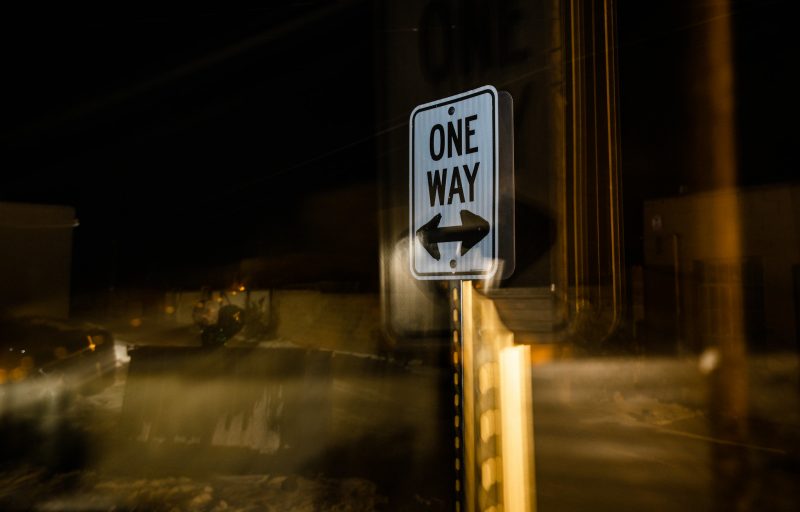 The trunk lid was 20 yards away, twisted by the force of the crash into something like a giant piece of bow tie pasta. She lifted the sleeping bag from the trunk. Mine now, she said. Police sirens dopplered. She hid first among plumes of steam, then in the underbrush, until the cops left. Did they not see her or did they simply ignore her. The sleeping bag was secured with three leather straps. She brought it back to her apartment. There were strange old stains on it, like someone had tried to clean off mildew with a much-too-strong bleach. Maybe I’m scared of it, she said, and stuffed it inside a large plastic garbage bag. Her name was Linda. She put the garbage bag under the bed and left it there when she moved to another apartment a few months later. Then one day when she took her ironing board out of the closet, she found the sleeping bag. She was absolutely sure she had left the sleeping bag behind. Oh well. Maybe not. That night she unrolled it, unzipped it, slept inside it. She had crazy dreams but they mostly evaporated before breakfast…

Get the rest of Jeff’s haunted read right here!

EXTRA! EXTRA! READ ALL ABOUT IT!
The Best of Mad Swirl : v2021 is available right HERE! 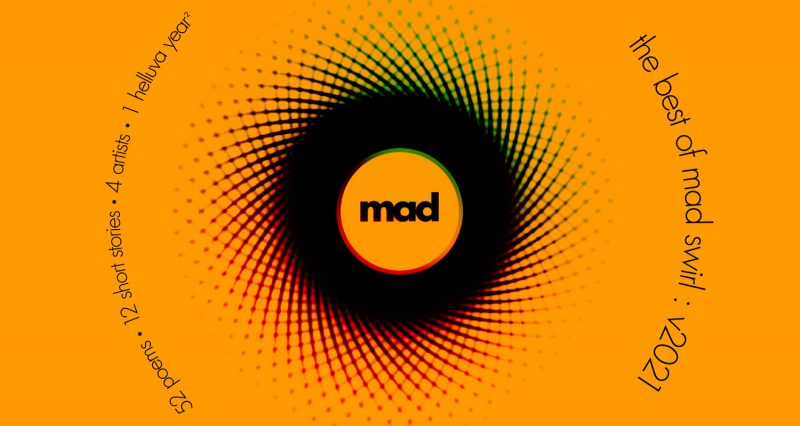 2021 has been yet another extraordinarily challenging year. Thru it all, Mad Swirl was there, every one of the 365 days of it. We didn’t miss a beat. Those beats are what you’ll get when you dig into 2021’s best of collection. Get your firsthand view of one helluva of a f*cking year.

Huge grats & shout-outs to our 2021 featured Contributors (in alphabetical order):

If we’ve enticed you enough to wanna get you your very own copy of “The Best of Mad Swirl : v2021” then get yours right here!