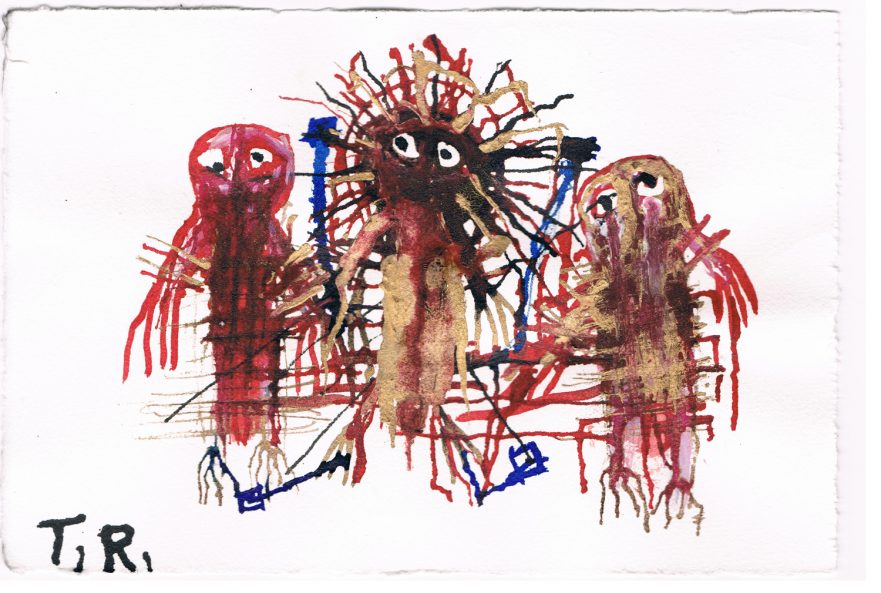 “I’ve got something to live for, because I always wanted to be an artist” 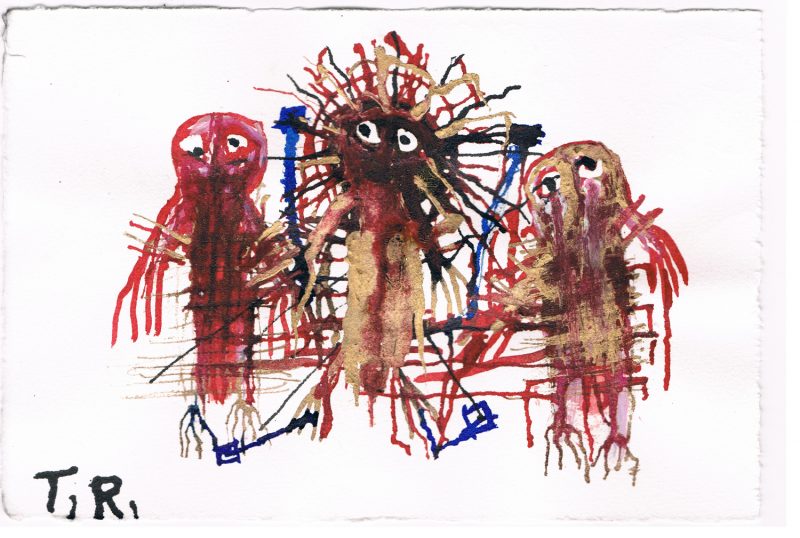 Mad Swirl is pleased to bring back artist Thomas Riesner, who you may remember for his nightmare-ish and dark creatures. As frightening as they appear at first glance – all wobbly lines and big eyes – there’s something endearing about his subjects. A (not quite) humanness that strikes a resemblance to a shadow, or maybe an imaginary friend. Whether you fear them or endear them, you probably can’t pull yourself to look away. And that’s exactly why we came back for more… ~ Madelyn Olson

This past week on Mad Swirl’s Poetry Forum… we got twice seventeen from gardens pristine; we found frustration in concentration; we scratched at the surface of caring with purpose; we parlayed young in toddler’s tongue; we tallied lives by Dockside Knives; we gave no nod to cloud as god; we braved the din with Bard to spin. Our jesters prate on our affronts to fate while we write’em like we see’em. ~ MH Clay

This Insubstantial Pageant by Harley White

Upon our stage we romp and rage
in Goldilocks’s golden cage
amongst colossal cosmic crowd
with spark of liveliness endowed
of pomp and circumstantial fate,
whose worth we underestimate,

in constant discontentment caught
‘and sicklied o’er in cast of thought
so enterprises turn awry’,
with not an inkling as to why.
Oh, actors in this earthly scene,
what do your frantic antics mean?

‘The heartaches and the thousand shocks
that flesh is heir to’ come in flocks,
while nature tenders wherewithal
if we but list her earnest call
in lieu of inner outer din
that sends the senses in a spin.

And yet when all ‘our revels end’
this world will leave a stardust blend
behind, ‘to still a beating mind’
of poet bards midst humankind,
a ‘rack’, or wisp of cloud, as told
in Prospero’s discourse of old;

for sun shall take its final breaths,
as dramatized in stellar deaths,
to be a nebula newborn
celestial heavens to adorn
in evermore creation’s dawn—
yea ‘such stuff as dreams are made on’…

editors note: Leaning hard on the Bard, about our fate we prate. – mh clay

No, no longer a god by Iulia Gherghei

I am a cloud, he said
Lavishly spreading his glee on my windows
No, you are not
I frown and mumble in my chin
You, sir, are a figment of my imagination
Be true to yourself, dear
Your jealousy might change my mood
From fluffy, feathery white I might turn to dark stormy, lightning spitting in a blink of an eye
If I say I am a cloud, then, goddammit
I am
I have all the features
The grace, the plump form, the easiness to glide on the open blue sky
I can smile as easily as I can thunder my curses through my lashes
I definitely spy on you every chance I get
No, no longer I am a god
From now on
you all will treat me as a passing cloud
A midsummer innocent cloud
A light prayer to a merciful sky

editors note: If they say so, we might know so, if only we see them their way. – mh clay

The Pocket-Magpies by Paul Tristram

I’ll trade a Sampson Mordan
ruby glass vinaigrette bottle
a third full of the heartbroken
tears of a ‘tricked’ virgin
3 weeks away from dollymop
… for some dry powder,
a skull & bones Gate-Pass…
and a partway-sincere kiss.
Nah, stay away from Uptown
… the house burglary
turned nasty, ugly and fatal
… you can smell the Murder
across most of the Borough.
Let Sammy know I’m ‘round,
I’ll be in the Jack O’ Spades
just afore midnight next
with The Dockside Knives
… they’re inching Territory.
Ha! they not be sex manacle
wrist-wounds… I’m villain…
they only proper heal in Clink.
Later, yeah… be lucky, girl…
yer looking more and more
like yer dear old mother
with each passing 12 month
… I drank so much Belch
I lost two toes and a finger…
the day they swung her Dead.

A Polyglot Portrait by Colin Dodds

There’s another one at bedtime,
the damnation-and-entreaty dialect
of a disappointed angel

It’s a rough tongue, roughly as relevant
to mom and dad as we are
to the surface of the earth

In it, to tell only the truth
is tantamount to using only half
the letters in the alphabet

editors note: Such a succinct dialect to grow old and lose it. – mh clay

Caring mustn’t be faff, not overcomplicated, burdensome,
A perceived waste of time. Rather, when one extends bits
Of heart, is adroit in affirming feelings, maybe, also gifts
Arits of one’s soul, there ought to be acceptance, concern.

After all, abandonment makes cades out of the best sorts
Of folks, turns ethical beings into moral monsters, tricks
Sentiment down drainpipes, into sewers, causes so many
Types of hurt and longing, makes loving appear onerous.

editors note: Let our “much ado” not be nothing. (Congrats to KJ on the release of her new book, “Owmapow Rides Again.” You can get your copy here.) – mh clay

They say a hurried life’s a hindered one.
So why am I rushing myself through it?
Pushing myself out in order to get some peace.

Rather than finding peace, I’m in pieces.
My memories perpetuated by the present I give myself.
Traveling the speed of light
With no need to go anywhere.
The world at my fingertips,
Everything on tap.
Hanging out with stars in a cosmological cinema,
Fulfilling fantasies in a hollow graphic reality.
Living the dream.

O for the days when it was a pleasure to be bored
Before the sluggish fluency took hold.
Making me frantic,
Alone with my mosquito mind
Fizzing like a pill in my skull,
Fractured by the strain of concentration.

2 Haiku: THE FROST OF DAWN & TREES by Sam Silva

THE FROST OF DAWN

nature breathes, sweats rain
I am in awe by window
views of my garden

If you need a read, stroll on over to Mad Swirl and ease on over to “Emil’s Magic“ by Contributing Writer Jim Bates.

This is society past ourselves; something we want to disappear from.

Here’s a bit of Jim’s tale to start you on your trek: 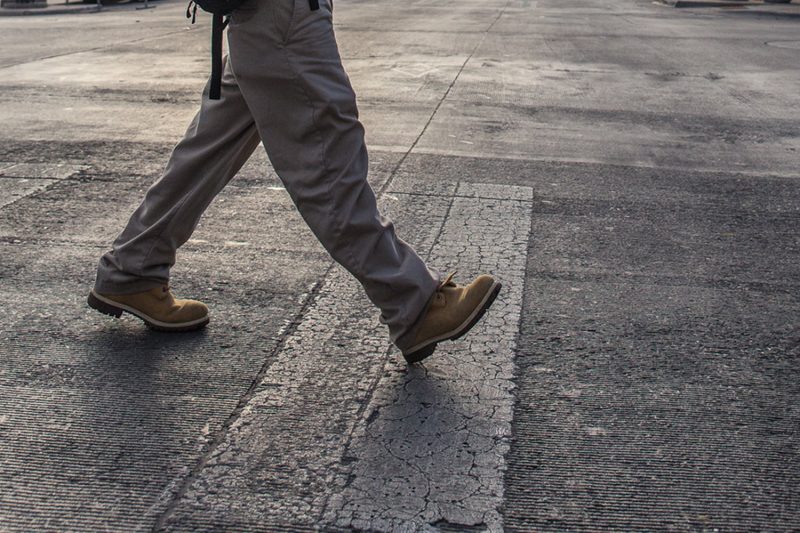 (photo “A Walk Among Walkers” by Tyler Malone)

He was standing off to the side of the city Greenway looking at the sky when he felt a tap on his shoulder. “Hey, what are you doing?”

Emil turned. It was a policeman on bicycle patrol. “I’m just looking at the clouds, officer,” he said, politely. “That one over there reminds me of a bunny rabbit.”

Unimpressed, the cop got off his bike and adjusted his crotch. “I see you down here a lot. Where do you live?”

“Nearby,” he said and then tried to change the subject. “I just like to walk here,” he indicated arbitrarily. The Greenway led from Lake of the Isles, near where they were standing, on the west end of Minneapolis, all the way east to St. Paul, a distance of fifteen miles. People walked and biked on it nearly every moment of the day.

The policeman smirked, “I’ll bet.” He took his radio from his belt and made a call. “I’m bringing a guy in.” He listened for a moment and said, “No, he’s not drunk. I think he’s delusional. Let’s see how he does in lockup overnight and then we’ll take it from there.”

Emil couldn’t help but overhear the conversation. “Officer, I promise I’m not delusional. I’m perfectly sane. I just like to walk and be outdoors.”

“Too bad, buddy, you seem a little off to me. No more walking and being outside for you today.”

Wanna see what abracadabra Emil might have up his sleeve? Then weave your way over here and get the rest of this read on!

If you have a need for a read then heed your feed and check out “Delete“ by Contributing Writer & Poet Ramprasath!

“We don’t want to be here but we have to be, or that’s why we tell people they need to love and consider us.”

Here’s a bit of Ramprasath’s expunging tale to get you goin’: 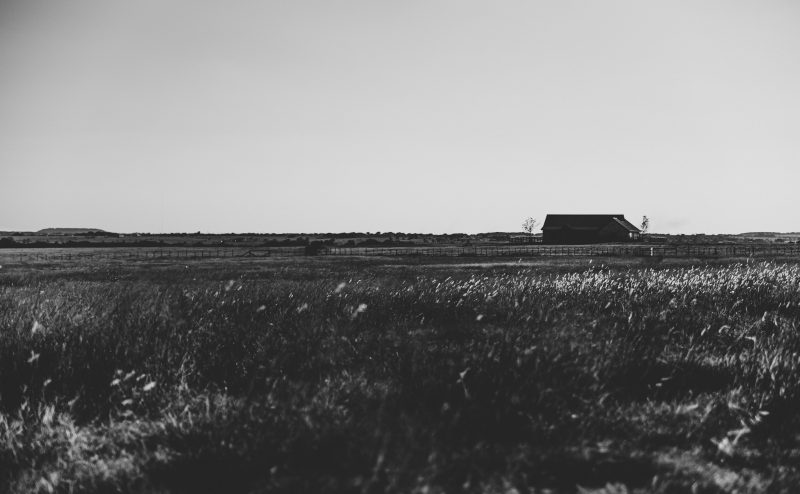 (photo “Backspace to the Space Called Home” by Tyler Malone)

I didn’t like my Fiat. It had become too old. So, I pressed the delete button on it and it was gone. Later that day I saw an advertisement in a newspaper. A girl who was pissed-off with her boyfriend had asked only a dollar in exchange for her new Toyota that she got as a gift from him. But when I approached her in person, she gave it for free.

Next was my annoying neighbor. I didn’t like him right from the day he shifted to my neighborhood. He was always unfriendly, too reserved and mischievous. I pressed the delete button on him and he was gone. Recession forced him to sell off his home to a very friendly neighbor.

Next was my father. I never liked my father…