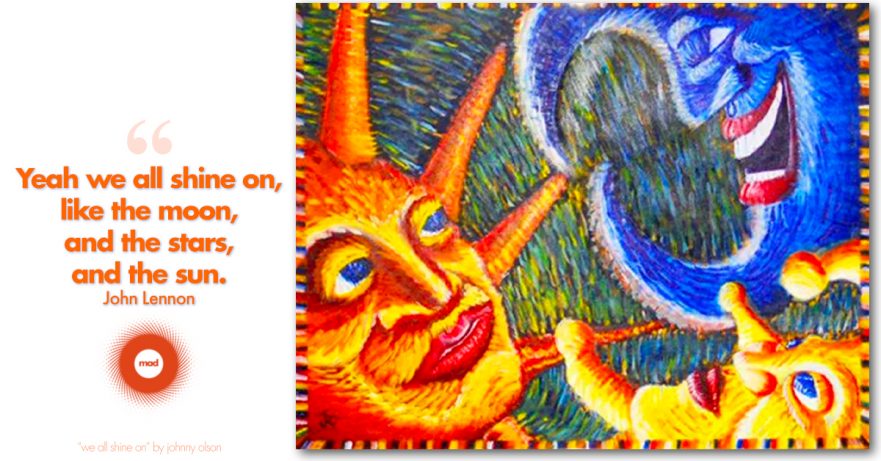 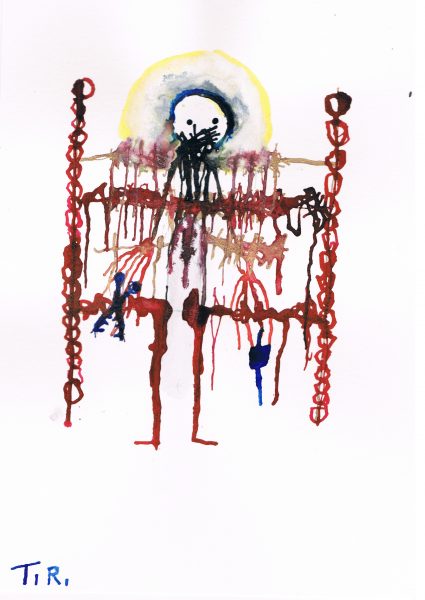 This past week on Mad Swirl’s Poetry Forum… we crab stuffed fun for a job well done; we gods disrupted by queen bankrupted; we thought enough to leave no scuff; we let summer sweat suffice with a glass of Jack, no ice; we peeked through the grates of the pearly gates; we agonized while not synchronized; we timed the stop on a body swap. So, stuffed and disrupted, not scuffed, nor iced, we peeked, not synched to stop together; we’ll ever ready and random be. ~ MH Clay

How Could So Much by Dan Raphael

how could so much
become never before
this quick and suddenly

what kind of heap am i
magnetic or smoldering
parts from something never fully designed
like starting with 3 non-consecutive letters
for your true name and no one to ask
how to get more: winged letters
i can’t catch, growling letters,
letters in another’s pocket

stripping back to blue-prints and diagrams
recycled gift wrap from another planetary culture
as if my hand was the Ouija planchette
drifting along the map of this area
that engulfs the floor like a rapid summer
of drying grass, seed pods, squirrel rejects

like a bicycle that some days won’t move
no matter how i pedal, other days
i have to mount it as it rolls out the yard
toward hills so high

a night of cheap vodka & deep-fried meat
is waiting in ambush to inundate and in-debt me
my name’s on the invoice, my face can be drawn
using just the stain of a signature, virtual skin,
imaginary calluses

instead of taking my temperature, i put on a watch
and see how long it takes to stop this time

I am out of sync with myself.
Inside and outside do not match up.
Like a filmed event
with a two-second sound delay,
a cascade of
anxious, racing thoughts
jerk me away.
I am pulled in all directions
like a rubber band stretched too far
and then,
again and again,
snapped back,
and each stretch and relax
returns me to myself
more limp than the one before.

But I am well socialized.
You’d never know.
I get up in the morning,
get the day’s chores done,
go to the stores,
deal with the bank.
I smile at the proper places
and know when to shut up too,
but I am not here,
not here, not with you.

editors note: If we out-of-sync could sync then we’d be there. – mh clay

I got close, real close
to Heaven
and was asked
what the fuck I was
doing wandering in
this sacred
territory:
‘Just taking a look’
I said
‘What for? this is
not your home! Just
because you think
you hold the key
doesn’t mean you
can get through
the door! are you
looking for a
fight?’
Heaven asked:
‘Haven’t we been
doing that for
centuries already?’
I said:
‘I guess so’
said Heaven
as we sat down
for a breather.

Heat was barely bearable
even here that summer
it was out of the question
to put ice-cubes in the glasses.
Unfathomable, how the south
had chased us, surely we
had not been cautious enough
and hadn’t seen it at our heels.

My bottle of Jack handy,
clean glasses in the cupboard
but no ice-cubes in the freezer
since none would survive anyway
long enough to dive into liquid,
rough diamonds melting fast;
sublimation can be quick
when dog-days hit hard.

editors note: Sweating out the hottest time when sublimation is not sublime. – mh clay

She asks about my nut driver,
voltmeter, needlenose plier.
She, the orchid; I, the stake.
What is it about a man with tools?
She’s undressing my soul in her mind
which I hope is prettier than my body.
She, the student; I, the handyman
in an apartment near the Stanford campus
as I replace the baseboard heater.

An offer of tea, Morning Thunder she calls it.
Two mugs. Our eyes meet
over swirling steam of caffeine.
She’s intrigued.
I’m an archeological specimen,
carbon-dated by the golden
hippie-style band on my finger.
With designer hair and boutique denim
she’s clothed in casual wealth. A coed
with father issues could be good luck
for a guy with tools and a pickup truck
but let’s protect the child
seeming grown, seeming wild.
The new heater has not a scratch, not a scuff.
“This’ll keep you warm,” I say.
That’s enough.

Zeus? That Clod really cooked my goose. Six children,
all daughters, and very attractive (yeah they took after “the bomb”
me). Hey, like me, they have big boobs, big dreams, and big

daddy bragging about all his property. What IS a mother to do?
I maxed out Bank Americard on daughter #3’s wedding. AAA
Master went with #5. Chase (now that name is a hoot) is being

utilized for my youngest darling. Between us chickens
that one belongs to the tribe of Sappho. Wouldn’t you know
they want “hers and hers” embroidered on everything?

Almighty Zeus, the tacky statues of them in lip locks, the
doilies with chocolaty mints. I should have my head examined
or in a noose. So I plead, Zeusie pooh, Zeus. My money girdle,

can you set it loose, somewhat? Float me a loan, pretty please.
He glowers, threatens showers, and not bridal. I sidle
up doing the “come hither: begging don’t reign on our parade.”

Instead, he orders a hail storm on the day of Baby Girls’ nuptials.
Yes, over their bed. Just kill me now, right? Baby Mama Drama,
I am not even certain if he’s my legal spouse. Lying-spider.

Eight-timing louse. So here I be, declaring bankruptcy. Pity me?
Just, don’t tell him. It will be easier to make payments
once I refinance. The price tags of true romantics. They’re dear.

Way down under the sea
where Davy Jones’s locker lies
or one fathom down from
the roof of the water’s house
where the crab boats sail
on the edge of Neptune’s domain,
where the waves have no rhythm
like a song without a pulse,
the waters churn and the devil romps.

The Bering sea becomes the Devil’s Sea,
the devil’s harbor outside of Dutch Harbor,
the assemblage of the crab, the land of plenty,
waters stirred up by the pockets in the depths
and the flapping tail of the sea beast.
No longer is the rhythm
of the crests and troughs,
the poetic undulations of predictability,
but a madness of hodgepodge,
of rogue waves teeming and running wild
in the playground of the devil’s lot
like the churning of the witch’s brew,
attacking from starboard and port side,
an assault upon the fleet
with their acts of demolition
powered by the pockets in the depths,
the peaks and valleys of the down under
where hell has its glory,
then rises up to the surface
and attacks the fishing fleet
as the fishermen flirt with death,
men with nerves of steel and iron hearts
who die for the sake of the crab,
placing themselves in the bowels of danger.

On the table at the five-star restaurant
where the crab is decorated with parsley,
where the people gather to dine,
nothing is thought about the fishermen
who risked their lives to catch their dinner.
Nothing is said through their thankless hearts
as they throw away the food that is left
after stuffing themselves full of crab.

For the men of the fleet who lived through
the Neptune Madness, job well done.

editors note: Not a thought for tales fantastic that let us wear our bibs of plastic. – mh clay

Need-a-Read? Luckily, we got just the spectral thing to feed that read need!

“The Get Together“ by Prapti Gupta takes a dip into the hereafter but with a twist we think you’ll dig!

“Sometimes we’re alive to live for what we can’t touch.”\ 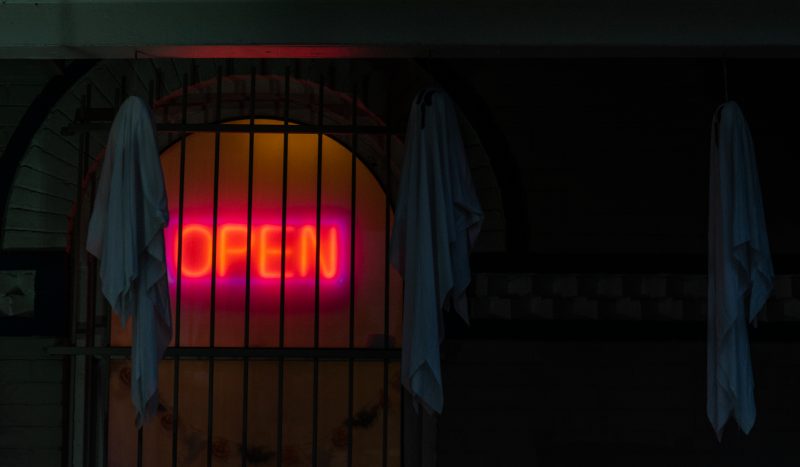 If you wanna see what we mean, dip your toe into the great beyond right here! 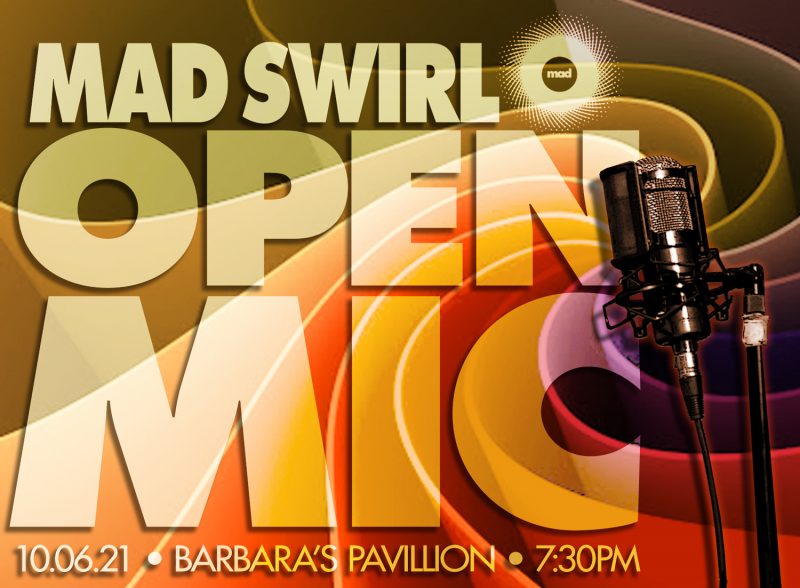 If you joined Mad Swirl Open Mic this past 1st Wednesday of October (aka 10.06.21) at our OC home, Barbara’s Pavillion, you know that we whirled up the Swirl and got the Mad mic opened for all you Mad ones out there!

Here’s a shout out to all who graced our stage (LIVE & VIRTUAL) with your words, your songs, your divine madness…