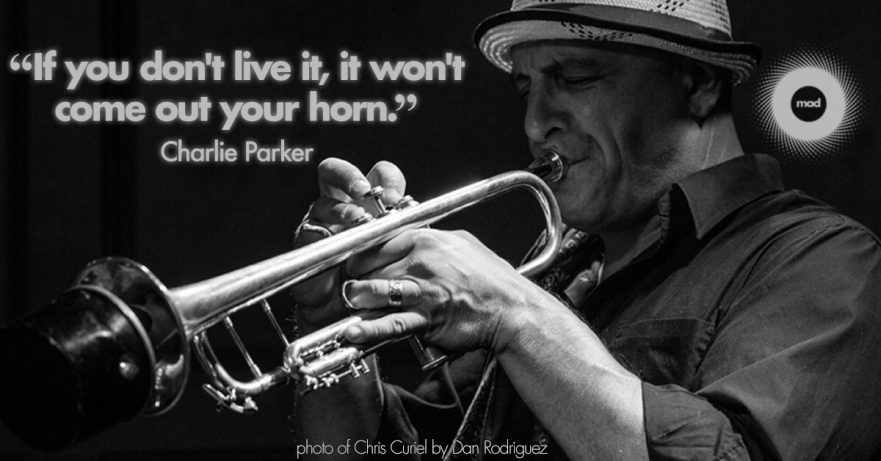 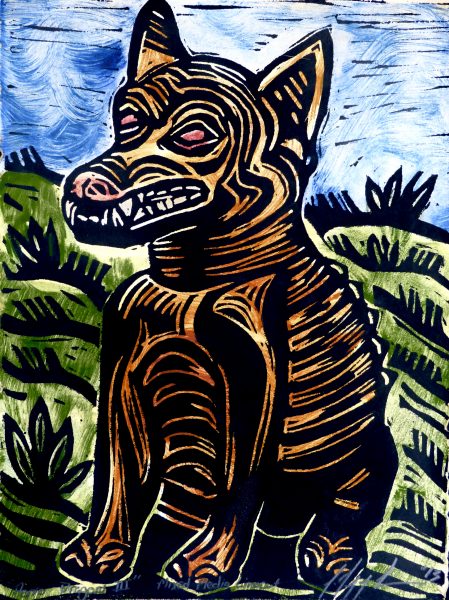 To see all of J Gregory’s’s simply complex canvases, as well as our other former featured artists (over 50 in total), take a virtual stroll thru Mad Swirl’s Mad Gallery!

This past week on Mad Swirl’s Poetry Forum… we watched a fool play pocket pool; we feathered a nest with a memory test; we saw, heard, spoke none, evil shot with loaded gun; we sought selfish gain with our right to complain; we prophesied to entitled choosers, turned them into freedom losers; we found the place where X is marked, with map in hand we then embarked; we met her there twixt dream and death, not ready yet for dying breath. So many more we mean to write, so many things to bring to light. ~ MH Clay

The last few years were strange.
I don’t remember seeing her in anything but
a flannel nightgown.
Always in bed, reading,
or on the way there. Slowly, with many fits and starts
her reality was flaying away
thinning the border between here
and what she lived in dream. Everything
took on the shine of the unreal,
dream crowding in to take over.
I’d visit, stepping through a door that was like breaching a membrane
and I was in her dream world,
like neither of us was quite tethered in reality.
It unnerved me then.
I didn’t understand why she was in such a hurry to go, but
it’s happening to me now and I
find great comfort in being in the place
that I once unwillingly shared with her so long ago,
even while I’m frightened of what looms next.
I’m not done.

editors note: Haunted by our dead, we live as ghosts to them. – mh clay

Take this and go
with a stabbing of your own

There’s a mark already set across
the eternity you pursue

Take that tattered notice and go

Take an X to eternity go

Track marks across your Everafter
to keep it intact

Tools of the Prophets by Devorah Titunik

They believe they are fighting for freedom.
Patriots ready to lay down their lives
To rescue us from the tyranny of
Things like wearing masks.

They gather around their computer screens
To solve the enigmatic clues of prophecy.

They gather around their television screens
To hear and absorb the prophets’ warnings of the
Doom ahead if they can’t stop the changing tide.

They are certain that their god
Ordained that the white man rule.

They will fight to the death to save us
From the dangers of diversity and
Socialism conspiring to displace them.

They pray for the military coup that will
Take over and return the chosen one
To the White House.

And if they were to succeed, they would learn
What true tyranny is like under fascist rule
And realize they were just tools of the prophets
Whose true purpose was to aid them in their
Escape from freedom.

editors note: These prophets prophesy for profit; theirs, not yours. – mh clay

TO WHOM IT MAY CONCERN by Arif Ahmad

I, me, my, mine
is my predicament
honest, stripped
this is who I am
I can’t help it
I am such programmed
thus
disrespected, discounted
bounced around
used for granted
I refuse to realize
the advantage of many
over a few
ever a person
never a nation
then I complain

editors note: Oof! So many; more so now than ever. (Congratulations to Arif! He has a new collection out titled, “A Piece of Me.” You can get your copy on Amazon.) – mh clay

The Monkey with the Gun by Jon Bennett

There were 3 monkeys
and one of them couldn’t see
although sometimes
he’d pull down his blindfold
just as the one wearing earplugs
occasionally popped one out
The really sick monkey
with tracheal cancer
could, in a pinch,
use his electric voice box
But these three monkeys
often didn’t like
what they heard
or saw
so when they spoke
it was usually to tell someone,
“Shut up!”
If that didn’t work
there was always the 4th monkey
the one with the gun
and the delete key.

editors note: A fourth, for when evil persists. (We welcome Jon to our crazy congress of Contributing Poets with this submission. Read more of his madness on his new page – check it out.) – mh clay

Many years ago
The place was an abyss
Then the fluid lava
Overflooded it
And the time chronicles
Made it even.
Mended pieces of history—
A mixture of proofs and mendacity
Which grains refused the sieve of refinement.
Living between concave and convex,
Now—a reason
For broken bills.

editors note: No feathers, no fly; no lie. – mh clay

Laying Over in SEATAC by Sharon O’Callaghan Shero

I sincerely wished he would leave soon

And yet, I was quite curious for the outcome

editors note: There’s more than one way to get a charge. – mh clay

If you Need-a-Read, wake up and get you some “Living the Dream“ by Contributing Writer & Poet, Bruce Mundhenke.

“We’re here now as we are, but soon, you’ll still be you and nothing around you will be yours, not even your own body or mind.”

Here’s a bit of Bruce’s tale of pasts and futures all colliding and dying at once: 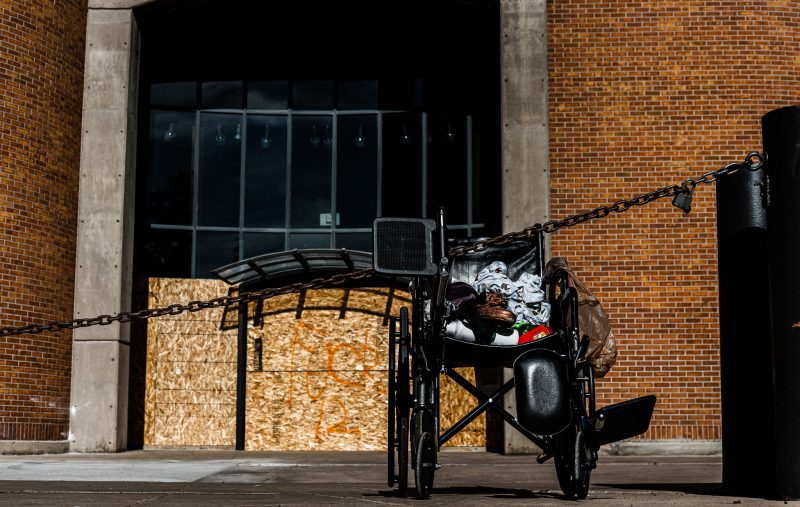 (photo “Rolled to a Halt” by Tyler Malone)

I once worked as the night shift charge nurse for Oak Street Care Center. The hospital where I worked prior to that went bankrupt. So I took the job at the Care Center, a skilled nursing home in my own town. I had been nursing for 13 years by then. In that time I had seen a lot of changes that were making my job more stressful, including the nurse to patient ratio getting worse, an increase in paperwork, computer systems that tied nurses to the desk.

Shifts were 7 PM to 7 AM. I had 42 patients, one entire hall and half of another hall. The other nurse on night shift also had a hall and half of another, with about the same number of patients. We had four nursing assistants, or CNAs. We were expected to keep the residents safe. This was no easy task when many of them had Alzheimer’s and were prone to falling. The evening med pass was huge. I also had a lot of scheduled meds to pass out in the morning.

First on my med pass was Ida. She was in her 80s and had mild dementia. Her friend Leon was nearly always in her room. He was also in his 80s. They had been lovers when younger. Leon would take her out to eat and for car rides. He told me stories about his boyhood in the Great Depression, life during the second World War, and talked about how the world has changed during his lifetime…

Get the rest of Bruce’s recollection right here. 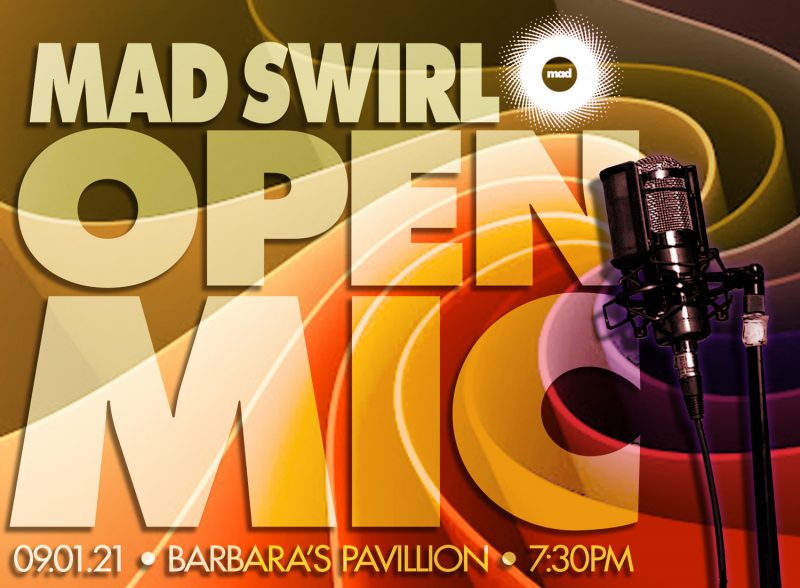 Join Mad Swirl this 1st Wednesday of September (aka 09.01.21) when we’ll once again be doin’ the open mic voodoo that we do do at our new home, BARBARA’S PAVILLION!