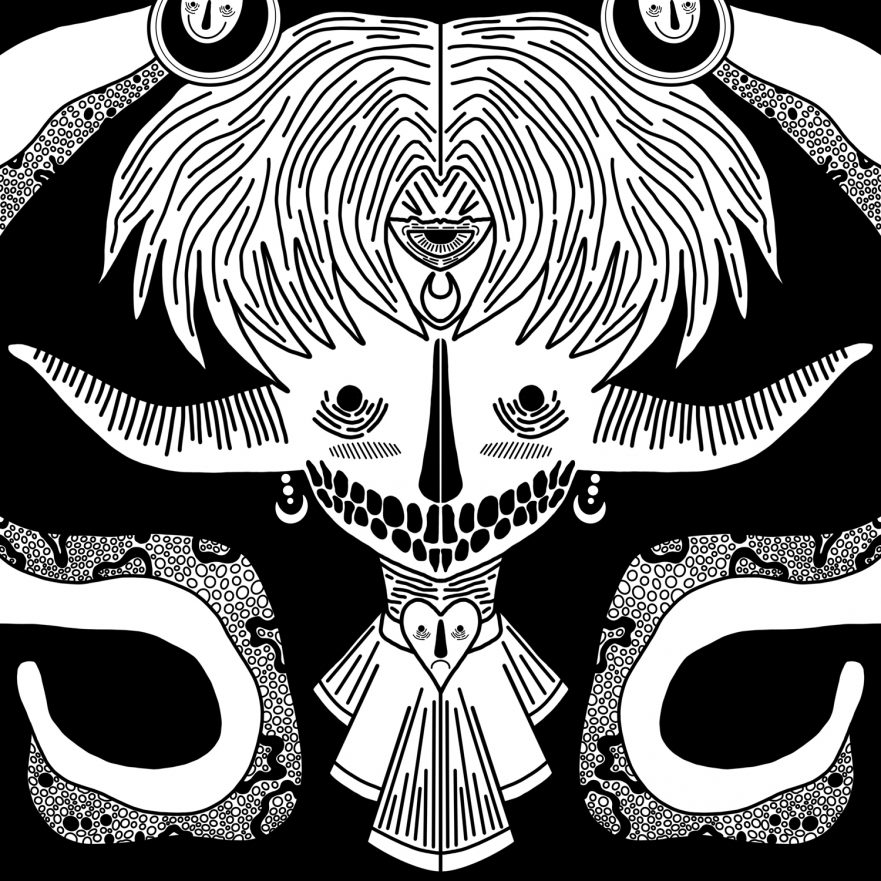 “Blessed are they who see beautiful things in humble places where other people see nothing.” 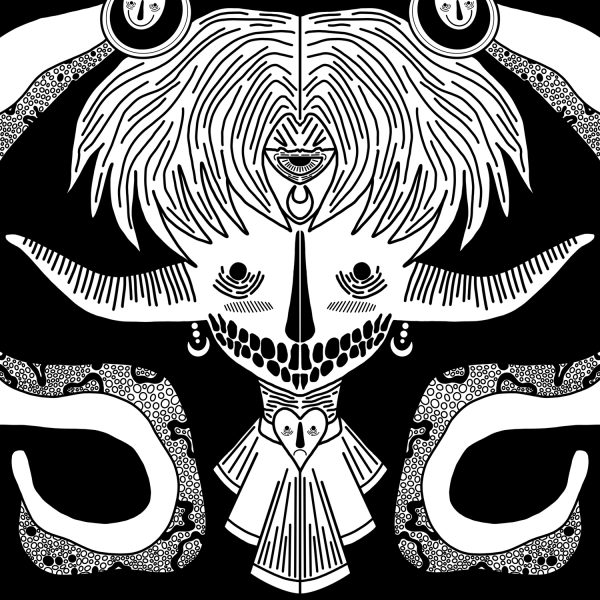 To see all of Bleak Teeth’s gritty and creepy (yet oh so attractive) cast of characters, as well as our other former featured artists (over 50 in total), take a virtual stroll thru Mad Swirl’s Mad Gallery!

This past week on Mad Swirl’s Poetry Forum… we went reminiscing on strip mall living; we watched an old whiz at the suicide quiz; we gave up the gloom at another damn Zoom; we scienced the scheme of a number dream; we bended a save on a catenary wave; we found love serene in a Hopper scene; we ended affairs with musical chairs. Upward and on, we darken and dawn. ~ MH Clay

Sharing A Seat With My Own Initials by Tyler Malone

Goddamn walls have ears, bar tables have heard us all say
as others ordained as bartenders clean for us, sit and exist
to trace prints on glass as air fills their sequence in patterns
we hope others don’t call our personality.

Dip tongues into etches on your palms, say no one’s ever been here before.
But there are cuts and a dried drink eyes, both looking and listening
to dates when she orders beer and he orders a dirty martini,
two goddamn words that don’t go together—martini/dirty,
filthy/nachos, proud/cop, moldy/toothbrush, broken/cookies, dead/dog.

Those daters, looking at their table, ask, “Can you clean this up?!”

Inches above ground, we demand comfort but that doesn’t mean clean.
With where our bodies have been, we need acidic volcanic bleach
so wood smells of hospital tools, splinters as scalpels for elbows.

Lips to lips, sips between bites, how many times has I hate my life,
I love you, or I hate that I love you been echoed in glass held up
to faces with no dimples to kiss as the best has already been said.

Except others have been here, that’s a messy comfortable necessity.

Hell is filled with denial and there will be no new comforts
from our world, our circle growing sand and water. Our table.
Our us at the tip of a knife carving initials into moments
as we hold nothing but drinks and bones.

But there can be more. Take a seat.

See others have sat here before, and maybe they’ll be back
to share differences between a hand and the knife and the words
left behind on a table grown from earth’s dirt
to hold a single moment for as long as it’s dead.

the truth, but only when it’s no longer enough by John Sweet

or if the room is empty, or if it
holds the breath of uneasy ghosts

if the walls are deep blue and sunlit

we will exist here
in hopper’s silence

we will sit next to dusty windows
from some other century

a view of what, though?

not cities and not water

an expanse of manicured lawn?

yes, and then the interstate
beyond it, but empty

there’s been a tragedy

we are in love

this, at least,
is a comfort

editors note: What end is enough when viewed from your lover’s arms? – mh clay

wake up wet
head slung low, and stalking
a bolt of lightning
down the line
digging deep into tufts
of synthesized light
pumping ozone
into carbureted freedom
get with it man
no, i don’t
and i don’t
and then, i do
a catenary wave
progress, regression
these quickening exhibitions of lost control
to play and slay
a car on the railroad
chain of life

editors note: With each of us a languorous link in the chain. – mh clay

the dream of the number by J. D. Nelson

editors note: An unbalanced equation in the search for anderson. – mh clay

Persuasive as a Pentecostal preacher,
the dark-haired man with a tranquilizing
voice and hypnotic green eyes speaks first.
They follow me in unmarked police cars.
Signal strangers on the street to mess
with me and manipulate my mind.
There’s a knock on the car window.
Honey, Henry just hit a home run.

His face distorts and disappears,
replaced by a frizzy redhead.
The black ops broke into my house
and implanted a microchip in my skin
like my vet did with my Dalmatian.
They harass me with lasers and loud
noise. A voice blares: Manager on
Aisle 10. Sorry, she says, That’s me.

The screen goes dark and a gray
and wrinkled woman whispers:
They spy on me with motion
lights and watch me as I sleep.
They sneak in and sprinkle
cyanide in my salt shakers.
A silhouette saunters across the screen.
Mother, have you taken your meds?

A teenager in a nose ring and tattoos
articulates like an anchor on ABC.
The CIA decapitated my entire family
including my grandma. I escaped
from their mind control camp today.
One or all of you could be one of them.
A girly girl grabs the mike: Get off
my laptop or I’ll tell Mom and Dad.

The cameras continue to film
fresh faced followers feeding
on the frenzy of the internet
conspiracy cult, convincing
them to ditch drugs and doctors
to listen to voices on the web
repeating the same rhetoric
as the voices in their head.

editors note: And keep it on mute when you’re not talking. – mh clay

WATCHING AN OLD INTERVIEW WITH ANNE SEXTON ON YOUTUBE by Ruth Z. Deming

They quiz her, the two bards, as if she is a liar, her
suicidal ideation fascinates them, cigarette smoke
swirls toward the ceiling and she wears a sundress with
patterns like Picasso. She reads her famous poems,
pushing up her eyeglasses. In one, she was too ill
with madness to take care of her daughter. Suicide always
on the runway like Burt Parks and his Miss America Pageant.
Jump! No, she will not jump.
Pills! No, she will not die of pills.
It’s the terrible “locked in the garage” till you die.
She, blackened, like the burnt pancakes in the griddle.

editors note: We can choose how we go, but not how we’re remembered. – mh clay

An Easter Poem in Irwin, Pennsylvania by John Dorsey

we’d claw at each other
the closer we got

where we had lived
like yellow chicks squawking
in plastic baskets

the air still cool
the world went quiet
in the back
of a ford escort.

editors note: Training for life as the pious public in America. – mh clay

If “Need-a-Read” then put down that remote and tune on into “Black and White TV with the Sound Turned Low“ by Contributing Writer & Poet Anthony Ward!

“Entertained to death, that’s how we’re all going to live out our days, all through the days and colors of others.”

Here’s a tee-vee scene to get your read goin’: 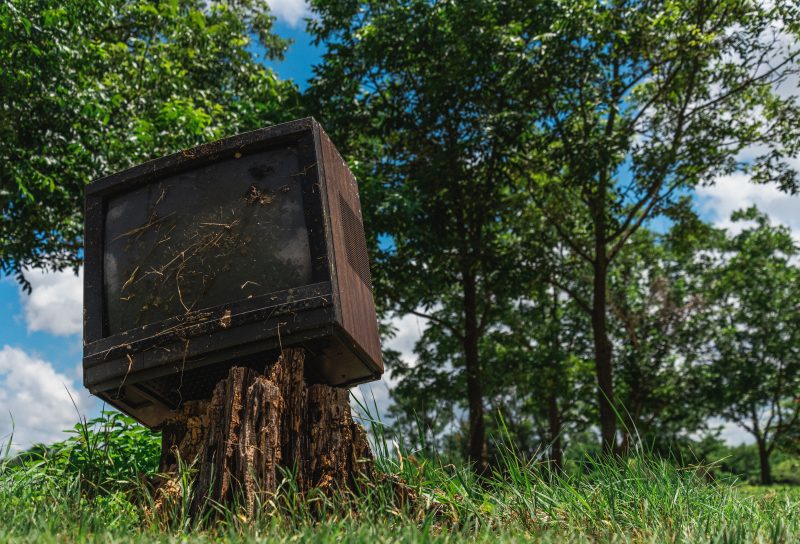 (photo “Black and White, Green on Blue“ by Tyler Malone)

My uncle Charlie only ever saw things in black and white. He had never owned a colour TV. He said the colour TV license was far too dear. I didn’t even know anyone still believed in that shit. Was there such a thing as a black and white TV license in this day and age?
“Black and white’s better,” he’d say. “People spoke better. They behaved better. Dressed better. Things were much more understandable.”
To me his TV resembled an engorged mosquito that had sucked too much blood and was about to burst. TVs nowadays are all flat. Like a picture. His had buttons like a tailored suit. There wasn’t even a remote control.
“Who needs a remote control? Makes everyone lazy. Sitting there scrolling through thousands of channels and still finding nothing to watch.”…
Don’t you change channels yet! Get the rest of this boob-tube read on right here! 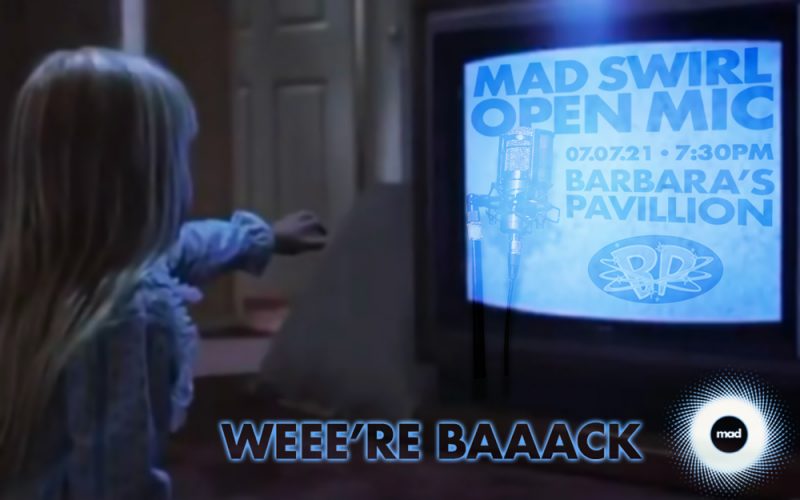 If you joined Mad Swirl Open Mic this past 1st Wednesday of July (aka 07.07.21) at our NEW HOME, Barbara’s Pavillion, you know that we whirled up the Swirl and got the Mad mic opened for all you Mad ones out there!

Here’s a shout out to all who graced our stage (AND Zoom room) with your words, your songs, your divine madness…