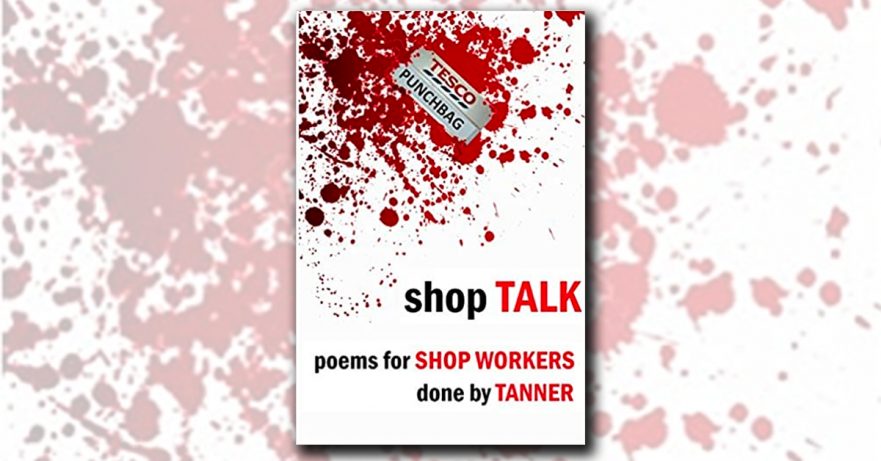 Paul Tanner’s book, Shop Talk, comes at you directly. It’s safe to assume that the writer of these poems either works in a shop or has worked in a shop. From here on in I’m going to refer to the writer as Tanner.

Having dealt with people directly, working as a doorman, a counter person at a deli, and even on the retail floor of a computer store, I know people can really suck. But I’ve never written about these experiences. Tanner’s poems are often funny, but they are biting too. Any job that makes you face the public, without barriers, is like being a piece of meat in waters swarming with sharks. It’s best to bite first.

In one of the opening poems, “What You Want,” Tanner writes:

It must be bad, he says, working on boxing day?

I don’t say anything. I carry on scanning his shit.

I’d hate it, he says, working in retail
at this time of year.

I don’t say anything. I carry on scanning his shit.

Then again, he says, leaning in nice and close,
I suppose it must be bad any time of the year,
mustn’t it?
and he smiles

so I give him what he wants:
I tell him:
only when I have to serve
bored cunts like you,

and his smile stays there
as he asks for the manager:

Tanner’s voice is believable. And, even if you or I don’t have the courage to slap some asshole down like that, we celebrate his victory. Let’s face it, that guy was poking at Tanner; he should have known better. It’s like he got his finger caught in a mousetrap that he laid out.

It’s the small victories that Tanner describes for us in his everyday scenes of working, facing the hoi polloi in all of its stupidity. In “THE LUXURY OF BEING A VICTIM,” Tanner is a citizen vigilante, kicking ass for all of us who have to suffer fools. Tanner is the Lorax for the workers. He speaks for those who have to put up with crap on a daily basis. And he acts. (After only a few pages in, I deduced Tanner was fired several times.):

I told them that will be twelve quid, please.

He held out a note.

I went to take it off him –

he pulled his hand back –

missed! he laughed.
his girlfriend laughed too.

you want it? he dangled it in front of me.

I reached for it again –

gotcha! he snatched it away again –
and ha ha ha, he laughed.

walk out without paying, I said.
see what happens.

I was only messing, he said.

yeah, he was only messing! she said.

here, he held the note out, take it!

I took the note while she took the vodka bottles.

eight pounds change, I held it out.

he reached for it –

they were so offended
that they made a complaint

which offended me,
but offence
is a luxury
I can’t afford,
unlike
a grossly
overweight
unemployed
alcoholic
couple
who take the piss out of
minimum wage taxpayers
then try to get them fired –

Pen in one hand, Tanner’s other hand is tightly closed, balled up, and ready to punch. He’s an even more pissed-off English Bukowski, often unshaven, not really giving too much of a fuck.

Years ago, I worked at a fancy Swedish restaurant-deli in Manhattan. They served Swedish meatballs, limpa bread, herring, and a lot of specialty Nordic hams, meats, and salads. It being about 1986, the deli serviced a thriving Swedish and German population, which has since evacuated that neighborhood on the Upper East Side.

One quiet summer night, one of my co-workers pushed a chunk of Black Forest ham too close to the spinning blade and it lopped her finger off. Immediately, pandemonium broke out at the deli. While Johan, the manager, smartly packed up the chopped-off finger to take to the hospital, another coworker tried to keep her calm. During all this, a customer came to the counter. I was trying to evenly deal with the situation. “Can I have half a pound of Swedish ham?” the man in a suit shouted across the counter. He was clearly drunk. Preoccupied with what was going on behind me, I stared silently back. “I SAID CAN I HAVE A POUND OF SWEDISH HAM.” “Sir, maybe you can wait a few minutes,” I said. “We’ve had an issue here.” The man grumbled, slamming his fist on the counter. I didn’t know what to do. He shouted again. “I SAID CAN I HAVE A POUND OF SWEDISH HAM,” he yelled, even more loudly this time, waving a twenty-dollar bill at me. Like I was a topless dancer. Not knowing what to do, I went to the refrigerator, grabbed the Swedish Ham, and brought it over to the blade which still had a little splash of human blood on it, spilled out from a severed finger. I hesitated. “NOW, I SAID.” I shoved the heft of Swedish Ham on the blade and sliced the meat, shaking my head the whole time. Then I handed him his order feeling like I’d done something terrible.

My point is, I know what a jerk is like and how they make you not give a fuck.

In the poem below, “BEAUTIFUL AND FECKLESS,” Tanner describes another customer confrontation that went south fast:

the customer said my stubble was off-putting.

the next time he saw me I’d shaved,
but he still wasn’t happy:
broken out a bit, he said,
pointing at my spotty neck,
haven’t you?

the next time he said my teeth were quite yellow.

time after that
he suggested I was quite below average height,
wasn’t I?
and
at this point
I’d started to have enough, I mean,
if my appearance was so offensive to him
then why did he keep joining my queue?

so the next time he came in
and started telling me my hair was a bit loud,
or some other visual crime I was guilty of,
I asked him: does it work?

does what work? he asked me,
so I spelt it out for him:

does insulting a shop worker’s appearance
make your dick any bigger?

given the amount of criticism he’d dished out,
I thought he could take this tiny scrap
of constructive banter,
that it might inspire him
to join another queue next time
and save himself the torture of having to look at me,
to move on with his life,
move on from me
and all my apparent warts and all

but I was dragged into the office,
where management told me
I “sexually molested him” with my words,
and I was lucky he wasn’t suing,
I was lucky he only made a complaint,
that I was obviously hypersensitive
and not cut out for
dealing with people, and furthermore –

well, I don’t know what more they said after that
because I walked out

I had arrived:
I was finally
as beautiful and feckless
as the town centre rabble.

But here Tanner finds polity among the rabble. In a sense, we, the readers of Tanner’s poems, are the silent rabble. We are the unshaven, the ill-spoken to, and the pissed off. As I am reading the poems, I’m thinking, “go get ’em Tanner!” Punch him in the nose. Step on his toes. Do it in rhyme. Then serve him some green eggs and bloodied ham. Fuck ’em. Don’t they know any better?

And I love Tanner’s war on shopping. Don’t go shopping, suggests Tanner in “SHOPS ARE FOR SHOPPING:”

if you don’t like the price,
don’t buy it.

if you don’t like the bag charge,
bring your own bag.

if you parked on a double yellow,
move your car.

if you need sympathy,
see a shrink.

if you have a story to tell,
write it down.

if you want someone to laugh at your jokes,
go on stage.

if you want a fight,
take up boxing.

if you’re in a rush,
if you have somewhere else to be,
or something else to do,
for the love of god,
don’t go shopping

that’s not shopping,
that’s taking your shit life out
on someone who can’t answer back

and finally
if you’re concerned about unemployment
stop trying to get shopworkers disciplined
for not indulging you
in all of these frustrations and insecurities
under the vague umbrella term
of ‘bad customer service’
ok?

because pretty soon
there’ll only be those
self-service machines left
and we know how much
you all hate them:

after all,
you can’t pass
your endless and varied
miseries
onto a robot,
can you?

And yeah, the poem is funny. I love the vengeance. But he also makes a point. In the end, we won’t have a shop person to abuse anymore. Imagine that, fucked up people of the world. Who will you pee on when robots have taken over shop clerk jobs? Will you have to roam the streets and randomly scream at walkers by? Hopefully, you won’t go home and kick the dog. But maybe you already do.

Go get yourself a copy of Shop Talk. Revel in reading about assholes getting their due. I hope you’ve never been the abuser, but if you have, maybe you’ll feel some remorse and rethink your behavior going forward. If you’ve been an abused shop clerk, here’s a chance to read your personal Batman’s revenge on the shitheads of the world.