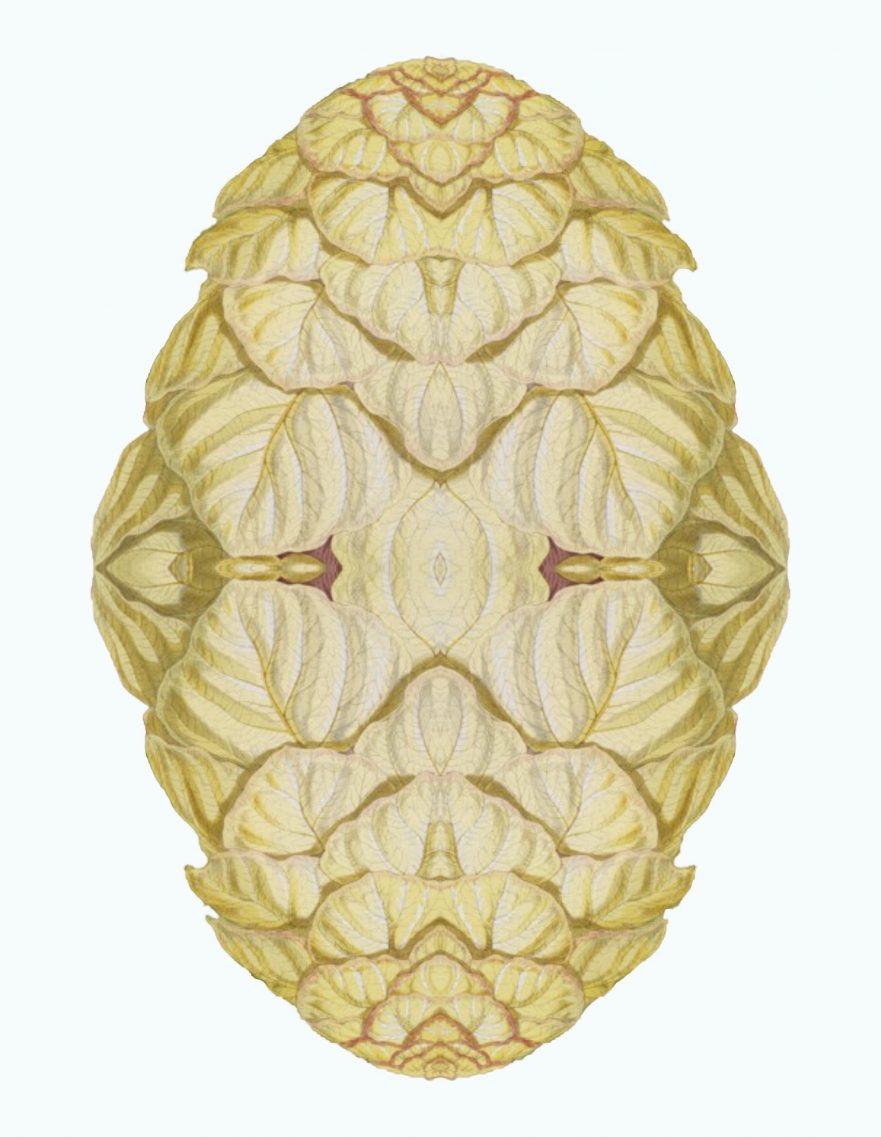 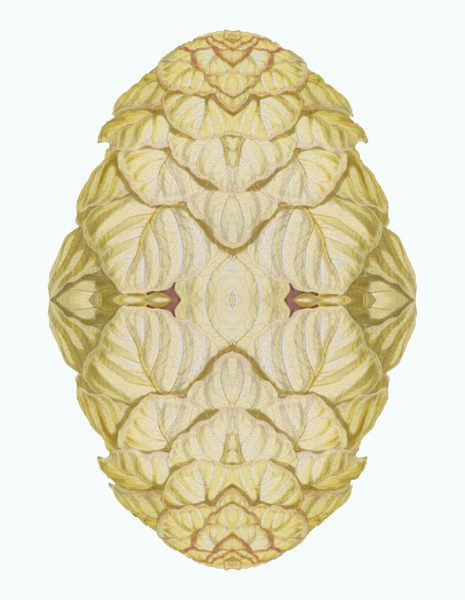 “The Litany of Deceptions” – Bill Wolak

With this one we say “‘til we again” for Bill’s feature run. But don’t you fret, stay tuned for our next featured artist coming soon!

See all of Bill’s wild and hallucinated canvases, as well as our other former featured artists (50 in total) at Mad Swirl’s Mad Gallery!

This last week in Mad Swirl’s Poetry Forum… we told no truth, but neither lies to a bearded man with blazing eyes; we got the straight scoop from a prophet of poop; we crossed planetary lines with universal designs; we saw rock breakers as blame takers; we sought repose in new soul clothes; we got a wish primer from a moon dream climber; we stirred the syntax game as reality became. Our ordered ideas ideally tweak our order. Pick up pieces, start again. ~ MH Clay

THAT WHICH IS IMAGINED by satnrose

They hang on the mind’s rack,
these ideas of self,
like coats in assorted sizes and brands,
to be tried on for texture and for fit.
It takes a lifetime to decide
which is which, right or wrong,
and too many years have come and gone
while the body tries these garments on–
outerwear for the inner soul.
But be prepared to be controlled
by an extra layer of skin to mold
your every groove, to wrap around
your every move.
Every action is subdued,
down to its hair-root thought.
And once bought and paid for
with your life, there is no return.
Though you’ll stand in long lines.
Though your mind will yearn for its lost treasures.
Though your body will burn for its stolen pleasures.
Every minute of your life will have been measured
by how worse you are for the wear.

TO BLAME by Mark Senkus

time is busy making room
only for itself

even the rocks won’t survive our bombs

but for now we have some time

rocks are known to break
but never to heal

their heaviness is an unfinished
grieving

we cannot blame the world
for being the world

we only have ourselves
for that

editors note: No more rocks? No more us. None left to blame… – mh clay

Summer will come by Iulia Gherghei

Apparently all is well
Under a rock, in the shades, death is laughing its ugly teeth off
So soon she’ll rule again
So soon its grin will smear the skies with gray clouds
Heavy to breathe, the chest will rest
Life will exit left
The heartbeat will be postponed

editors note: Meanwhile, on this planet, we hope to rise, come Fall. (We welcome Iulia to our crazy congress of Contributing Poets with this submission. Read more of her madness on her new page – check it out.) – mh clay

Do not self-isolate! (your house or your mind) by Frank Phelan

From cave to shack to shanty
Luscious forest canopy
Humble abode, tenement slum
Brazilian hillside favelas
60’s high-rise, urban sprawl
90’s, noughties boom and bust
from all of this
our shelters from the storm evolve.

Hearth, once open,
invites only isolation in for tea –
where gadgets talk to satellites
that talk to family.
And strangers alike.
A world of breathless talkers, texters
connected, whatever.
Deaf to each other.

We have retreated inside
tongues tied by stigma,
cut adrift on a commode
of festering demons,
eyes blind
to the interconnectedness of a toilet pot;
that hub of revelation
where popes and poets
politicians and paupers
and the rest of the worst
and the best of us
unload
the burden of stature or status,
succumb to the true nature of things
and come to understand
the great leveler of a toilet lid
in the upright position.

editors note: As you open your eyes to this, you might want to hold your nose. – mh clay

The Magic Theater in Somerville by Marianne Szlyk

The first time I saw
the man with the wispy
beard and the flapping silk
jacket, he was coming out
of Healthway Foods with a
chalky carob bar
in his pocket.

Of course,
I did not tell him
the truth. I feared he
would discern it, his eyes
and accent blazing.

The last time I saw
him, he was clean-shaven
and had cut off his pigtail.
I remember advice he gave,
having seen me walk
afternoons away from school.

I thanked him.
We moved on. He would
stay near this magic city.
I would not.

If I saw him now – no
longer the little sister, I
wouldn’t tell him the truth.

Here’s what Short Story Editor Tyler Malone has to say about this weekend pick-of-the-week:

Here’s a bite of “The Happy Couple“ to get your read goin: 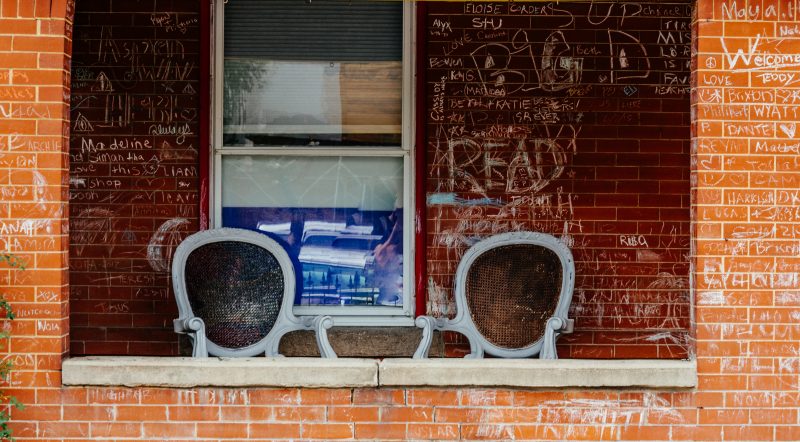 (photo “Seat in Hell for Two” by Tyler Malone)

Everything began when the larger dog attacked the beagle and drew a six-inch bloody gash across its side.

Nick rushed to his dog, picked it up gently and carried it to the porch where the old man sat reading the newspaper. “Can you give me a ride to the vet?” he asked. Before the old man could answer, he added, “But first I got to take care of some business. Their dog attacked mine－” He pointed to the man and woman sitting on the porch on the other side of the old man’s home. “It was their dog and I’m going to hurt it.”

The old man stood, wiped his left hand through his thick mane of gray, put his hand on Nick’s shoulder and said, “No need. Not right now anyway. Go in and get an old towel. My wife will help you. We’ll bundle him up and then get him to the vet.”

When Nick entered the house, the old man folded the newspaper and walked over to Tom and Sally, the young couple who were now restraining their dog by its collar. “I’m going to take Nick to the vet,” he said. “We both know he doesn’t have much money so I’m going to pay for this. I’d like to know if you would help out. It was your dog after all.” He spoke with his eyes attentively on both of them in a soft voice, but there was a surge of electricity that came out with his words. “I know you don’t have much either, so just tell me yes or no and I’ll be on my way.”

Tom immediately answered, “Of course, we will. We’ll pay you a couple hundred next Saturday. That okay?”

“You sure about that?”

The old man paused, began to walk away, turned back towards them and said, “I take a promise seriously. If you break it, I want you to know there will be consequences.”…

Will there be consequences? Only if you don’t finish what you started right here!

We all got needs. Some of us Need-a-Read & we think “Working Woman’s Wife“ by Walt Giersbach will feed that need perfectly!

“Times are a-changin’. Times, like a diaper, need a-changin’, too.”

Here’s a bit to get your need teased: 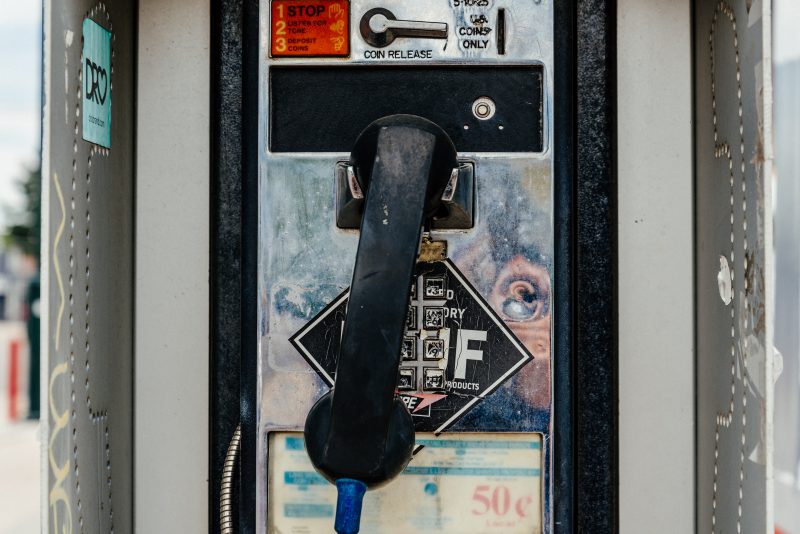 (photo “Waiting for an Answer” by Tyler Malone)

I couldn’t get rid of the vendor on line 1, there was a call still hanging on line 2, I was ten minutes late for a conference call from Tokyo, and the senior VP was tapping his foot in my doorway. Worse, I had just spilled a four-dollar latte on my white Ralph Lauren skirt.

“Just a minute!” I shouted at the SVP, “Goodbye!” I screamed at the vendor, and “Wait!” I demanded of the caller on 2.

“You should have worn a beige skirt to match your coffee,” the SVP snorted. “See me when you calm down.”

“What is it this time?” I demanded of line 2. My husband, David, on 2, was patient. He didn’t deserve my animosity, but he happened to be in the line of fire. Collateral damage.

“Well, the babysitter called,” he said. “Jamie fell down and whacked his head, there’s no more formula and the smoke alarm is going off.”

“That’s all!” I screamed. “I work ten-hour days, my boss is telling me to get on a plane to Atlanta tomorrow, and I still have to make dinner when I get home. I haven’t had time to wipe my butt.”

That did it. I threw the telephone, which bounced back and hit me in the knee. “I need a wife,” I cried, and put my head in my hands.

That night I broke down in tears again. “What are we doing, David? Where is this all heading? At this rate, we’ll be toast before we’re forty.”…

Get the rest of this progressive read right here.