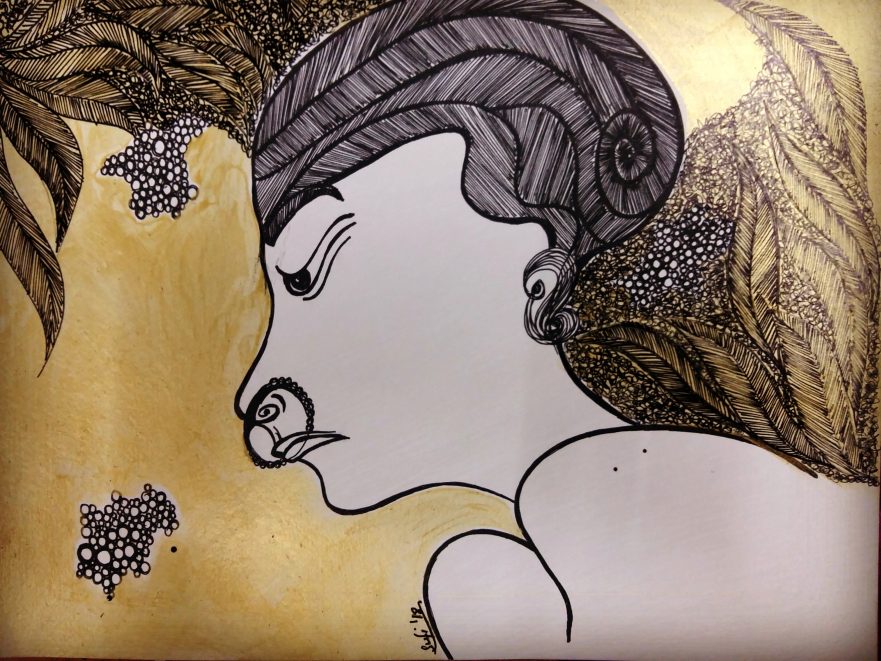 “You shall know the truth, and the truth shall make you mad.” 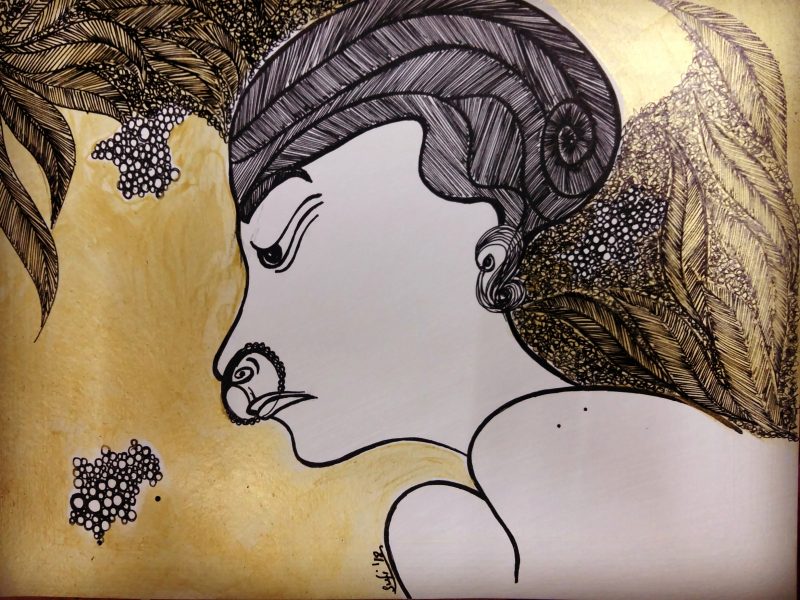 This ends Sufia’s featured run in our Mad Gallery. But don’t worry, we have more art coming your way next week! Stay tuned…

See all of Sufia’s ponderous paintings, as well as our other former featured artists (50 in total) at Mad Swirl’s Mad Gallery!

This last week in Mad Swirl’s Poetry Forum… we considered a call to knock heads on the wall; we watched a sky wrangler, a mid-air dangler; we launched a plot for an ape-stronaut; we tendered a toss in the search before loss; we came all apart, found entropy in art; we sought what’s appealing in dealing with feelings; we bullies demolished with poetry polish. Our words are wrought for all occasions. ~ MH Clay

Getting Back at the Bullies of Junior High by Paul Hostovsky

as typos. Why I oughta
delete you once and for all with one
stab of my little finger! And maybe I will!
But not before I’m done with you, not before

I’ve had some fun with you at your expense.
This is my turf now. My story. You could say
I’m God here, and you’re… whatever I say you are.
And I say you are nothing but little boldface punc-

tuation marks, come to an unfortunate end, sentenced
to eternity in this poem, which is kicking your butt
by making you the butt of every joke in it.
And I think it’s going to be a very long poem,

and I think it’s going to be published simultaneously
in many languages, and in all the best magazines
with the biggest readerships. And now I’m thinking
it will be the title poem of my next collection,

and also my Collected Works, to be published posthumously,
which I know is a big word for you, so let me tell you
what it means. It means I will be at peace, and you will be
still suffering eternal humiliation in this poem

which between you and me is beginning to bore me now. After all,
I have better things to do than waste my time
with your poem. Maybe I’ll just throw it out with you in it.
Maybe I’ll burn it. How about a little fire, question mark?

But it isn’t over until I say it’s over. And I say
it needs polishing. So go ahead, use your sleeve.
I’m going to sit over here now and take a nap.
It had better be brilliant when I wake up.

It’s not for naught that we’re advised to assimilate even
Cellulose, slowly, aided by water or familiar aerobics.

The rest of us louts, though, given our well-worn grasp of
Collective goings-on, suffer frequent, unwanted dyspepsia.

editors note: With so much to feel these days, emotional antacid would all avail. – mh clay

from “The Woman in an Imaginary Painting” by Tom Montag

Cohesion is a
promise we cannot

keep. Things fly
apart. That is

nature’s way.
Sometimes in our

foolish moments
we think that art

can stop the dis-
integration.

Art can’t start or
stop anything.

See: the paint is
already fading.

The woman
in the painting

is receding to
the farthest edge

of the universe,
or of what

will be left there
when we reach

Ubi Re Vera by Steven Duncan

What is it
to be between
the puckered folds
of aloe leaves
and the solar blue
breeze, which lifts
a healing scent
to the sunburned
face? To sense
the space halfway
from a message?
It’s liminal.
The searching
before the loss.
The answer
before the question
and regret for
ever asking.
If the air in the breeze
formed first
in the aloe root,
surely it is part
of the medicine.
The sun-washed earth
delivers its cure
from the same source
that cursed it.
What is it
to be between
so much vastness?

editors note: Between the blemish and the balm, the curse and the cure, rests the unasked question with our innate need to know. – mh clay

just ignite the lighters,
then exhale the
rush of the thrust.

An orangutan
drunk off of
orange tang,

is then spoon-fed
doses of LSD-25
from Harvard professors
passing government grass.

The space monkey coughs
on the highest of highs,
as everything rushes
to the back of his head,

a new frontier of euphoria
from autoerotic asphyxiation
doping syncopal episodes,
feeling floating faintness
in a fractured orbital
spin around the globe,

then comes crashing down
hard below the earth’s dirt.

MEMORY IN ACROPHOBIA by Nikita Parik

The world at fifteen-hundred-
-plus feet above
sea level is

the shivering underbelly
of a birdling thrown
roughly into air.

At this height, dangling midair,
with the sun poking
at the pupils,

body freezing up
in revolt, something gross
rising in the oesophagus,

comfort of land
many unrealistic airkicks away,
physics changes.

Air becomes water, its waves
pulling at your atoms
in all directions; sky

turns into gravity, sucking
you away from home.
Home is an incomprehensible

dot in a maze of green;
and you, you’re a frozen brain,
cold clay body,

nerves of rust,
fervently praying
for a miracle.

editors note: Acro or Baso; it’s not the height or the fall, but the impact that’s a bitch. – mh clay

If I am so smart, why
am I so stupid
or is it more
in that category of
crazy
when you think
if you only do that thing
one more time,
one more time,
it
will
change

editors note: Because, maybe it will, maybe… – mh clay

If you’re cruisin’ for a read ride, this week’s Need-a-Read, “The Chryslersaurus“ from Contributing Writer, Bruce Mundhenke, just might get you revvin’!

Here’s what Short Story Editor Tyler Malone has to say about this pick-of-the-week:

“Extinction is exhausting. Crawl from an apocalypse and live in pieces if you have to, but live.”

Here’s a few choice words to get your read need in gear: 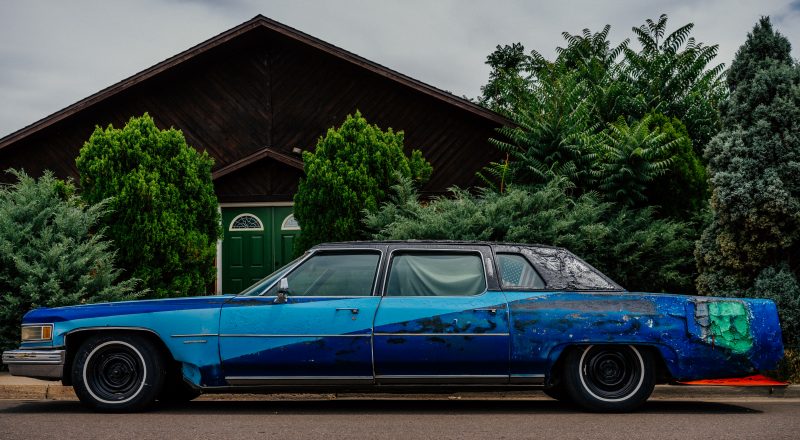 (photo “The Beast!” by Tyler Malone)

If inanimate objects could talk, imagine the stories that would be told. When I was going to nursing school to become an RN and avoid starving to death, I bought a 1970 Chrysler. It was 28 years old when I bought it. It was a huge car. It burned a lot of gas and the heater didn’t always work as good as it should, but it ran good and there were no car payments.

My friends and acquaintances often made fun of it. Sometimes I did too. It was a big dinosaur of a car. I called it The Chryslersaurus. I drove it 20 miles to school, from there to work, and then home again almost every day for two years, until I got out of nursing school.

When I graduated from nursing school, I was hired as an RN at the hospital I worked at while going to school. By that time, the Chryslersaurus needed new tires and driving 20 miles to work each day with rising gas prices was not very practical. I bought a brand new Ford Escort. I also bought a plastic yellow for sale sign, wrote $500 on it, placed it on the windshield, and parked the Cryslersaurus out in front of our house…

Vroom that mouse of yours right here get the rest of this read on.