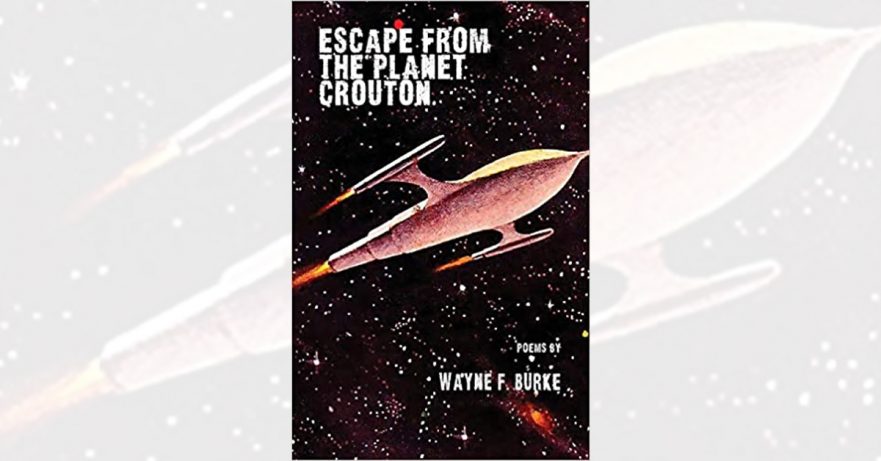 Since we run in some of the same writing circles, I’ve known and loved Wayne F. Burke’s poetry for several years now.

To my ears, Burke’s poems tell very American stories. They read like Merle Haggard and John Prine songs, briefly told and with powerful, but relatable images.

With Burke’s latest collection, Escape from Planet Crouton, he has again made lasting poetry out of lonely, desperate, and even unremarkable voices.

In one of the opening poems, “Palmer Method,” Burke writes:

we studied penmanship in school,
wrote long lines of ‘c’s
like waves coming to shore
and ‘e’s like little heads;
Miss Good, 3rd grade teacher
blind as a bat and batty beat our knuckles with a ruler
then loved us up later
with smothering lilac-scented flesh; she
lived alone in a brick house wore a red dress
or else green
one day she broke her yardstick over the shoulders of Jimmy
and the broken half clattered to the floor
and we all laughed
and laughed.

Having been beaten with a ruler and a paddle on the knuckles myself numerous times, I saw and felt each word in this poem. Burke leaves us wondering, too. How did Miss Good love the kids up with her lilac-scented flesh? Was it hugs and kisses after a good whacking? I’m left with the scent of her lilac perfume swimming in my brain. Maybe all the boys and girls liked her beatings. Burke will not solve the mystery for us. Our imaginations will just have to wrestle with it until the end of time.

Poem after poem, Burke captures a little window into a world that is both intensely personal and universal.

“Witness” is a perfect poem:

Bowling For Dollars on TV
Saturday afternoon
my feet up on the cushioned chair
sound of the ball rolling down the
lane,
a knock at the door
I run to answer
two women one big one small
hello, little boy, are your parents home?
My Uncle comes into the hallway,
shoves me aside,
he wears green gas station pants
cuffs dragging on the floor
what do you want? he growls.
The big woman talks. I sniff the musty odor of the
doily stretched across a side window—
we are not interested!
The door slams shut,
the women walk across the road;
Grandma, from the kitchen
asks, who were they?
Jehovah’s Witnesses.
She wipes her hands on an apron:
did you have to be so rough?
Yes! You know they would not fight in the war!
Uncle stomps into the dining room,
peeks through the blinds.
Leno Decensi is talking to them!
Wasn’t he in the navy, Ma?
Smooth roll of a bowling ball
splatters pins in all directions.

This poem is a reverse x-ray of a Norman Rockwell painting in that it portrays the flip side of Rockwell’s paradisiacal scenes. “Witness” does not present a portrait of a nostalgic Saturday morning; instead, Burke describes a world where doors are creaky and don’t always work, where people are imperfect and annoyed. It is not hard to imagine the kid in this poem having a TV dinner while watching Bowling for Dollars. I can see Uncle’s “green gas station pants” dragging on the floor. I can smell the whiskey on his breath. Uncle’s probably pissed about many things. He’s pissed about having to go the door to talk to Jehovah’s Witnesses. And he’s pissed that Leno Decensi talks to them even though he was in the war too.

Burke also explores the life of artists in this collection; Van Gogh, poet Al Dugan, and Jackson Pollock, for example. But Burke treats these celebrity artists with the same sobriety of his other characters. We’re all shitheads and assholes, Burke seems to suggest. Even Pollock, after all, was a nobody from nowhere. Just another loser like the rest of us. Of course, Pollock achieved fame with a little help from his friends. The various guardian mothers in his life seemed to prop him up and propel him to prominence. Thank god for our guardian mothers!

came out of the West
a mamma’s boy who
hung-on apron strings
never cut
he became a child of
the alcoholic NYC night
his brothers took care of him
as did Benton’s wife
(and the W.P.A.)
and other women who
mothered him
and then his wife
who thought he could do no wrong
she promoted him
and he became
phenomenon
perhaps the greatest painter
in America
sneered LIFE magazine
perhaps not
he did not know
himself
chump or champ
after all the drips
had dried
he could not break through
again

I know why Bukowski went to the
racetrack so often:
to be around other people—
be near but
not of
humanity;
and then
return to his typewriter and
cigars
and ubiquitous bottle of
whatever
in his room
alone
a misanthrope and
hater of the herd—
like a god who despises
the material
he works with.

And not unlike my father, Bukowski made a philosophy, a way of life, out of his gambling addiction. And yet, our family was stranded in the NYC projects until we were kicked out by someone who reported my mother’s income. Go figure.

We’re never far from the writer in Burke’s poems. He’s one of us on so many levels: writer, loser, and human being struck with wonder.

when the family reunion party
breaks-up
I head to DENNY’S
for the brown décor
beige curtains
a waitress I have never seen before
and unknown, to me
characters in separate booths
none of whom ask me
how are you doing?
how is your health?
are you still writing?
The lights above are
truck tire-sized
and a character in the
booth beside me has
his grizzled face in a newspaper;
the waitress is the only one
I have to answer to
though a muscled-up black guy
in a corner stares at me
until I stare back…
The hash browns are
dead on arrival, the
eggs in need of resuscitation

And that’s Burke for you. Observer of the human race. A man who knows about people down on their luck. Humans of the American kind. Our stories. If he put them to music, you could tap your foot and hum along with them. Do yourself a favor. Get a copy of Escape from Planet Crouton, turn on some Prine or Haggard, sit back and take the journey.