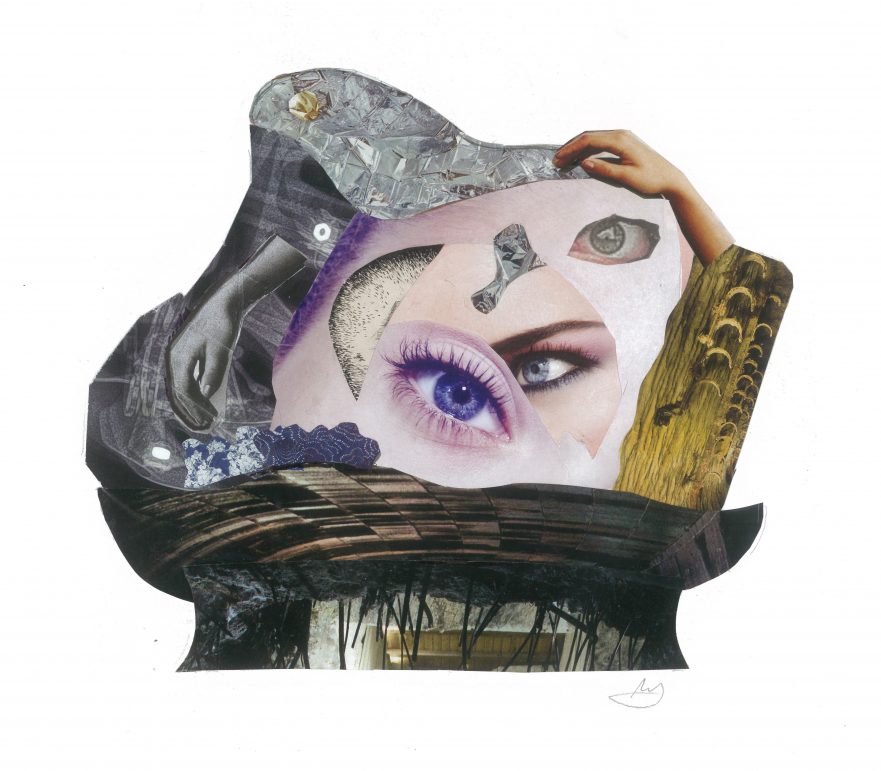 “Art is the path to being spiritual.” 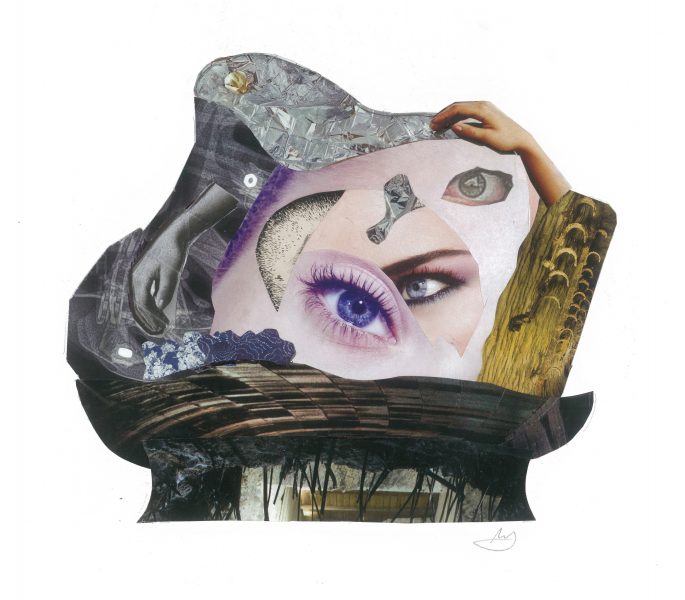 Mad Swirl welcomes the wonderfully mad collages of Ireland-based artist and writer Alan Murphy. Alan’s work manages to be both simplistic and light-hearted and yet layered, complicated & intense all at once. It is hard to say with words what most of them mean but somehow we just know and we’re not really sure what that means either. There is a pleasant sort of calm chaos, a subtle sort of wild whimsy to his work. And we’re pretty sure that’s exactly how we like it. ~ Madelyn Olson

To see all of Alan’s calmly chaotic collages, as well as our other former featured artists (48 in all!), visit Mad Swirl’s Mad Gallery!

This last week in Mad Swirl’s Poetry Forum… we featured a “fuss of muscle and dust;” we fought back a heart attack; we asked to patch it, bury the hatchet; we could not find the lines for states of mind; we compared, to our surprise, disasters to a country’s size; we imagined a day with nothing to say; we were in the know on where poets can go. No borders, no order, no last or first, or best or worst; then the words we have to say will resonate with some this way. ~ MH Clay

Hey J, hope you’re good and doing
Well and happy, at last, to see a response
To your question about the contemporary
Poetry scene. You said you have some
Words you’d like to see out there and so
I thought I’d outline the stars of the lit
Underground as I know it. These are
Poets who don’t like regular big-time
Writing houses and almost all are true
Rebels, punks and outsiders. Perverts,
Drunks, you know my kind of people,
They are all here and if you’re ready
Well here’s some to get you started.

If you’re feeling bold, feeling confident
Thinking this poetry lark is an easy
Deal cos there are so damn few of us,
Think again when you send some words
To Modern Drunkard or Neon my friend.
Both have high standards and publish
Only a few but, as I said, if you feel
Good, then why the hell not start out
Shooting for those stars.

If those 2 fail, don’t despair, all of these
Have even published my words, so the
Chance for selection is obviously just
A little bit higher. These guys operate
Underground but if they do give you a
Go you’ll get one of their great contributor
Copies. So, look around at these greats
And take a giant step towards immortality;
Paper & Ink ran by young Martin out of
Hastings, England, is a corker and usually
Themed. Alien Buddha is a madman
Who always seems to pull together the
Right people to make every issue so so
Cool. Concrete Meat is Adrian Manning,
A legend, a hero of this here UK underground.
Into Mudhoney and Tad and a damn fine
Poet he’ll certainly read your stuff if he wants
To. HST was born outside Melbourne,
Australia but now comes out of Salt Lake
City and is headed by the degenerate pervert
Arthur Graham. I say all of this with a
Love for his words and his downright lust
For life. Razur Cuts is Derek, an old
Punk from Falkirk, and he’s done 7 issues
Now and everyone is brutal, dark and just
Really great. The Chiron Review is a
Thing of legend, published Quentin Crisp
And Charles Bukowski in the past, and if
They want to publish you, hell yeah, I got
Drunk for a week after they accepted 1 of
Mine.

Then there are those who act like a loud
Speaker allowing you to get your words
Out to the world. These are all great great
People and have published some of the
Best around; Rusty Truck, Empty Mirror,
Ramingo’s Porch, Bareknuckle Poets, Rye
Whiskey Review, Dope Fiend Daily, the
Beatnik Cowboy, the mighty Record ran by
The wonderfully friendly Godfrey from
Downtown Chicago and then finally the
Home of the crazies and the first to get my
Words out there, the glorious madness of
Dallas’ Mad Swirl where I still dream of
Reading at their open mic.

editors note: A call to rebels, punks and outsiders. Thanks, Bradford! Come read with us… – mh clay

Forget the meaning of “this” or “that.”
Imagine no language,
an entanglement of minds,
confused as tree branches
reaching for the sky,
not understanding or sure
they want to.

About the Size of Wales by David Punter

Statistics pour out about an epidemic
and what will happen when the medicine fails –
we’ll have a large pool of contamination.
It could be about the size of Wales.

And then there’s America’s prison population
spilling from penitentiaries and jails.
Don’t tell us – the newsreaders can mime it for us –
the remains would be about the size of Wales.

The hurricanes that devastate each seaboard
will take years of replanting, but all that pales
beside the inland wastage, the deserted landscapes
which just might be about the size of Wales.

We set about the oceans for vacation,
with diesel engines in the place of sails
and what do we discover – a sea of plastic
which is, mysteriously, about the size of Wales.

Out there among the planets, there is Venus
(just visible beneath its ghostly veils)
with unexplored asteroidal craters
which are (surprise surprise) the size of Wales.

For a small country, it might seem weirdly mobile
as it sits uncounted on the scales;
but the question appears to remain unanswered:
What actually is the size of Wales?

To roll up
To move on
To flee

editors note: We’re all refugees on this rock. – mh clay

ROOM OF FORGIVENESS by Vern Fein

Open the door.
Gingerly.
Who might be there?
It is the stuff of restless dreams.
Recall the Grimm tale
sisters who
spat vipers or
spoke jewels.
Go inside anyway.
See who is sitting on the sofa.
Stare back at the pain.
Open your mouth.
Say it.
Even if ashes fall on the floor,
Together you can sweep them up.

you tell me about your father
dead at 49

we are all just trying
to keep moving

our hearts under attack
every minute of every day

love isn’t a speeding train
but more of a ceasefire
set to music.

A Strange Satisfaction by Joe Cottonwood

Drywalling, yes, it’s shitwork
but to do right you have to respect
the craft of it. Big dumb sheets
of gypsum. Dimpled nails. Mud,
gray butter. Paper tape can wiggle
like worms. A glorious fuss
of muscle and dust.

Smooth or texture,
whichever, an art.
Loud bad music,
essential to the task.
The notes embed,
remain as echo.

Satisfaction that lingers,
the quiet pleasure of a simple wall
built well. But press an ear
to the surface, long after,
hear the hammer, the music
like laughter.

We all need something & if your need is for a read, then heed this post!

Short Story Editor Tyler Malone summed up like this:

“We all live to find ourselves in our own situations, never anyone else’s. “

Here’s a few lines to give you the gist of this in-need read: 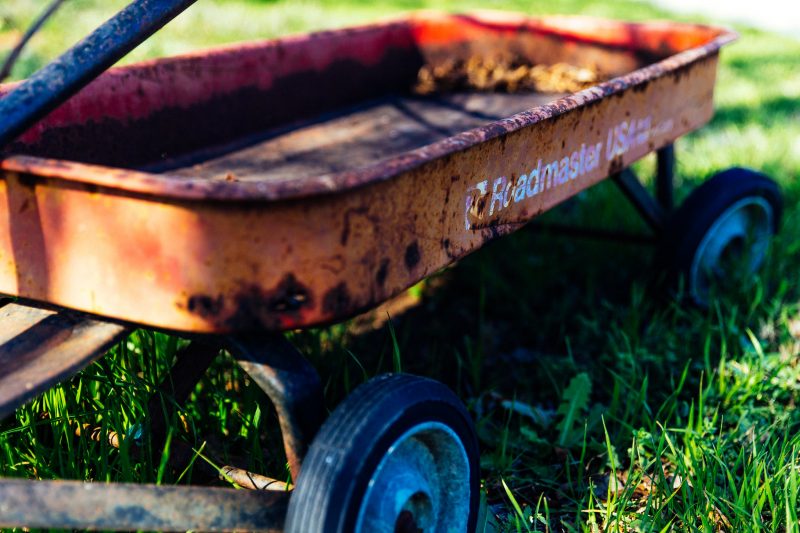 (photo “Carry On, All Wayward Sons” by Tyler Malone)

Jack, seventeen and homeless, still wearing scars across his cheeks from the beatings his stepfather gave him a year ago, tramped along the underground carriages begging for money every day, thankful for the generosity of the odd schoolboy or septuagenarian who handed him some change. Not that it amounted to anything, but being treated like a human, knowing someone cared, helped. It really did. But it was the Ham radio he’d stolen from his late dad’s workroom, that he was allowed to keep in the local church near the park where he laid his head every night, that really gave him something to live for.

After a day’s begging, depending on which band he used, he could talk across town, around the world or out to satellites in space. He could even bounce signals off the moon.

”Foxtrot, Delta, Six, Tango, over,” Jack repeated three times as he fished for someone to connect with on a low frequency. Sometimes he would talk to drowsy truck drivers trekking across the nation as they tried to distract themselves from falling asleep at the wheel. Other contacts included Ukrainian footballers, Hollywood directors, paraplegics, fashion bloggers, cartoonists, builders, jazz singers, hippies. Everyone, just everyone. Jack mostly listened to others’ conversations, however, gaining emotional sustenance from listening while keeping quiet because he was ashamed of himself and his position in life. Until Amy contacted him, that is…

Get the rest of this fatalistic tale right here. 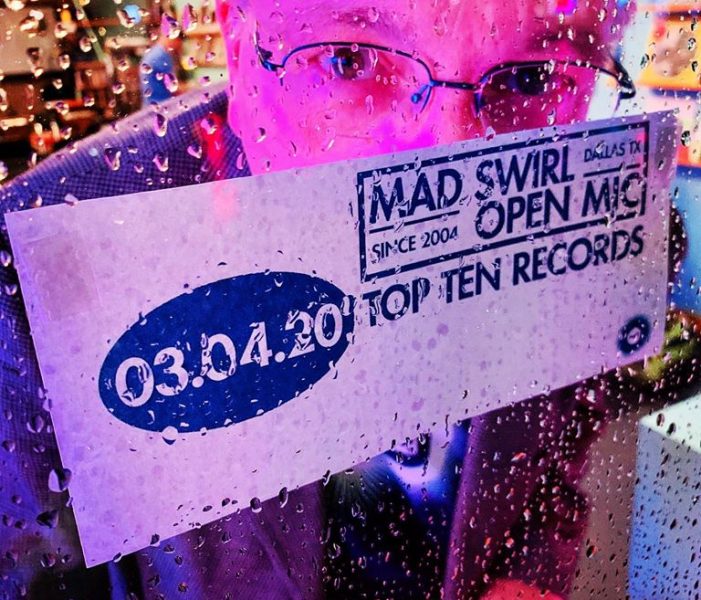 This past 1st Wednesday of March (aka 03.04.20) Mad Swirl whirled up our open mic madness! Once again we did our thang at the historic Top Ten Records!

HUGE GRATS to Lily Taylor at TTR for welcoming us Mad ones these past few months. Our time there has been mighty fine and we wouldn’t “trade” it for anything. But those mad “winds” are blowing us in a new direction starting April 1st (no fooling!) Stay tuned for more news on that…

A huge shout out to all you mad poets, performers, artists and musicians who helped swirl us up some googily madness!

Here’s the Mad ones that contributed helped us Swirl-abrate by sharing their poetic & musical gifts with us:

Thanks to ALL WHO CAME to support our creative collaborative love-child & share in this lasting night of poetry and music!